Special arrangement for Dashain in Janakpurdham 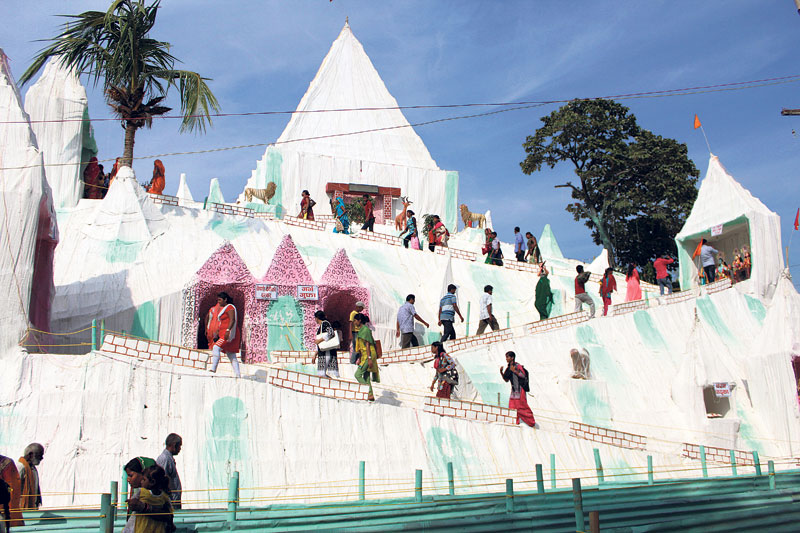 JANAKPUR, Oct 6: With the renovation of the ancient Rajdevi temple of Janakpur just completed, special arrangement has been made here for Dashain celebration. Huge number of devotees throng the Rajdevi temple during Dashain every year.

“It was on the verge of collapse. It needed renovation since ages, but it could be done only now,” said Dharbendra Sah, president of Mahabir Youth Committee. “It is the main temple during Dashain,” he added.

The temple now wears modern design with shining marble and tiles inside and outside.

Sources said that the cost of the renovation and the cave construction was almost Rs 1.5 million. “Due to deep-rooted faith in the temple, it was not hard to collect funds. People were quite willing to donate,” said Sah.

The temple is popular among both Nepalese and Indians. Construction of the new cave is expected to draw bigger number of religious tourists this year.  Former president of the committee Jitendra Prasad Sah stated that special bhanjans and other functions started from Ghatasthapana. “This time, everything is special than the usual Dashain. Cultural groups have come all the way from India for this,” he said.

Another attraction in the area is ‘Sasto Bazar’. From daily commodities to home appliances and several other essentials have been showcased and offered in the market at cheaper rates. Shiva Shankar Sah, president of Market Management Committee said things are affordable even for poor people. “The market is not just for the rich ones. Even those with thin pockets can shop here. So customers come even from India,” he said.