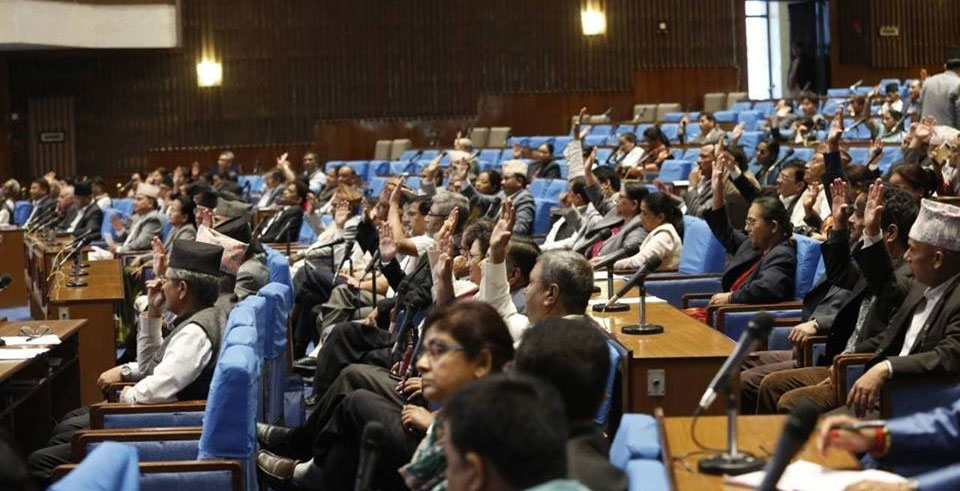 Participating in the special hour of today's meeting of the House of Representatives, Khand demanded implementation of the constitutional provision, saying the constitution has clearly mentioned that speaker and deputy-speaker should be from different genders and different political parties.

Similarly, Whip of Communist Party of Nepal, Khagaraj Adhikari, said that it was an irrelevant issue frequently raised by NC over the issue of the Speaker and Deputy Speaker of the House of Representatives as the speaker and deputy speaker have already resigned from their parties and now they represent no parties.

Likewise, Yogesh Bhattarai of CPN suggested to hold discussion with Chinese side regarding export of Nepali cardamom during Prime Minister KP Sharma Oli's China visit as it would become a medium to maintain balance trade deficit.

He said, "There is a huge trade deficit of Nepal. More than 100,000 farmers of 47 districts of the country have now been producing cardamom worth more than Rs 10 billion. It will help maintain balance in trade deficit if Nepali cardamom gets market in China."

Demanding to declare Taplejung as super zone of cardamom, Bhattarai urged the government to make arrangement of direct export of cardamom in Bangladesh.

NC, Madhes parties at odds over share of Province 2 seats

KATHMANDU, Oct 26: A serious dispute has surfaced between the ruling Nepali Congress (NC) on one hand and  Madhes-based parties Rastriya... Read More...

Reach conclusion either on content or process: Speaker to parties

KATHMANDU, Dec 30: Both the ruling and the opposition parties have been unable to make any headway toward ending the month-long... Read More...