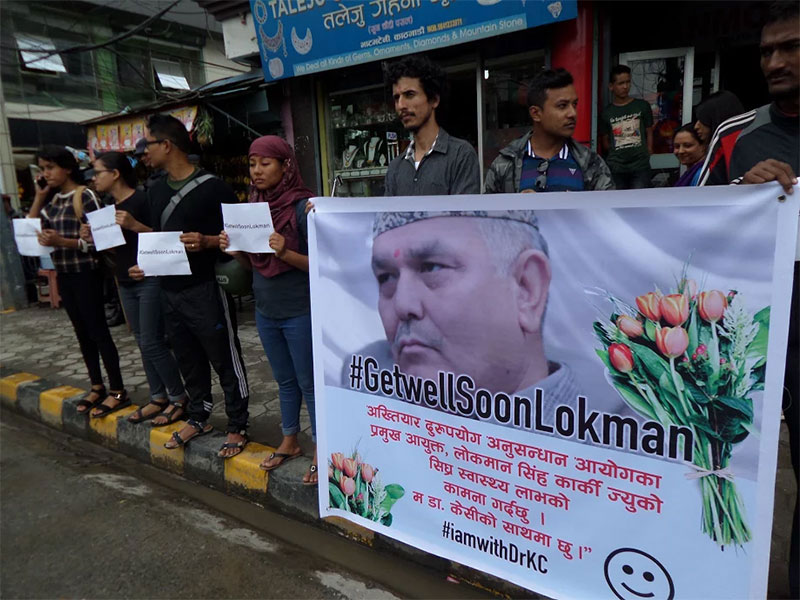 In his three years in power, Karki has done nothing praiseworthy on corruption
In July, CIAA chief Lokman Singh Karki snubbed the parliamentary Good Governance and Monitoring Committee’s call to appear before it and clear the air regarding the allegation that the anti-graft body had intervened in the post-graduate entrance examinations of Kathmandu University School of Medical Sciences. Karki, who made his way inside the powerful Tangal Durbar through the back door, ignored the call. The anti-graft body chief remained absent since “doctors have suggested that I don’t speak for a week”. Instead, he found time to attend an anniversary of a private television operator, according to media reports. Karki did not even feel the urgency to send any other commissioner to attend the parliamentary meeting.

This was not the first incident of the anti-graft chief undermining the sovereign parliament. In November 2014, Karki had refused to appear before the parliament’s Agriculture and Water Resources Committee, arguing that the constitution mandated him to attend the hearings of only the Good Governance Committee. In doing so Karki was clearly undermining parliamentary oversight.

In the past, parliament’s agriculture and finance committees became helpless when a defiant Karki refused to clear air regarding his decision to scrap licenses of over a dozen hydropower projects, in breach of the energy ministry’s jurisdiction.

Finance committee members had Surendra Pandey and Janardan Dhakal accused the anti-graft body of breaching its jurisdiction and undermining the parliament. Later, both the lawmakers were summoned by the CIAA on charges of accumulating disproportionate amount of property. They were among other politicians, bureaucrats and civil society leaders who were also summoned by the CIAA. They had all stood against Karki’s appointment as anti-graft chief.

Karki, who has himself been accused of accumulating disproportionate properties during his government service, was also disqualified by the Rayamajhi Commission from holding public position after finding him responsible of suppressing the 2006 people’s movement. But he still managed to secure top post in Tangal Durbar. His appointment was made in 2013 when there was no parliament. So his appointment was never endorsed.  Civil society leaders, second-rung leaders of major parties and media had stood first against his appointment, but in vain.

In his three years in power, Karki has done nothing praiseworthy on corruption. The new constitution prevents the anti-graft body from investigating ‘improper conduct’ of public officials. The plan to expand CIAA’s jurisdiction by bringing army, judiciary, political parties and I/NGOs under its ambit are now ‘put on hold’.

Karki’s unruly and arrogant behavior has ultimately weakened the once-trusted CIAA. Further, he has focused on singling out his enemies who opposed his appointment, those government officials who created obstacles in profit-making business of his family members and those who were unsupportive while he was commanding the bureaucracy.

Senior officials of the Office of Attorney General who have handled the anti-graft body’s property investigation department, say they never saw complaints against individuals currently implicated by CIAA in corruption charges. Instead the 350 complaints registered at anti-graft body regarding illegal accumulation of properties have not been investigated.

Dr Govinda KC, a crusader against anomalies in medical sector, has become a fresh target, immediately after he began his fast-unto-death demanding Karki’s impeachment. Dr KC had accused Karki of abusing his authority to benefit medical colleges operated by his relatives. Breaching anti-graft body’s jurisdiction Karki’s officials conducted post-graduation entrance exam of Kathmandu University School of Medical Sciences. Later, it was reported that the son of a member of the Examination Board, Bhagwat Nepal, has toppled the examination.

Kedar Bhakta Mathema, a reputed educationist, resigned from the KU senate in the context of ‘CIAA intervention’. This has exposed growing irregularities in medical sector.  Dr KC’s supporters have accused Karki of abusing his authority to increase MBBS quota (from 75 to 135) to KIST Medical College where Karki’s brother Balman Singh is a shareholder.

According to them, CIAA officials raided Health Ministry and Nepal Medical Council reportedly to put pressure on them to increase MBBS quota for the college.

On the other hand, Karki gave a clean chit to former ANFA chairman Ganesh Thapa, sidelining a probe report of the parliamentary Public Accounts Committee. The parliamentary probe panel had concluded that at least Rs 580 million was misused during Thapa’s two decades-long stay in the office. CIAA officials themselves have been accused of bribery, but Karki rarely booked them. Instead he transferred them to lucrative offices.

The growing differences between parliament and anti-graft body have already proved costly. Lack of accountability and transparency in CIAA’s modus operandi has had an insalubrious impact on government functioning. The whole of bureaucracy and civil society is demoralized because of CIAA’s fear.

Tired of CIAA’s wrongdoings, Dr KC has launched a peaceful protest demanding Karki’s impeachment. A group of lawmakers have registered a motion of public interest in the parliament, asking lawmakers to address the demands raised by Dr KC. Most parliamentarians, who have themselves been involved in various financial wrongdoings, seem scared to speak against the anti-graft body. They should show some guts and break their eerie silence and in the process regain public faith.

Sophia, the first humanoid robot to speak in Nepal

KATHMANDU, Mar 20: Sophia, the first humanoid robot acknowledged as a citizen of the Kingdom of Saudi Arabia is arriving... Read More...

KATHMANDU, May 3: World leaders, at the United Nations Sustainable Summit held in September 2015, adopted the 2030 Agenda for... Read More...

100 Days: Tokyo Olympics marked by footnotes and asterisks
20 minutes ago
Biden set to withdraw U.S. troops from Afghanistan by Sept. 11
57 minutes ago