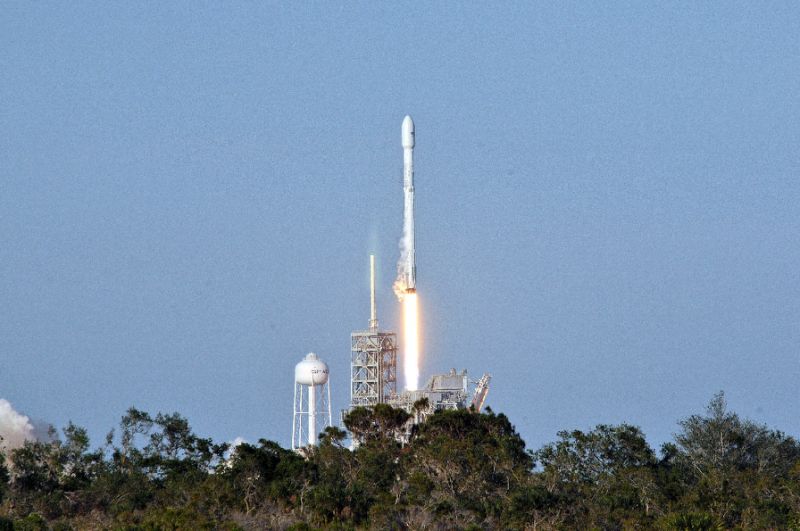 MIAMI, March 31: SpaceX chief Elon Musk hailed a “revolution in spaceflight” after blasting off a recycled rocket for the first time Thursday, using a booster that had previously flown cargo to the International Space Station.

Experts cheered the launch as a “historic” moment for spaceflight, particularly private industry, as companies like SpaceX and its competitors scramble to lower the cost of space travel.

The slightly scuffed Falcon 9 rocket soared into the sky over Cape Canaveral, Florida at 6:27 pm (2227 GMT), on a mission to send a communications satellite for Luxembourg-based company SES into a distant orbit.

Its tall, columnar portion known as the first stage, or booster, had propelled the unmanned Dragon cargo ship to space in April 2016.

About 10 minutes after launch, cheers erupted at SpaceX mission control in Hawthorne, California as the re-used rocket powered its engines and landed upright on a drone ship in the Atlantic Ocean marked with the words “Of Course I Still Love You.”

The landing marked the ninth successful touchdown of a first stage rocket for SpaceX — six on ocean platforms, or drone ships, and three on land.

It also marked the first time a single rocket booster had ever been launched — and landed — twice.

SpaceX, the California-based company headed by visionary entrepreneur Musk, has for 15 years been honing the technology of powering its boosters back to careful Earth landings on solid ground and in the water.

The goal of the entire effort, Musk has said, is to make rocket parts just as reusable as cars, planes or bicycles.

It is also a key part of his plan to one day establish human colonies on Mars.

“It is an amazing day, I think, for space (and) as whole for the space industry,” Musk said in a video message after the launch.

“It means you can fly and refly an orbital class booster which is the most expensive part of the rocket,” he added.

“This is going to be ultimately a huge revolution in spaceflight.”

Currently, millions of dollars’ worth of rocket parts are jettisoned after each launch.

SpaceX officials have said that reusing hardware could slash costs — with each Falcon 9 launch costing over $61 million — by about 30 percent.

While the exact life of the re-used boosters is uncertain, SpaceX hopes they could be redeployed as many as 10 or 15 times.

SpaceX competitor Blue Origin, run by Amazon.com founder Jeff Bezos, has also successfully landed its New Shepard booster after launch, by powering its engines to guide it down for a controlled, upright landing.

Praise and congratulations for SpaceX poured in on Twitter.

“Congratulations on another historic launch,” the US space agency NASA wrote on Twitter.

“DARPA facilitated the first SpaceX launch, and now commercial space is coming into its own.”

As for the cost of Thursday’s launch, Martin Halliwell, chief technology officer at SES, has declined to say publicly the exact amount.

However, he dismissed “naysayers” this week and stressed the historic nature of the launch on what he has described as a “flight-proven” rocket.

“This is obviously hugely exciting,” he told a press conference.

When the mission was announced in August, Halliwell said the deal “illustrates the faith we have in (SpaceX’s) technical and operational expertise.”

The SES-10 satellite was sent to a geostationary transfer orbit, flying as high as 22,000 miles (35,000 kilometers) above Earth.

The satellite aims to expand television, internet and mobile connections across Latin America.

SES confirmed that the launch had successfully deployed its satellite, and congratulated SpaceX on sticking the landing of the rocket.