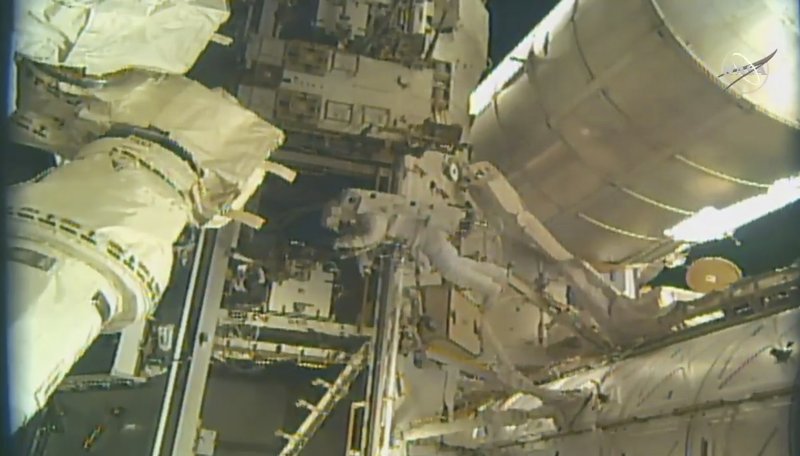 This photo provided by NASA, astronauts Andrew Morgan and Nick Hague (not seen) begin to install a docking port delivered by SpaceX last month outside the International Space Station on Wednesday, Aug. 21, 2019. The port will be used by SpaceX and Boeing once they start launching astronauts to the orbiting lab late this year or early next year. (NASA via AP)

NASA astronauts Nick Hague and Andrew Morgan had to deal with multiple cables to install a docking port delivered by SpaceX last month. It will be used by SpaceX and Boeing once they start launching astronauts to the orbiting lab late this year or early next year.

This is the station’s second docking port for commercial crew capsules. The first was installed three years ago. The newest port replaces one that was destroyed during a SpaceX launch accident in 2015.

It was the third spacewalk for Hague and the first for Morgan, an Army doctor who moved into the station a month ago.

“Docs rock,” Mission Control radioed to Morgan as the spacewalk got underway. The astronaut in Houston communicating to the spacewalkers — who’s also a doctor — added, “Welcome outside.”

Ever since its space shuttles retired in 2011, NASA has been limited to Russian rockets for getting astronauts to the space station. While U.S. commercial deliveries have been running smoothly since 2012, crew flights from Cape Canaveral remain on hold.

SpaceX launched its first crew Dragon capsule with no one aboard in March. The capsule was destroyed the following month during an engine test in Florida. Despite the setback, SpaceX still aims to squeeze in its first test flight with astronauts by year’s end.

Boeing intends to launch its Starliner capsule without a crew this fall, followed by a test flight with a crew sometime early next year.