South Korea should coordinate with U.S. to avoid 'misunderstandings' when engaging North: ambassador 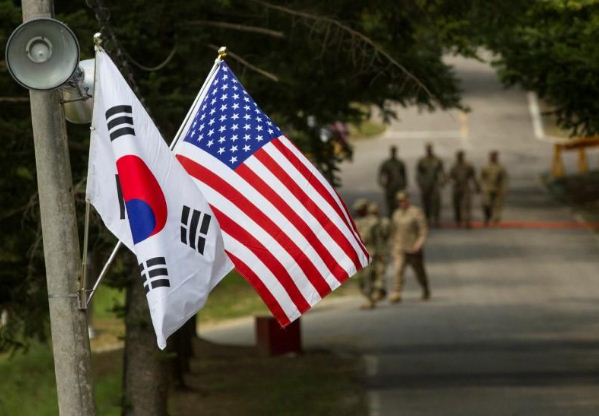 FILE PHOTO: The South Korean and American flags fly next to each other at Yongin, South Korea, August 23, 2016. Courtesy Ken Scar/U.S. Army/Handout via REUTERS

SEOUL, Jan 16: To avoid any “misunderstandings” that could trigger sanctions, South Korea should run any plans to engage with North Korea through a joint working group established with the United States, the U.S. ambassador to South Korea said on Thursday.

Ambassador Harry Harris said that he did not have an official U.S. position on South Korean proposals such as reopening individual tourism to its northern neighbor, but that it is important for Washington and Seoul to consult closely with each other.

As denuclearisation negotiations with North Korea stall, South Korean President Moon Jae-in has said he would seek to move forward on inter-Korean projects as a way to improve ties with Pyongyang.

“In order to avoid a misunderstanding later that could trigger sanctions... it’s better to run this through the working group,” Harris told reporters, referring to a group established in 2018 in a bid to bridge the two allies’ sometimes divergent approaches to North Korea.

“South Korea is a sovereign country and will do what it sees as best for its national interest,” Harris added, noting that it’s not the United States’ place to approve South Korean decisions.

But as South Korea’s biggest ally, Washington has an interest in inter-Korea cooperation and “fruitful” discussions with Seoul are ongoing, he said.

“President Moon’s continued optimism is encouraging. I think his optimism creates hope, and that’s a positive thing,” Harris said. “But with regard to acting on that optimism, I have said that things should be done in consultation with the United States.”

South Korea and the United States are also seeking to narrow disagreements over how much Seoul contributes toward maintaining the roughly 28,500 U.S. troops in the country.

Harris declined to confirm reports that the United States had demanded billions of dollars in additional funding, and acknowledged that a “gap remains” between the two positions.

The current cost-sharing agreement technically expired at the end of 2019, and the top U.S. commander in South Korea is using “residual funds” to try to minimize the impact on about 10,000 South Koreans employed by the U.S. military, Harris said. A mandated furlough notice could soon be issued to those workers, he added.

The latest round of negotiations ended on Wednesday without an agreement.

“We did not reach a conclusion in Washington, so there will be further discussions,” he said. “I think we’re narrowing the differences.”

South Korea’s purchase of U.S. weapons is one factor being negotiated, but Harris said other issues like a U.S. request for South Korea to contribute troops to a Middle East maritime force have not been discussed in the cost-sharing negotiations.

The Vegetarian, a novel written by South Korean writer Han Kang, was published in 2007. Its English translation, however, was... Read More...

KATHMANDU, March 11: A Nepali worker has died due to cardiac arrest in South Korea. ... Read More...