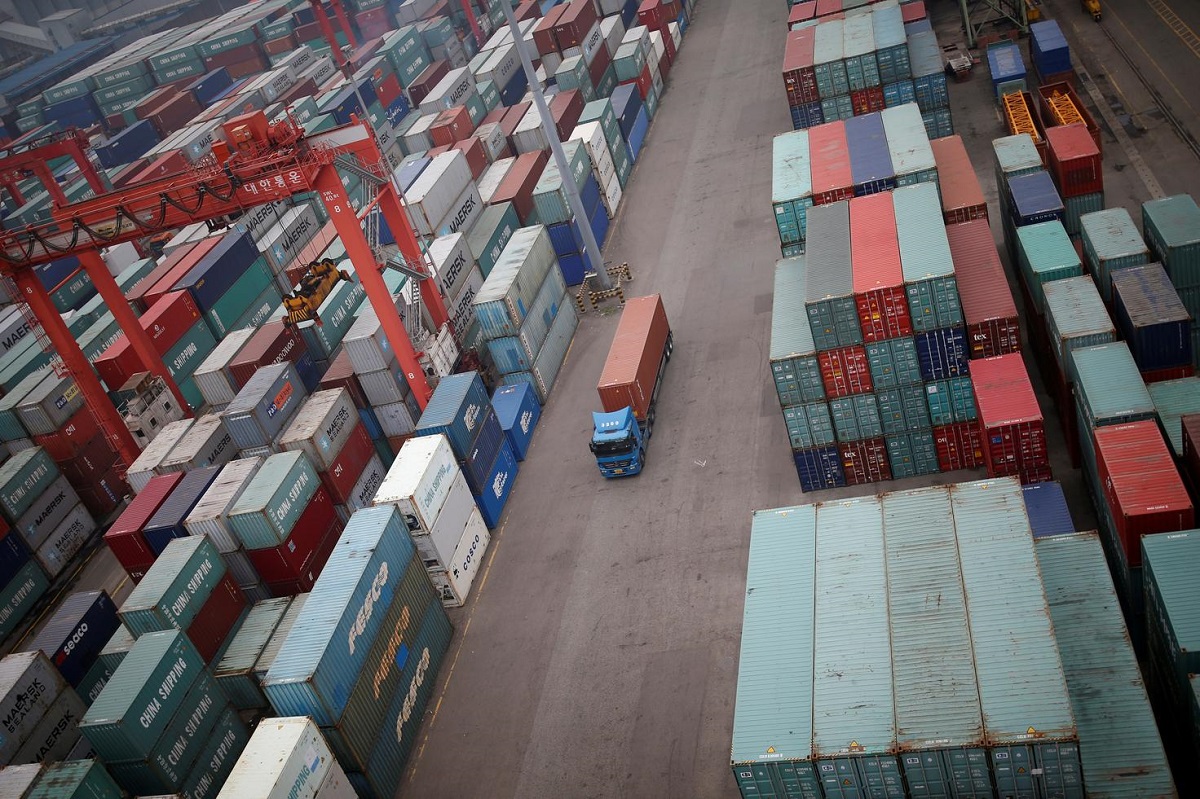 FILE PHOTO: A truck drives between shipping containers at a container terminal at Incheon port in Incheon, South Korea, May 26, 2016. REUTERS/Kim Hong-Ji

SEOUL, May 1: The coronavirus crisis sent South Korean exports plunging in April at their sharpest pace since the global financial crisis, signalling a bleak outlook for international trade as the pandemic paralyses the world economy and shatters demand.

Exports dived 24.3% year-on-year in April, trade ministry data showed on Friday, the worst contraction since May 2009 but slightly slower than a 25.4% fall tipped in a Reuters survey. It slid 0.7% in the previous month.

The average exports per working day, excluding the calendar effect, however, tumbled 17.4%, far worse than a 6.9% fall seen in March.

South Korea, Asia’s fourth-largest economy, is considered a bellwether for world trade and is the first among major exporting economies to release data on shipments.

The grim numbers underline the sweeping impact of the pandemic and points to a rough period for international trade as factories struggle amid collapsing global demand. On Thursday, factory surveys for China, the world’s biggest exporter, showed plummeting export orders.

“May will be extremely difficult for South Korea’s exports. We could potentially see the dip in shipments bottoming out in May should the U.S. and Europe begin to normalise their economies,” said Park Sang-hyun, Chief Economist at Hi Investment & Securities.

“I cautiously expect exports to fall at a slower rate from June, especially on more stimulus from China and as oil prices recover, which should help boost Korea’s petrochemical products.”

A breakdown of the trade data showed overseas sales of the country’s top income earner semiconductors tumbled 14.9%, while those of oil products, car components and wireless devices plummeted 56.8%, 49.6% and 33.4%, respectively.

By destination, shipments to the biggest trading partner China fell 17.9%, even as factories there resumed operations, while those to the United States and the European Union also slumped 13.5% and 12.8% each.

Imports dropped 15.9% in April, reversing a 0.3% gain in the previous month and pushing the trade balance into a $0.95 billion deficit, its first trade gap since January 2012.

More than 3.21 million people have been infected across the world, according to a Reuters tally, with nationwide infections in South Korea surpassing 10,700.

The virus pushed the South Korea’s economy into its biggest contraction since 2008 in the first quarter, while the business outlook slumped to the worst on record.

Many expect the economy to shrink this year, with the International Monetary Fund (IMF) now seeing a 1.2% contraction.

Hobbled by coronavirus, its two biggest trading partners, the United States and China saw their economies contract sharply in the first quarter, suggesting a painfully slow path to recovery for global trade.

Months of pandemic lockdowns across the United States and Europe brought factories to a screeching halt, causing unprecedented disruptions for many Korean businesses including the nation’s global-trotting tech titans.

Samsung Electronics (005930.KS) on Wednesday joined other tech giants such as SK Hynix (000660.KS) in declining to provide annual forecasts because of uncertainty about the pandemic but said it expected profit to decline in the second quarter due to slumping sales of smartphones and TVs.

In a recent note to clients, Capital Economics forecast global trade volumes will tumble 20% in 2020, saying it will be “a dreadful year” as major economies struggle to recover from the pandemic.

South Korea has pledged stimulus totalling about 240 trillion won ($196.73 billion) to tackle the economic slowdown, while markets are betting the Bank of Korea could ease again in coming months.

The BOK cut rates by 50 basis points March - the largest policy easing since the global financial crisis. The bank next reviews its policy on May 28.