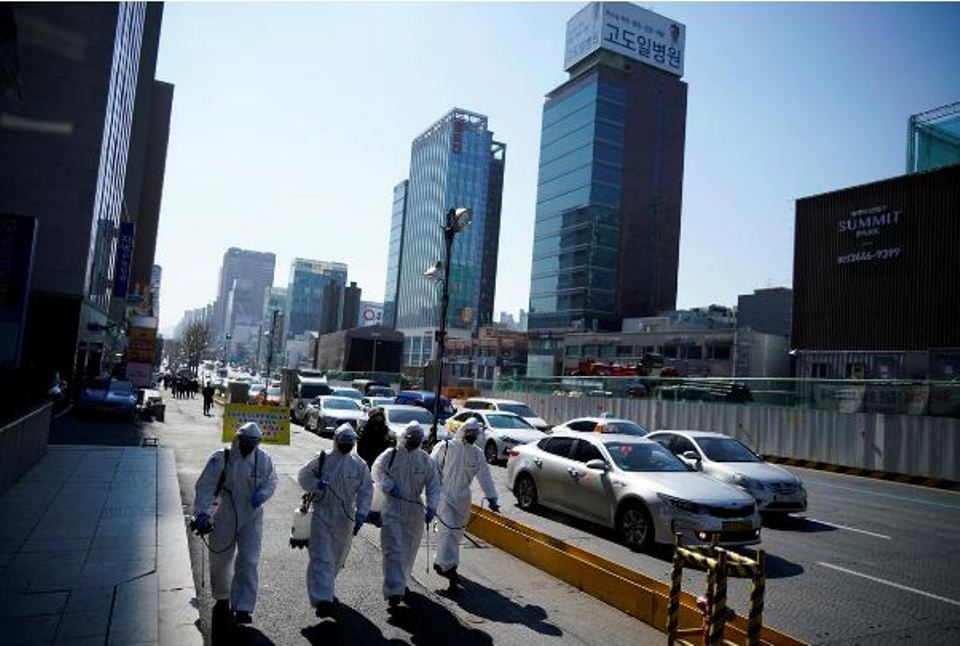 SEOUL, March 5: South Korea declared a “special care zone” on Thursday around a second city hit hard by the coronavirus and the U.S. military confirmed two new cases among relatives of its troops in the country, as it battles the biggest epidemic outside China.

Australia became the latest country to impose travel restrictions on South Koreans, with almost 100 nations now limiting arrivals from the East Asian country which reported 438 new coronavirus cases on Thursday for a total of 5,766.

The South Korean government declared a “special care zone” around Gyeongsan, a city of about 275,000 people 250 km (150 miles) southeast of Seoul, promising extra resources such as face masks and warning against travel there.

Gyeongsan has seen a spike in new cases in recent days, many of them linked to a fringe Christian group at the center of the South Korean outbreak. Similar zones have been declared around neighboring Daegu city and Cheongdo County.

About 75% of all cases in South Korea are in and around Daegu, the country’s fourth-largest city, according to the Korea Centers for Disease Control and Prevention (KCDC).

“Every day is sad and tough like a war. But our Daegu citizens are showing surprise wisdom and courage,” Daegu Mayor Kwon Young-jin told reporters on Thursday.

About 2,120 patients were waiting for hospital beds in Daegu, city officials said. Dozens of newly commissioned military nurses were due to begin work in the city on Thursday, the health ministry said.

The KCDC reported five more deaths from the virus, bringing the total in the country to 37. The flu-like virus that emerged from China late last year has infected more than 95,300 people and killed almost 3,300 around the world, mostly in China, according to a Reuters tally.

KCDC Deputy Director Kwon Jun-wook advised all South Koreans to stay home and avoid “any gatherings, especially those that take place in enclosed places with many people such as religious events”.

Despite the new cases, USFK had resumed sending troops to bases in Daegu and surrounding areas, according to military newspaper Stars and Stripes.

Commanders believed the bases were protected from the outside population, and that the troop rotations were needed to maintain readiness in the face of continued threats from nuclear-armed North Korea, the newspaper reported.

Australia’s move to ban the arrival of foreigners from South Korea is a blow to Seoul’s efforts to prevent the United States from imposing such restrictions.

“It is a deeply regrettable step, and we will closely consult Australian authorities for a swift revocation of the measure and to minimise inconvenience for our citizens,” South Korean foreign ministry spokesman Kim In-Chul told reporters.

South Korean officials met the U.S. ambassador in Seoul on Wednesday to urge the United States not to limit travel. Similar talks would be held on Friday with diplomats from other nations, the foreign ministry said.

According to the U.S. State Department, anyone with a fever of 100.4 F (38 C) is already banned from boarding direct flights from South Korea to the United States.

Korean Air Lines said on Thursday it would screen all passengers departing Incheon airport for high temperatures and reject those deemed a risk.

SEOUL, May 1: The coronavirus crisis sent South Korean exports plunging in April at their sharpest pace since the global... Read More...