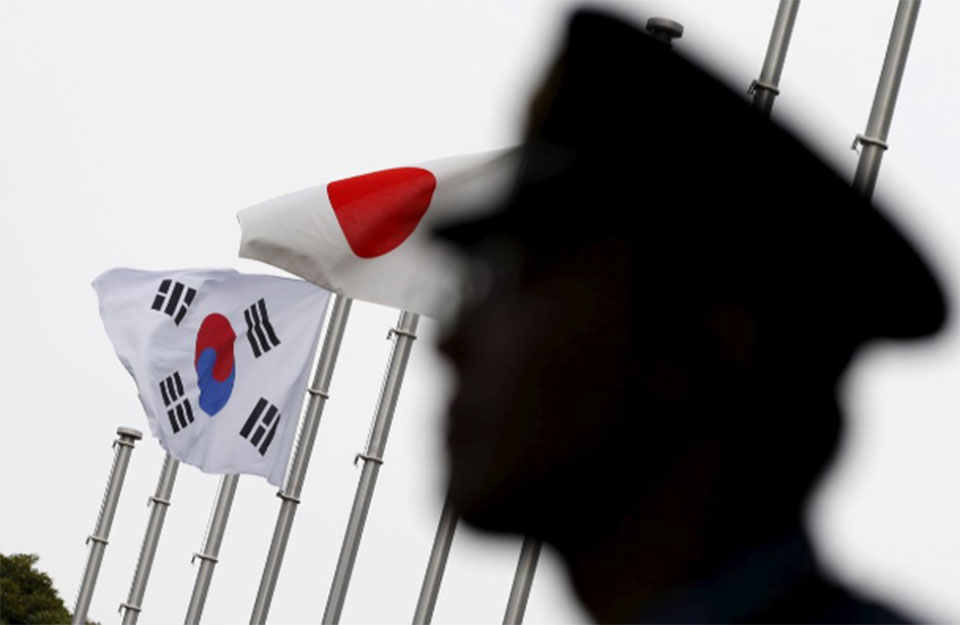 FILE PHOTO: A police officer stands guard near Japan and South Korea national flags at a hotel, where the South Korean embassy in Japan is holding the reception to mark the 50th anniversary of the normalisation of ties between Seoul and Tokyo, in Tokyo June 22, 2015. REUTERS/Toru Hanai/File Photo

SEOUL, July 24: South Korea protested on Wednesday against a Japanese plan to remove it from a Japanese list of countries that face minimum trade restrictions, saying it would undermine their decades-old economic and security cooperation and threaten free trade.

Japan’s planned revision of a law to take South Korea off its so-called white list comes amid a deepening row over compensation for wartime forced labor, and after Japan tightened curbs this month on exports to South Korea of high-tech materials used for making memory chips and display panels.

South Korea’s industry ministry said in a statement Japan’s removal of South Korea from the list would be a very grave matter that would undermine their economic and security partnership.

“It is a very grave matter that shakes the foundation of South Korea-Japan economic partnership and Northeast Asian security cooperation that has been maintained and developed for more than 60 years,” Sung Yoon-mo, the South Korean industry minister, told a briefing.

“Removal of South Korea from the white list of countries is against international norms and we are worried about its serious negative impact on global value chains and free trade,” Sung said.

Japan is due to decide on a revision of its list after canvassing public opinion, which is due to be done by Wednesday.

Officials at Japan’s trade ministry were not immediately available for comment.

Questions over the list come after Japan this month tightened restrictions on exports of high-tech materials to South Korea.

The restrictions came as Japan complained of the erosion of trust with South Korea after a South Korean court ruled last year that Japanese companies had to pay compensation to South Koreans forced to work in Japanese factories during Japan’s occupation of the Korean peninsula from 1910 to 1945.

Japan believes the compensation issue was settled under a 1965 treaty and the court ruling violated international law.

Japan’s top government spokesman said on Wednesday relations with South Korea were in a “very severe” state and Japan would continue to urge South Korea to take appropriate action over a string of issues that have frayed ties.

U.S. tech industry groups with members including Apple sent an open letter on Tuesday to Japan and South Korea calling for a quick resolution of their dispute.

“Non-transparent and unilateral changes in export control policies can cause supply chain disruptions, delays in shipments, and ultimately long-term harm to the companies that operate within and beyond your borders and the workers they employ,” the business groups said in their letter.

Japan has threatened to drop South Korea from the list of countries that face minimum trade restrictions under a trade control law, which would require Japanese exporters to seek a license for certain items they want to sell to South Korea that could be used in manufacturing weapons.

There are 27 countries on Japan’s list including Germany, Britain and the United States.

South Korea has stepped up diplomatic efforts to get Japan to scrap its trade controls, asking major ally the United States to help, though it has not rushed to step in.

South Korea officials are expected to raise the matter in talks with U.S. national security adviser John Bolton who is in Seoul.