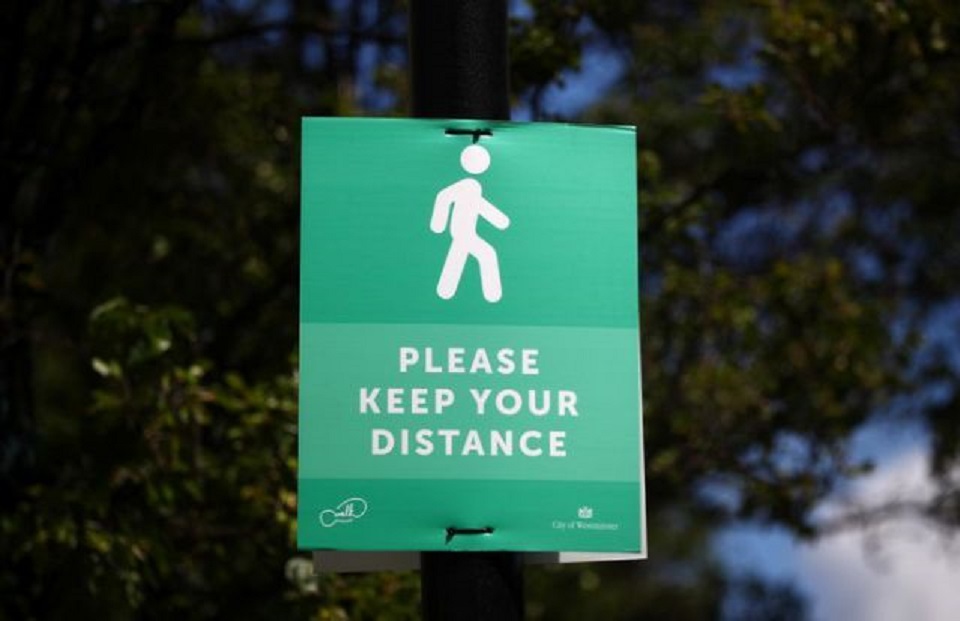 A social distance sign is pictured, amid the spread of the coronavirus disease (COVID-19) in Oxford Street in London, Britain June 14, 2020. REUTERS/Hannah McKay

LONDON, June 19: Hospitalised COVID-19 patients of South Asian ethnicity in Britain are 20% more likely to die from the disease than white people, a large-scale study said on Friday, the latest evidence that minority groups are disproportionately hit by the virus.

The preliminary results showed that hospitalised South Asians were 12 years younger on average and generally had fewer pre-existing conditions.

Although patients in the group were more likely to have diabetes, four-fifths of the increase in mortality was unexplained.

“South Asians have 20% increased risk of death. Part of that risk is explained by diabetes, but part of it is not,” said Ewen Harrison, Professor of Surgery and Data Science at University of Edinburgh.

Explanations could be that more South Asians work in jobs where they would face a higher viral load, such as health and care, or genetic differences which made the group biologically more susceptible to the disease, but more work needed to be done, he told reporters.

Data from the Office for National Statistics on Friday supported the idea that ethnic minorities are more at risk from COVID-19, although whether it is because certain groups are more likely to contract it to start with, or are more susceptible to it, is still unclear.

Harrison said other ethnic minority groups did not have statistically significant higher chance of dying among patients in hospital in the study.

“We see higher rates of intensive care admission and have the need to go into ventilator in black and Asian and other minority ethnic groups, but that’s not translated into an increased risk of death,” he said.

He added that the study did not consider whether groups were more likely to catch the coronavirus to start with, which could explain higher death rates from COVID-19 among other minority groups.

The study used data from 260 hospitals and enrolled 34,986 patients, although the preliminary findings had not been peer-reviewed.

KATHMANDU, May 17: The government has warned of taking action against those hospitals asking COVID-19 patients to arrange medical oxygen... Read More...

LONDON, April 5: High fatalities from the coronavirus will continue in the United Kingdom for at least another week or... Read More...

Efforts being made to bring the RSP back in govt: Minister Sharma
51 minutes ago