South Africa pushes lead over England to 290 in 2nd test 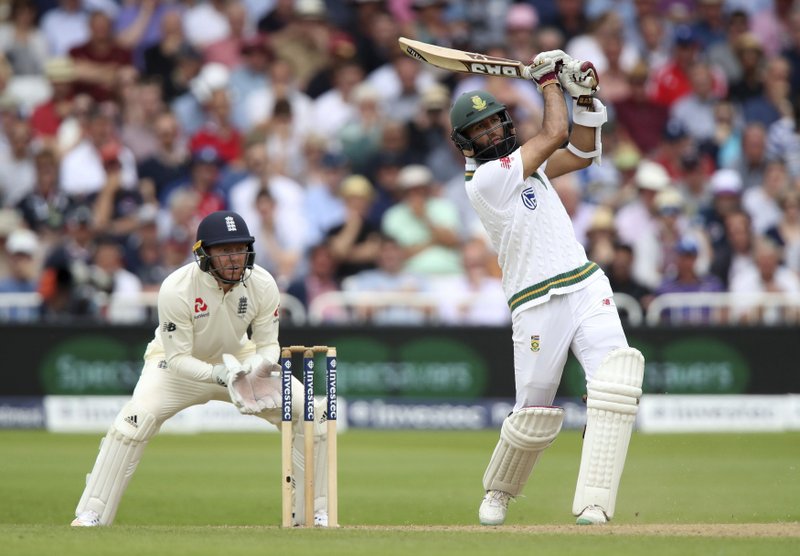 NOTTINGHAM, July 16: South Africa pushed its lead over England to 290 in the second test on Sunday despite losing two wickets in two overs just before lunch.

Hashim Amla was 61 not out — after surviving what appeared to be a faint edge behind when on 25 — and was the anchor in South Africa’s second innings. The tourists reached 160-3 at the end of the first session on the third day, giving them a good chance of leveling the four-match series.

Amla and opener Dean Elgar (80) took their second-wicket partnership to 135 before England finally broke through, with Ben Stokes utilizing the short ball tactic to unsettle Elgar and force him to spoon a catch to James Anderson at short backward square leg.

Anderson removed Quinton de Kock caught behind for just one in the next over, the England seamer’s seventh wicket of the match.

But with Amla set and eyeing a big score, South Africa’s lead was already nearly 100 more than England’s first innings total with seven wickets in hand. South Africa captain Faf du Plessis (4 not out) was the new batsman alongside Amla.

Amla had a let-off early in the day, though, when it seemed he got a thin edge behind to Jonny Bairstow off Stuart Broad. That would have stopped the Amla-Elgar partnership in its tracks, but umpire Simon Fry said not out and England didn’t go for a review.

England was bowled out for 205 on Saturday in reply to South Africa’s first innings of 335, giving the Proteas a big advantage at Trent Bridge.

England won the first test at Lord’s by a convincing 211 runs.