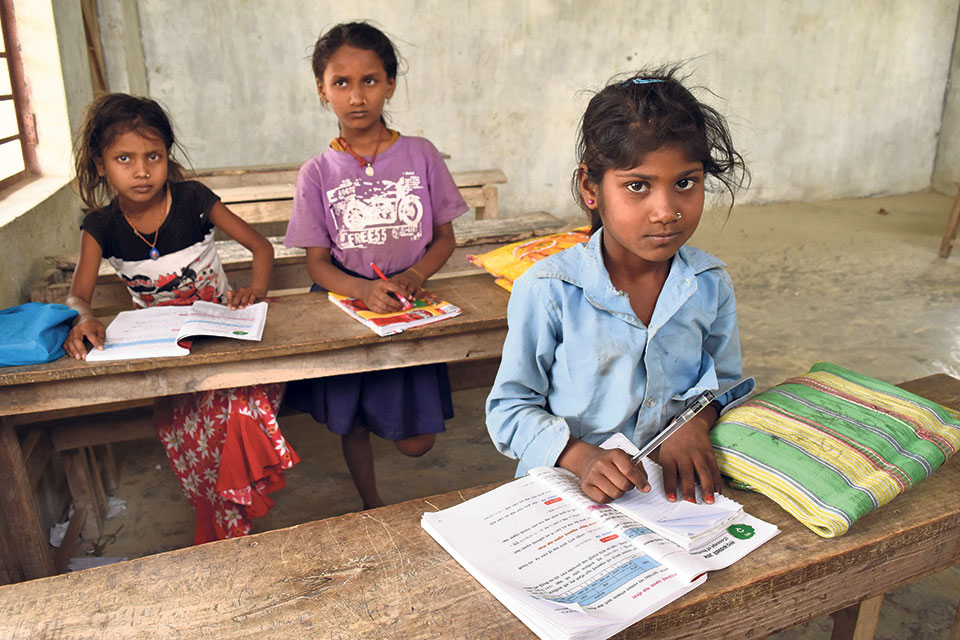 Fifth graders unable to read and write their names

SIRAHA, May 19: Despite being enrolled in school for the last five years, Santoshi Kumari cannot read and write her name. She had joined school when she was five years old and now she is 10. However, the fifth grader was never taught alphabets in school. She admits was not regular to school either.

“I cannot write properly, I cannot even read,” said Santoshi. “Madam tells me to open my book and read it, but how can read when I don’t know how to read?” questions the student of Rastriya Adharbhut Vidyalaya located at Khairwana village.

When asked what she learnt in those five years in school, she did not give a clear answer. However, one thing was pretty clear that she was never properly taught to read and write.

According to the principal of the school, Anirudhha Yadav, it is the responsibility of the class teacher to teach the students. But some class teachers are not serious about their duty, according to him.

“If students are not able to read and write, it is the failure of the teacher. They must have skill to teach,” said Yadav. “But there are some technical problems as well,” he added.

Students are promoted to higher classes irrespective of their performance. These days, students are not expected to repeat classes. They are promoted whether they fail or get through the examinations, said Yadav.

“And due to this new trend, we are helpless when students get promoted to higher class although they are not fit for it,” added.

Meanwhile, Santoshi reported that her teachers do not teach in Nepali. They translate lessons in Maithali and then teach the students.

“We do not understand Nepali very well. But we do not know how to write in Maithali either. Our teachers translate texts into Maithali and explain to us. Sometimes, they do not teach at all, they only talk in the classroom,” she narrated.

It is not Santoshi alone in the school who has difficulty in reading and writing. Several students from her and lower classes were unable to read and write their names. They reported that they play in school most of the times.

“We sit in classroom only once in a while. Teachers are not regular either,” Santoshi said.

According to Binita Yadav, class teacher of sixth grade at the school, there are lots of problems due to the lack of resources. “For instance, we don’t have enough classrooms. So we mix students and teach them in the same room,” she said. “So, the lower standard students are there just for the sake of attending classes. They often get busy in playing and we cannot force them to study,” she added.

Meanwhile, a local of the village Sanjay Yadav complained that it is a matter of attitude of teachers, rather than the lack of resources. According to him, the teachers who are paid salary under government quota are not worried about their job security.

“So they are just cool. They do not feel the need to deliver their duties properly. Nobody monitors them, nobody forces them to be sincere,” Sanjay said. “It is pathetic that students of fourth or fifth grades are not able to read and write their own names. If you go to private schools, they learn thousands of things by that time. That is why you should not send your children to community schools,” he added.

There are several schools in Siraha which reflect this level of sorry state. In the primary level, students are promoted to the next class irrespective of their academic performance in class. And this has done a lot of harm than any benefit, according to a local school teacher Ram Chandra Yadav.

“The government policy says that you cannot fail children in the primary level. They have to be given access to the higher classes. But when you have not learnt lessons which you are supposed to learn in the lower class and have jumped into higher class without any skill, you are bound to face even graver challenges there. How can students cover up if promoted that way?” he asks. Ram Chandra added that compromising the quality has hit children’s education.

“The situation of most of the community schools is just the same. They are studying in higher classes, but they have no quality. The teachers are not serious and the students are not serious as well,” he stated.

Until and unless the government develops strong monitoring mechanism to check quality of community schools, the situation is not going to change, Ram Chandra further noted.

A total of 422 community schools are in operation in the district. According to the data of the District Education Coordination Unit, 164,502 students from grade one to 12 are enrolled in those schools. Community schools are consistently losing their students to private institutions.

KATHMANDU, July 2: After the end of the decade long Maoist insurgency, five schools were established in each development region... Read More...

KMC will continue its programs according to its policies: Mayor Balen
24 minutes ago