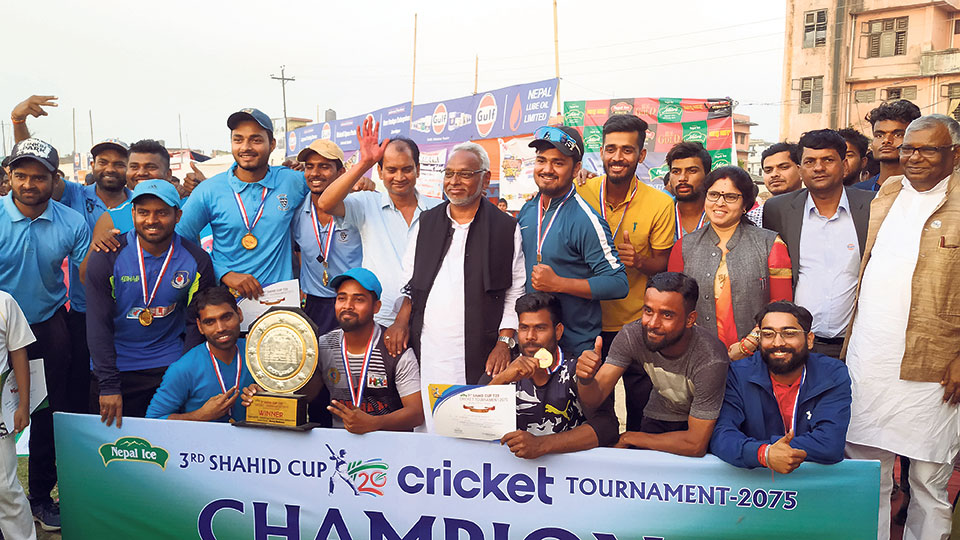 KATHMANDU, April 3: Kanpur’s Saurav Singh scored a match-winning 50 runs in the final of the 3rd Shahid T20 Cup cricket tournament to propel his team Sonnet Cricket Club to a victory by seven wickets against the home team Janakpur Cricket Club in the final match played at Barahabigha cricket ground in Janakpurdham on Tuesday.

Singh smashed four boundaries and two sixes during his 40-ball stay chasing the target of 114 runs in the final. He was aptly supported by Shuvam Gupta’s unbeaten 34 runs from 38 deliveries, which included five boundaries. Both batsmen shared a match-winning partnership of 74 runs for the third wicket, which eventually sealed the win.

Janakpur pace bowler Rahul Pratap Singh picked up two wickets in the four overs he bowled in the match but couldn’t enforce a win for the home team. Similarly, left-arm spin bowler Samsaad Sheikh picked up a wicket. Ram Naresh Giri, Bishal Sushling, and Hari Shankar Sah were wicket-less in the match.

Earlier, Janakpur won the toss and elected to bat first in the final. The home team scored a total of 113 runs for the loss of seven wickets in 20 overs. Skipper Anil Mandal top-scored with 36 runs from 40 deliveries including two boundaries and a six. He was supported by Samsaad Sheikh’s 21 runs and Kunal Kishor’s 16 runs in the lowly total. Sunil Sah remained unbeaten on 15 runs.

The player of the final match Shivam Dixit picked up three wickets to rock the Janakpur innings. He was supported by Aman Tiwari’s two and Mohammad Wasid’s one wicket in the match. Dixit, who was also elected as player of the match in semifinal, conceded 25 runs from four overs. His tally of total nine wickets in the tournament also garnered him the best bowler award for the event.

Birgunj’s Haseem Ansari was adjudged player of the series for total 99 runs and 9 wickets for United Cricket Club in the tournament. His team-mate Saif Ali Hawari was adjudged the best batsman for scoring a total of 131 runs in 82 deliveries.

Janakpur’s Bishal Sushling was honored with emerging player of the tournament for his total of 70 runs and 5 wickets.

KATHMANDU, Sept 29: A total of 179 players registered for the Pokhara Premier League (PPL) T20 Cricket Tournament to be... Read More...

Over 1.4 million doses of Moderna vaccine arriving today
6 hours ago

Refinance loans of Rs 8.99 billion given to pandemic-hit businesses during mid-July and mid-November
2 hours ago

Three people killed in jeep accident in Lamjung
3 hours ago