Sonam Tamang: The man who saved dozens of lives 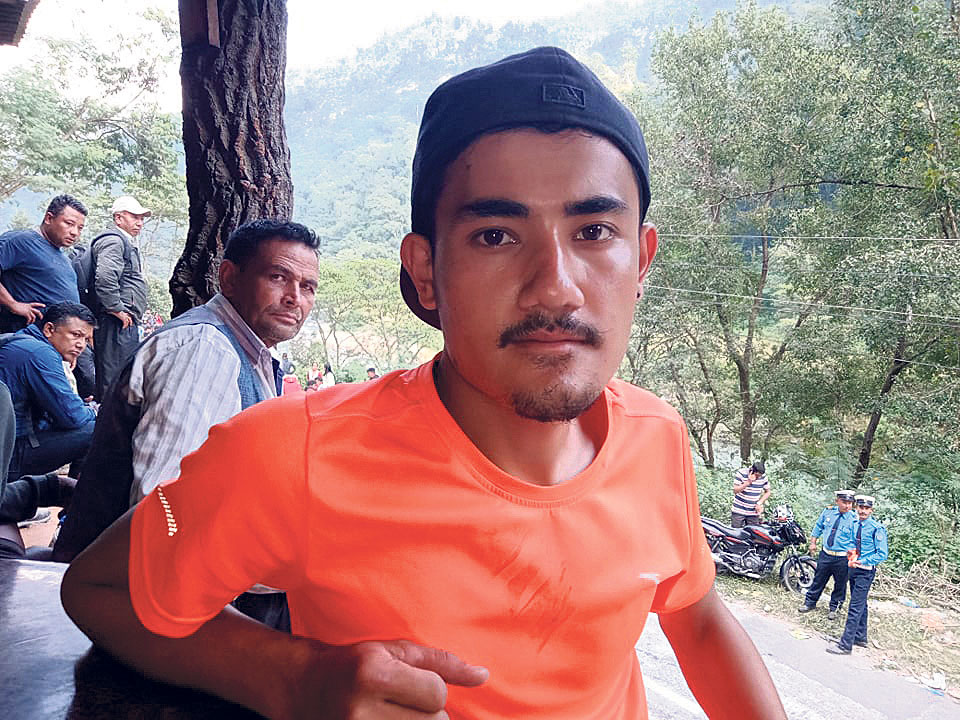 SINDHUPALCHOWK, Nov 6: Sonam Tamang is all over the internet since Sunday garnering praises for his courageous effort in saving lives of dozens of passengers – stuck in Sunkoshi River after a bus accident on the same day.

The bus accident claimed the lives of 18 passengers, and left more than 50 injured.

Tamang, who is 22-year-old, is a rafting guide by profession. Tamang has rafted on the Sunkoshi River for hundreds of times. Rafting is more challenging than how adventurous it seems.

A rafting guide faces minor accidents regularly. Sometimes the rafting boat flips upside down, and sometimes passengers fall in the river after failing to follow instructions from the guide. And the guide has to rescue rafting enthusiasts fallen into the river.

Tamang, who has been practicing rafting for the last seven years, has faced these kinds of challenges several times. These rescue skills he learned over the years played a crucial role to save several lives on Sunday.

“The skills are useful in emergency situations,” Tamang said, remembering the bus accident of Sunday. Tamang works for Sukute Beach. He was at the Sukute Beach, while the ill-fated bus (Ba 2 Kha 7245) skidded off the Araniko Highway and plunged 20 meters down into the Sunkoshi River at Sukute of Chautara Sangachowkgadi Municipality-9 in Sindhupalchowk. As no rafting was scheduled during the time, Tamang was just roaming around the Sukute Beach area. The bus plunged down the river just in front of Tamang’s eyes.

When Shyam Shrestha, manager of the resort, was about to direct Tamang to get ready for rescue operation, he was already prepared with rafting boat to get into the river. Tamang went to the incident scene with four other rafters. The incident spot was just 30 meters away from the Sukute Beach.

As there was no time for delay in rescue operation, Tamang along with other rafters jumped into the Sunkoshi River without life jacket, helmet, and other safety instruments. Tamang reached the incident scene within two minutes.

“The accident was deadly. Blood of victims and killed passenger was flowing on the river. The river had turned red with the victims’ blood. Passengers were floating in the river. They were screaming,” Tamang remembered, adding passengers inside the bus were crying.

According to him, he rescued 10 passengers, who had jumped of a window of the bus. But, some passengers were denying to be rescued as their family members were inside the bus. Tamang forcefully pulled them on the rafting boat.

Tamang was continuously rescuing the passengers flowing in the Sunkoshi River. Suddenly, Tamang saw a hand waving from the bus – submerged in the river. He then reached the spot and dragged the passenger out of the water.

“The passenger was a woman, and she was holding a child on her lap. That scene was heartbreaking,” Tamang said. By that time, a total of six-seven rafting boats had already arrived at the incident scene for rescue.

“We sent injured passengers to the hospital by loading them into every vehicle coming through the highway. By the time police officials came, majority of passengers were already rescued,” he added.

Tamang further said that rescue operation was possible as the bus plunged just near the Sukute Beach.

“The incident is very heartbreaking, but I am glad that I was able to save some lives,” Tamang said while becoming emotional remembering the turn of events on that fateful day.

Tamang’s life has been full of challanges. He completed his schooling from Belfi School in Belfi Rural Municipality-4. It was difficult for him to continue his studies because of his financial condition. To continue studies, he started working at Sunkoshi Riverside. He worked for two shifts – morning and night. The riverside also used to operate rafting. Tamang used to take rafting boat and other safety materials to the river to help the guide. “While helping the guides, I learned rafting,” Tamang said. It didn’t take much time for Tamang to learn rafting as he was used to swimming in Sunkoshi River. He learned to raft in just one and a half year.

Tamang then worked as a rafting guide at another resort. After working for five years, he became a rafting guide. Four years ago, Tamang received license of rafting guide from the Nepal Association of Rafting Agency. “I passed the license test after 15 days of class and three days of trial in the river,” he said.

Tamang has already sailed his boat in Karnali, Kaligandaki, Trishuli, among other rivers. Tamang, who is a high school graduate, feels bad for not being able to continue his studies. But, he feels happy and proud to be a rafting guide.

Twenty-six killed in India as bus plunges into well

MUMBAI, Jan 29: Twenty-six people were killed and 32 injured when a bus and an autorickshaw collided with each other... Read More...

Bus collides with truck in Kawasoti

KAWASOTI, Sept 21: 32 passengers are injured in a night bus accident at Madhyabindu Municipality-11, Kusunde in the East-West highway... Read More...