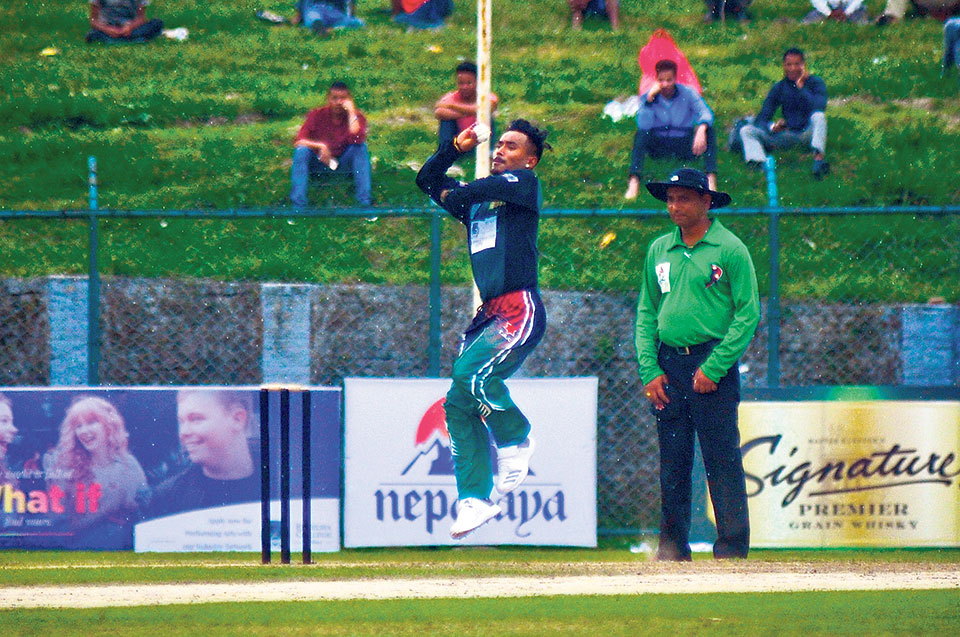 Tribhuvan Army’s Sompal Kami bowls against Province 2 during a Group A match of the Inter-provincial Prime Minister Cup one day cricket tournament at the TU Cricket Ground in Kirtipur on Thursday. Photo: Bijay Gajmer/Republica

KATHMANDU, June 1: An all-round performance from Sompal Kami helped the departmental team Tribhuvan Army Club register its first win of the tournament with a 55-run win over Province 2 in a rain-marred match in the ongoing Inter-provincial Prime Minister Cup on Thursday.

Kami smashed 41 runs off 28 balls including a six and three boundaries, while he also picked up three wickets while defending the total in the Group A match at the TU Cricket Ground in Kirtipur.
Earlier, Army, who won the toss and elected to bat first, presented a target of 245 runs losing all its wickets in 49.3 overs. In reply, Province 2 fell short by 55 runs chasing the revised target of 237 runs in 40 overs after rain intervened in the second innings. It scored 182 runs for the loss of nine wickets.

Raju Rijal top scored for Army registering 50 runs off 85 deliveries which included a six and five fours, while he was supported by Rajesh Pulami Magar, who made 40 runs off 44 balls with two fours and two sixes.

Likewise, Anil Mandal added 35 runs off 65 balls including four boundaries at top of the batting order, while captain Binod Bhandari contributed 23 runs off 16 deliveries comprising of a six and four boundaries before losing his wicket to Rashid Khan. Also, Bhim Sharki and Sushan Bhari added 15 and 12 runs respectively to the total.

Divyanshu Mallick was the pick of the Province 2 bowlers as he claimed three wickets giving away 42 runs in the 8.3 overs he bowled. Khan, Samsaad Sheikh and Mahaboob Alam chipped in with two wickets each.

In reply, only four Province 2 batsmen managed to reach double digits, while four batsmen were out for ducks.

Suraj Patel was the highest run getter for Province 2 scoring unbeaten 48 runs off 48 deliveries including two sixes and six fours. Similarly, Harishankar Shah added 34 runs off 33 balls with a six and four boundaries.

Likewise, Khan also had a good day with bat scoring 34 runs off 40 balls which included a six and three fours, while the wicket-keeper batsman Hasim Ansari added 28 runs off 37 balls with four boundaries to the Province 2 total.

Kami led the bowling attack for Army picking up three wickets and giving away 45 runs in 8 overs which also included a maiden. Likewise, Sagar Pun, Bhari and Shahab Alam chipped in with two wickets each.

Kami was named the man-of-the-match.

The other departmental team Nepal Police Club will take on Province 6 in Kirtipur on Friday, while the other match of the day will see Army play against Province 1 at the Mulpani Cricket Ground.