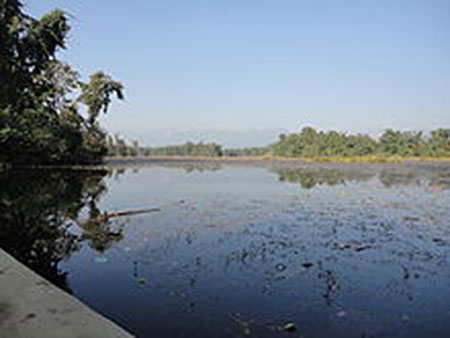 TIKAPUR, April 28: Spot-billed duck, a species of bird that was considered migratory until five years ago, has now become a resident of the Ghodaghodi lake. It has been reported that the ducks, which are a native to South India, started reproducing at Ghodaghodi lake since 2014, making it their permanent home.

The spot-billed duck can be found in Ghodaghodi lake, Chitwan’s Bisahajari area and Lumbini’s Jagadishpur. However, they have been found reproducing only around Ghodaghodi lake, according to ornithologist Dayaram Chaudhary.

As informed by Chaudhary, spot-billed duck is known for inhabiting lakes and laying eggs on the grass on the shore of the lake. The bird species lays 12 to 13 eggs at a time, but only seven or eight manage to hatch.

Ghodaghodi lake has been turning into a popular reproduction area for several bird species. Species like cotton Pygmy goose, and ‘Bagale sim kukhura’ are known for reproducing only in the Ghodaghodi area.

Counting of water birds in Ghodaghodi Lake was initiated in 2007 AD. As of 2019, a total of 1,303 birds belonging to 56 species are known to be living in the Ghodaghodi lake and its surroundings. Ghodaghodi lake is home to several endangered bird species like the great salty woodpecker, the great hornbill, vulture, darter and spiny babbler. Spiny babbler is the bird unique to Nepal.

Ghodaghodi area is also experiencing an increase in the number of bird species year after year. Altogether 226 species were spotted in the area in 2012, which rose to 299 in 2018. Among them, 19 are confirmed to be migratory birds.

Ghodaghodi lake also welcomes several Siberian bird species for three-four months of winter when the birds migrate all the way to Nepal to escape the harsh winter in the northern hemisphere.

Ornithologist Chaudhary has urged Nepal Tourism Board to develop Ghodaghodi lake as a bird sanctuary. He says everyone must join hands in conserving rare and endangered bird species

KAILALI, Aug 8: The birds that were enlisted in the endangered list of the country were recently spotted around the Ghodaghodi... Read More...