Government has no data on returnees

KATHMANDU, June 21:Despite increasing Taliban attacks and high security threats in Kabul's so-called green zone, the government in Nepal in the past ten years permitted over 8,889 Nepali migrants to work as security guards in the Afghan capital.

The green zone, which is subject to high security risks, has of late become one of the major destinations for migrant workers, mainly retired security personnel. The government here doesn't have any mechanism in place to keep tabs on the number of migrant workers returning from Afghanistan.

“We can't estimate the number of Nepali workers in Afghanistan, since we don't have any mechanism to record the number of returnees,” said Joint Secretary Govinda Mani Bhurtel, spokesperson of the Ministry of Labor.

The spokesperson also said that the number of illegal migrant workers going to Afghanistan via the Gulf countries under arrangements by traffickers and manpower agents in Kabul is even higher.

According to the Department of Foreign Employment under the Ministry of Labor, the government allows Nepali migrant workers to go to Afghanistan if they wish to work as security guards mainly for the United Nations and diplomatic missions. The UN and other diplomatic premises are relatively safe with their strict security vigilance.

But since the past two years when most international forces have pulled out of Afghanistan and some diplomatic missions have also evacuated because of insecurity, Nepali migrant workers have been in high demand as security guards amidst the high-profile Taliban attacks even in the protected areas.

Despite the frequent suicide attacks, bomb blasts and gunfights, Nepali workers are drawn by the lucrative salaries of up to Rs 250,000 per month. “We don't prompt them to go to such risky zones but being a member country of the United Nations, we allow them to work in the protected areas,” said Mohan Adhikari, a director at the Department of Foreign Employment.

The soaring number of migrant workers ready to risk working in Afghinastan indicates the unemployment situation in Nepal, said Adhikari.

According to the Foreign Employment Act 2064, about 110 countries are legal destinations for the migrant workers. Iraq and Libya are banned and till a few years back Afghanistan was also an illegal destination. The provisions were revised as per requests from international agencies including the United Nations, according to  labor ministry sources.

Officials have also underlined the provisions for supplying security guards to foreign private companies in conflict zones and  the need for some revisions.

They further said they were planning to set up a desk at Tribhuvan International Airport to maintain records on migrant workers returning home. 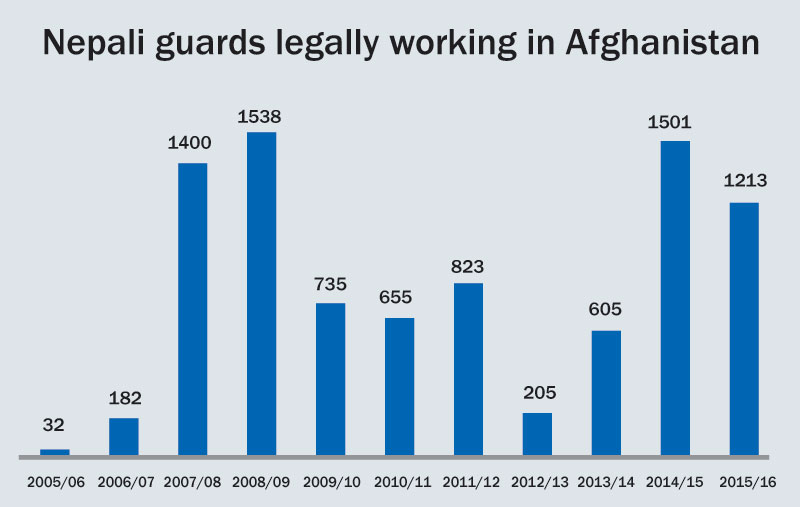 Remembrance of fragrances past: Here’s how some scents get imprinted in your memory

Scientists have found that a brain area is responsible for creating memories from smells as well as retaining those memories... Read More...

Gandaki Province govt to provide Rs 50,000 each to families of people who died of COVID-19 at hospitals
4 hours ago

Benches fixed at SC, hearing yet to start
7 hours ago