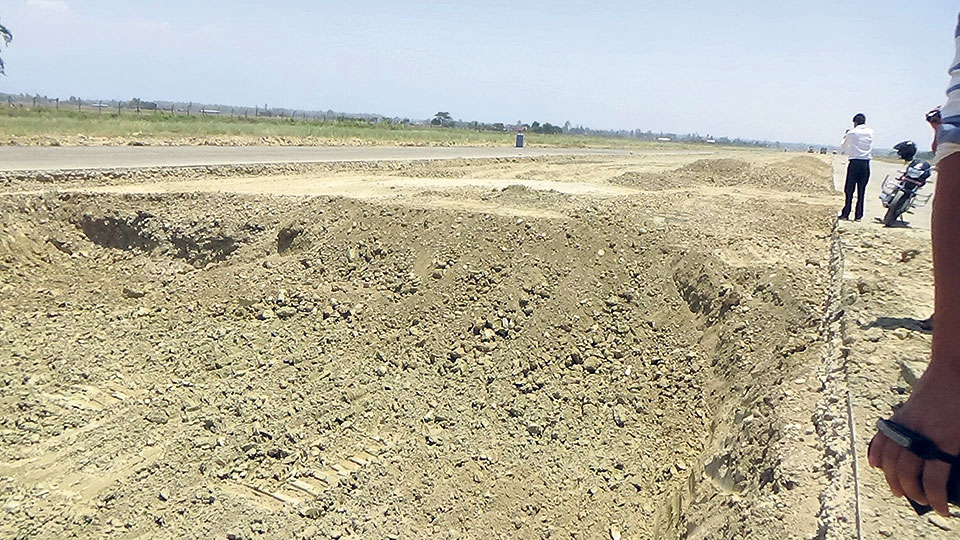 The Dhangadhi Airport which has been shut for a month for repair and maintenance work. Photo: Republica

DHANGADHI, May 26: The Dhangadhi Airport, the only airport in Sudurpaschim Province, has been closed for the last 21 days for the ongoing repair work. Before shutting down the airport for a month, the authorities had assured the locals that the airport will resume its services after 20 days.

Speaking to journalists earlier, Ratan Kumar Shrestha, chief of the Dhangadhi Airport Project, had assured that the airport will come back into operation within 20 days. "As published in the notice, the airport will resume its services by June 4 but we have aimed to complete our work within 20 days," he had said.

However, the sluggish pace of repairs at the airport has worried the people in the province. They say there is very slim chance of this project being completed within the given deadline. "When we visited the airport 12 days ago, they told us that the work will be completed within 20 days. But when we visited it today, were were told that only 27 percent work has been completed so far," said Pushkar Ojha, senior vice-chairperson of Nepal Chambers of Commerce and Industry, Kailali chapter,

The closure of the only airport in the province has affected the people across the province. "Taking critically-ill patients to Katmandu for treatment on time has become a challenge," said Ojha, adding, "This has compelled us to take the patients to India, instead." He says the lack of airline service has directly affected tourist arrivals in the province. According to him, pressure must be exerted from all sides on the project officials to complete the airport repairs at the earliest.

The people of Sudurpaschim are currently compelled to use the airport of Nepalgunj for traveling to various places. Provincial lawmaker Rana Bahadur Rawal stated that the repair work at the airport is disappointing. "It has been found that the work is being carried out without proper estimation and planning," said Rawal, adding, "The airport must be brought back into operation soon."

Though the locals had demanded that the airport be repaired without halting the flight services like at the Tribhuvan International Airport in Kathmandu but the project officials refused to do so, saying that was not possible. Tej Bahadur Budhthapa, chief of Dhangadhi Airport, informed Republica that everyday around 700 passenger used the airport on a daily basis to travel to various destinations.

A total budget of Rs 160.8 million has been allocated for upgrading and blacktopping the airport runway.

ATTARIYA, June 6: The Dhangadhi airport will remain closed for one more week for the upgrading of the runway. The... Read More...