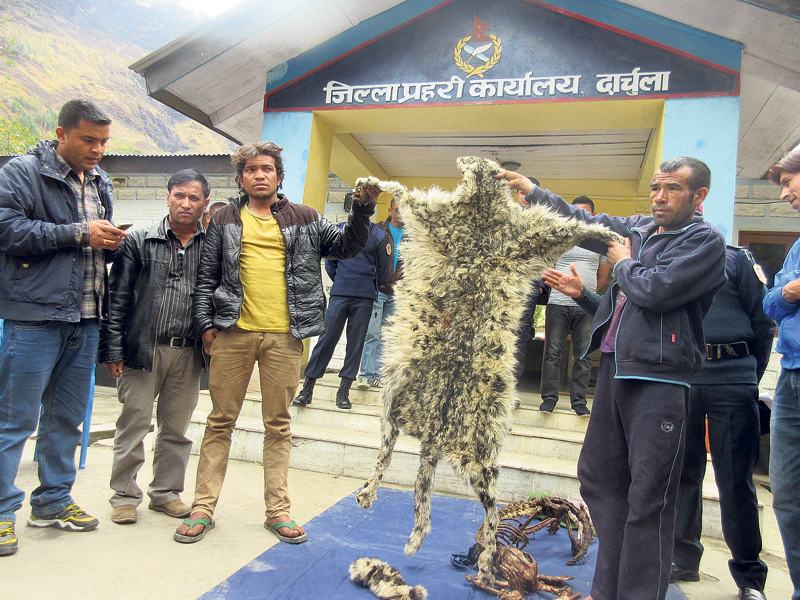 Darchula police makes smugglers public along with a tiger’s hide and bones that they were smuggling. A police team had arrested them from Khalanga bridge on Wednesday. (Photos: Prem Chunara/Republica )

DARCHULA, Aug 18: Smuggling of animal parts and precious herbs through Tinkar border draws headlines every year. Sparse human settlement and absence of government security agencies in the area give smugglers unrestrained opportunity to carry out illegal activities across the border with India.

Locals of Darchula lament that they feel statelessness in their area. Lack of government offices and police posts have let smugglers and other kinds of wrongdoers to thrive here, they remark. Smugglers of animal parts and herbs find it easy to sneak around and carry out illegal activities through the area. Smuggling thrives mostly during the peak period of winter and during monsoon as police posts are not seen in Tinkar during harsh climate conditions.

“As this is a very remote zone, its remoteness has been exploited by smugglers. Last year we were successful in thwarting six smuggling operations in the area,” said DSP Shusil Singh Karki. Elaborating further, he said that the smugglers are part of a trans-national network that spans across India, Nepal and Tibet. He said that not all the animal organs smuggled to Tibet are Nepali products.  Most of these come from India, he said.

Darchula residents feel that the geographical remoteness of their district has been huge barrier for their development. While in one hand, the remoteness has deprived them of basic facilities and development, on the other hand, they are forced to be mere witness of regular smuggling of endangered animals through the district. Stating that they are concerned about conserving their natural resources, they stress on adopting better conservation and preservation strategies for sustainable use of herbs and animals in the higher Himalayas.

“Tinkar border has become popular for all the wrong reasons. Huge amount of organs of animals on the endangered list and rare plants are smuggled across the border. Concerned authorities negligence in controlling has contributed to its growth. Even though security personal should be posted here through out the year, they are not. And it seems that the smugglers have nexus with officials in concerned departments,” a local said requesting anonymity.

According to him, poachers sneak around the hills quite easily and hunt many endangered species of animals along with collecting rare herbs.

Locals admitted that some of them are, of course, used as potters in this illegal business. The porters are supposed to pick up and carry whatever the load is. Most of them don't know what they are carrying or care to ask. So, when a police team cracks on the team, it is usually the porters that fall in the police net, locals said.

Sometimes, it could be poachers. However, even poachers are not the real smugglers. Ring leaders rarely fall in police trap,” said another local who also did not want to be named either.

Locals called on for beefing up security situation in the district through out the year. Lack of security has not only boosted smuggling of animal organs and herbs, but also other crimes.

DSP Karki informed that their investigations have helped them get better idea and information about the smugglers network active in the region.

“Our investigations into smuggling cases have unraveled in-depth details of the smugglers network in the region. We have been closely monitoring smuggling activities across the district. The network active in the region have been carrying out smuggling in an organized manner,” he said.

Karki expressed dissatisfaction over the lack of coordination from locals in combating the crime. “We would made greater strides in curbing smuggling network across the district if the locals would have been more cooperative. Locals shy away from giving information. In fact some even help the smugglers directly or indirectly. This is a serious problem that we are struggling to overcome,” he said.

He said that Tinkar border has been a difficult border for the security forces to guard due to climatic reasons and lack of provisions for setting up permanent security posts.

DSP Chadra Dev Bhatta of Armed Police Force informed that security forces patrol the Tinkar border peak smuggling seasons while conceding that there have been security lapses along the border. “Even though there are far many security posts on the Indian side, they have not been able to control smuggling across the border. On our side, we indeed need to add more patrolling teams and police posts. It's very challenging to operate here, but we are doing it,” he said. Bhatta added that his battalion has recommended for building a permanent police post in Tinkar with concerned authorities at the center.

Timber smuggling in border area on the rise

Life-saving vaccines cannot be the means of maximizing profit: PM Oli
23 hours ago