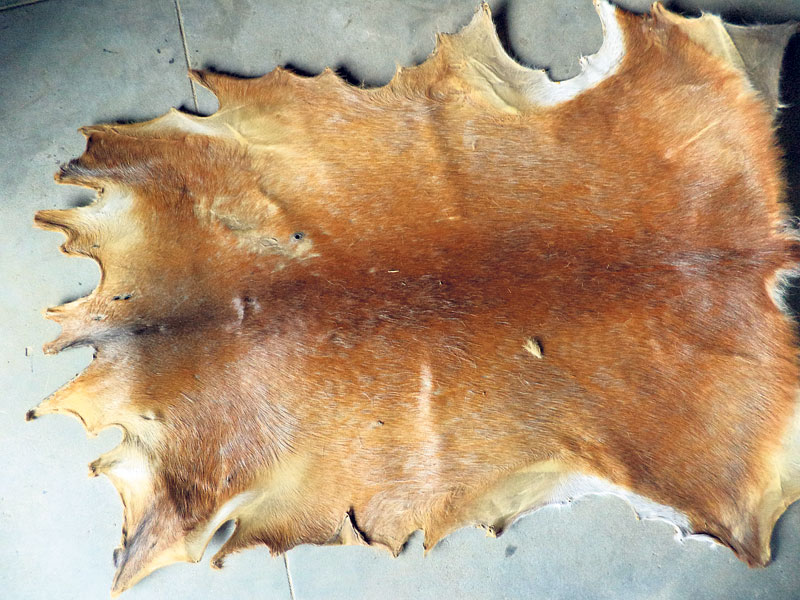 DANG, Oct 18: Tek Bahadur KC and Mukta Bahadur Thapa were recently caught by Nepal Police for possessing animal parts. The duo was held by a police team deployed by the regional office of Crime Investigation Bureau. KC and Thapa were in possession of a bag with tiger skin when they were spotted at a hotel at 11 pm in Lalmatiya of Deukhuri.
"We had deployed our special team as soon as we got the clue that smugglers were around there. The team followed them and finally spotted them at a hotel," said DSP Deepak Shah, chief of the investigation bureau in Surkhet. "The incident happened three weeks ago," he added.

Shah recalls several incidences of catching smugglers in the region. Prior to this, police had taken control of smugglers who were roaming around with deer skin, he said. "We caught Basanta Kunwar of Tripur municipality for possessing four pairs of deer skin," he said.

Sagun Chaudhari of Saudiyar, Dang also landed in police net with tiger skin. "Cases have been filed against those people," informed Shah.

Madhav Timilsina, a staff at the District Forest Office, Dang, informed that 'the smugglers' would be fined certain amount and jailed as soon as they are proven guilty. "However, all this has not stopped smuggling of animal parts," he admitted.

Sources said that smuggling of animal parts is actually going unabated. Skins, bones and other parts of animals are supplied to Tibet and India easily. Red panda, deer, tiger and rhino among others are always the target of poachers, they said.

According to DSP Shah, police cannot say whether the smuggling is on the rise or not. "However, we are making all the efforts to save animals and stop their smuggling," he said. "In the last one year, we caught 10 people involved in smuggling. Weak action against such people encourages smuggling," Shah noted.

Shah further stated that smugglers do not send away the animal parts until they gather those in sufficient quantity. "Huge network is active in this smuggling and we are trying to trace the roots," he said.

Meanwhile, Chief of Dang Police, SP Dhiraj Pratap Singh said that reaching to the smugglers is very challenging as poachers, who are caught by police, keep their lips tight. "Poor people are used as poachers who hand over the animal parts to the smugglers. They have to fulfill certain conditions to get the promised amount," said Singh.

"Poachers do not open up about smugglers. In fact, they do not even keep much knowledge about the real people involved in smuggling," he added.

Body parts of endangered animals sent to Tikauli for barcoding

KATHMANDU, June 30: All confiscated body parts and trophies of endangered animals from across the country have been sent to Tikauli... Read More...

NEA is working on large projects with 2,000 MW capacity: MD Ghising
21 hours ago

Govt has pushed country toward anarchy: Oli
16 hours ago