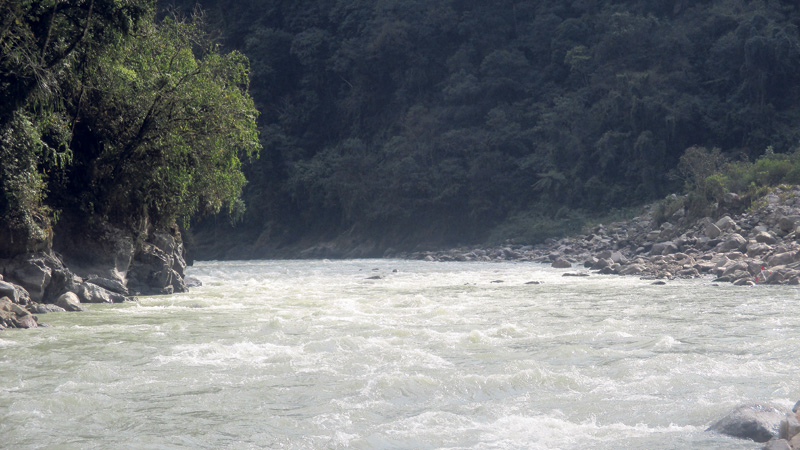 It has already paid compensation to more than 90 percent of 269 project affected locals. Project officials and locals say it is a success story as the land acquisition process has went ahead smoothly.

The process to acquire land in Num, Pawakhola, Pathibhara and Yamphu VDCs had started in mid-July. Now, the process is in the final leg, according to the Khandbari-based office of (APDC).

The APDC has already distributed Rs 1.1 billion in the project affected areas. It plans to distribute another Rs 150 million.

Madhukar Khadka, SJVNL's Consultant for Social and Environment, said that the owners of only 24 land plots of the identified 391 have not received compensation.

Local leaders and project officials give credit of the smooth sail of land acquisition process to Sankhuwasabha Chief District Officer (CDO) Khumkanta Acharya. Yadav Adhikari, a local leader, said that Acharya made it possible through rigorous dialogues with the locals and the project officials. “He also managed to demarcate the access road in land plots which were acquired 20 years ago by the World Bank,” he added.

Talking to media persons on Monday, Acharya said that he held dozens of discussions with the project affected people in to resolve the land acquisition issue.

"I became successful to bridge the gap between the developers' capacity and people's expectation," Acharya said, adding that he has not seen anyone dissatisfied with compensation rate.

Locals were also serious in such discussions as they had already seen the project terminated in mid-1990s. Also, the developer was ready to pay the best price as they wanted to implement the project at the earliest.

World Bank had left the project in mid 1990s due to objection by the CPN-UML which was the main opposition party at that time. The multilateral donor had already provided compensation to several households for land plots to be acquired by the project.

Locals have been paid 65 percent more than the market price of land and assets. The developer has given Rs 825,000 per ropani for barren land. Similarly, it has given 10 percent more for land having irrigation facilities. Likewise, another 15 percent was for land plot suitable for paddy and cardamom farming. The company provided compensation of up to Rs 1.2 million for 200 square meters of land plots suitable for housing. Likewise, cardamom farmers received an additional compensation for three year's yields based on annual yields and current market price.

Besides the compensation for land and other assets, the project also has been providing different facilities to the local community, including special allowance for senior citizens, through Resettlement Action Plan (RAP).

Locals are happy with the compensation provided by the project. Krishna Bahadur Parajuli, a resident of Num-4, received Rs 16 million for five ropani of irrigated land and seven ropani of land without irrigation facility. Parajuli told Republica that the project plans to build site office in land plots acquired from him.

“I am extremely happy. I have bought a new house at Rs 1.5 million,” Parajuli said, adding that he has distributed the remaining amount to his sons. “They plan to buy land plots in Tarai.”

Parajuli says he wants to see electricity generated from the Arun River before he dies.

The project has also imparted financial literacy classes to the project affected households so that they can make proper use of the compensation amount.

“Locals cannot use the money without consulting us and the project office,” he said, adding that the project has deposited the compensation amount in the joint bank accounts opened in the name of at least two family members.

Developing nations' plea to world's wealthy at U.N.: stop vaccine hoarding
58 minutes ago
Afghanistan and the United Nations
1 hour ago