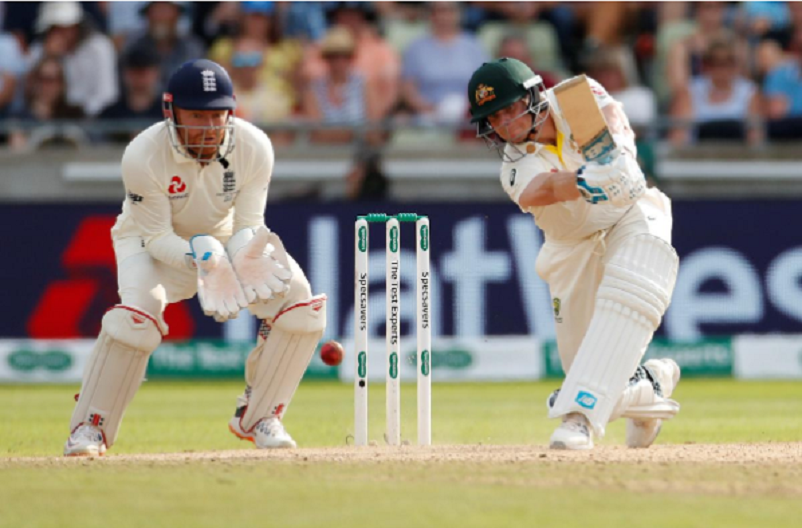 BIRMINGHAM, August 4: Steve Smith’s unbeaten 46 helped Australia recover to 124-3 in their second innings before bad light stopped play with the tourists 34 runs ahead at the end of day three of the first Ashes test at Edgbaston.

England’s first innings resumed on 267-4 as Rory Burns added eight to his overnight score, falling for 133.

However, England lost three wickets in 11 balls before Stuart Broad and Chris Woakes came to the rescue by adding 65 runs for the ninth wicket. England were eventually all out for 374.

The injured Jimmy Anderson was kept out of the bowling attack, with Broad opening, and he soon had his 450th test wicket as he enticed an edge from David Warner (8), with Cameron Bancroft next to go for seven to leave Australia 27-2.

Usman Khawaja (40) batted well before Ben Stokes had him caught behind.

But Smith, who scored a brilliant century in the first innings, once again proved immovable as he and Travis Head (21 not out) stayed at the crease until the umpires took the players off as daylight faded.

“Smithy is battling unbelievably,” James Pattinson said. “The best players stand up when it really matters, and he has done that here against England.”

England started well as Stokes passed 50 in front of a raucous crowd but nicked the ball through to Tim Paine the very next ball.

Burns’ innings then came to an end as he misjudged a Nathan Lyon delivery straight into Paine’s hands.

Lyon struck again in the same over when Moeen Ali was out for a five-ball duck. Australia kept up the pressure as Bairstow was dismissed in the next over for eight, with Peter Siddle claiming the wicket.

The middle-order collapse stalled England’s progress before Broad and Woakes kicked on.

Broad’s longest test innings in six years came to an end as he was caught on the boundary for 29.

Anderson was last to go for three, but the 37-year-old paceman’s calf injury kept him out of England’s bowling attack.

“It is well poised,” Woakes said. “It has been a great match so far.

“We leaked a couple too many tonight. But if we can start early in the morning, with two quick wickets first up then the partnership with Stuart could be a big part of the game.”

England all out for 294 as Marsh takes five wickets

LONDON, Sept 13: England were bowled out for 294 in the first innings of the fifth Ashes test at the Oval... Read More...