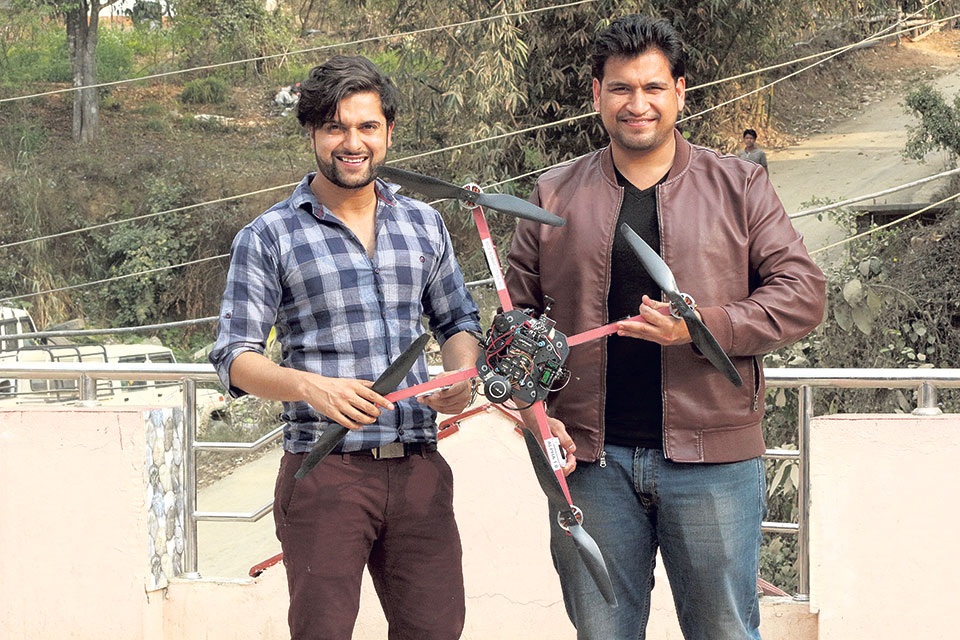 Quite recently two engineers from the start-up company S.S Technologies and Electronics made a drone at Waling Municipality in Syangja district in Western Nepal. This was their attempt to help the municipality develop as a modern and prosperous smart city.

“We got to know that our local body was planning to buy a drone from abroad. As engineers, we offered to make a drone for them at a much lower price and with better facilities,” says Sharad Tiwari, who made the drone along with Sijan Subedi. They were assisted by two more engineers, Ash Narayan Paswan and Ashok Dhamalahawa Tharu, for a span of six months.

Tiwari recently completed his Masters in Technology in Embedded Systems Technology and Robotics Engineering and Subedi is a BE in Mechanical Engineering. They were both extremely passionate about making a difference in Nepal’s remote areas with the help of technology. The concept of making Waling a smart city at the initiation of the local government came as a great opportunity for them.

After their proposal was sanctioned, they were able to complete the drone for just three hundred thousand rupees which if bought would have cost a minimum 13 hundred thousand rupees.
“We did not take any extra labor charge from the municipality. The amount given to us was only spent on research and buying raw materials for the drone,” says Subedi who worked hard for six months with the intension of giving back to the place he was born in.

Even Tiwari feels that they were grateful for the platform they received from the local government. “It feels great when your skills come to use for the betterment of your society. This drone is a small invention but it can make a great impact in Waling’s development,” says Tiwari.

The drone will now be used for various purposes in Syangja. Telemedicine is one of the major functions of this drone. This means it will be able to transfer medical data and information to various parts of this district.

According to Subedi, Waling municipality has 14 wards but not all areas are equipped with good medical facilities. Therefore, they are now constructing various drone spots that will assist in transferring blood and urine samples to the cities. The final reports along with the required medicines will then be transported back to the remote areas.

This drone that can fly up to 500 meters high will also be very effective in government surveillances. According to Tiwari, various developmental activities and construction projects have now been initiated in the municipality. He says the drone can now closely watch these activities and send live videos and photos back to the headquarters.

“This drone will improve the transparency of the work done by the government. It will save the time, energy and resources of sending a team to simply supervise the work,” adds Tiwari.

The drone will also be very useful in times of natural calamities such as floods, earthquakes or landslides. It can efficiently and promptly estimate the amount of damage caused by the catastrophe.

After making the drone successfully, various other municipalities are also approaching them to make more drones. “It feels great to know that such a small invention of ours can have a great impact on our society. We are also researching to make a more powerful drone with many facilities in the future,” says Tiwari.

These engineers are also working towards making an agricultural drone that will be able to survey various land types and spray pesticides and medicines in a short span of time.

In the near future, they intend to teach robotics to high school students in Waling municipality as well. “We always wanted to teach robotics to school students. Now the municipality is creating a lab where interested students from each school can come and learn robotics from us,” says Subedi adding that this way they will train many students who, later on, will be able to make small inventions that will eventually help in bettering their homeland.

Long period of stagnation has harmed RA’s image significantly. Regaining it will be slow and painful but it needs to... Read More...

What was once the preserve of a niche section of society, professional investors, businessmen and the well to do has... Read More...