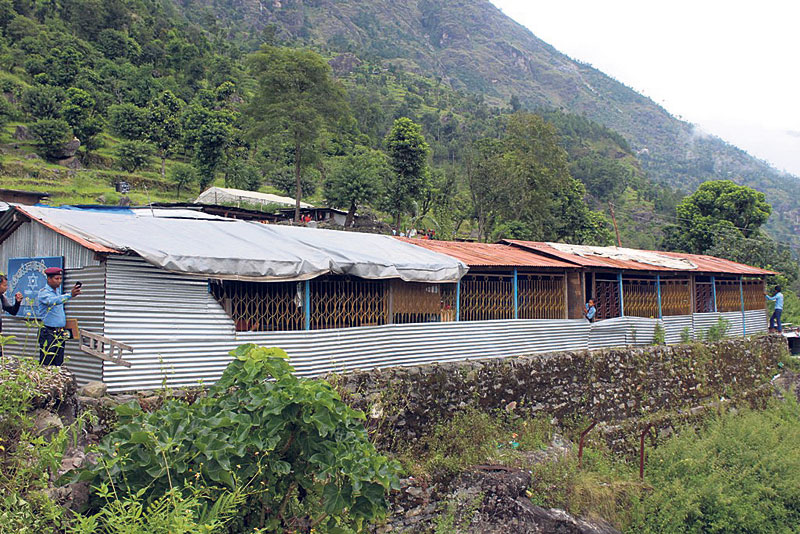 DANDAGAU (RASUWA), Oct 24: Returning to normal life was not something that the victims of earthquake in Rasuwa could believe in the days following the April 25 earthquake last year. They were hit hard socially, economically and psychologically. Among the victims, children were the worst affected as they were forced to face multiple problems without being able to comprehend the underlying problems.

After a one and half month turmoil, government schools in the district were opened for the children. The schools were opened to make the children feel better rather than to teach them. During this period schools mostly focused on organizing extra-curricular activities like singing, dancing or playing in classes run in makeshift huts and tents. Despite this, only a few children attended schools as they were still gripped by earthquake phobia. It actually took months for some children to really feel normal and get back to school.

“When it rains, everyone within is drenched as all the rain comes into the classroom. On a sunny day its not possible to sit within the classroom as it gets too hot and on a cold day, the classroom are again not inhabitable due to excess cold,” said Sarita Dhakal, a ninth-grader at the Dandagaun Higher Secondary School. “We make a lot of efforts at home to attend classes at school. But due to lack of necessary things here, it’s not been fruitful.”

The school’s concrete buildings were destroyed by the earthquake. Since then it has been operating classes in makeshift tents, like many other schools in the district. “When the teachers are speaking, it’s impossible to hear their  voice due the noise coming from other classes,” she said adding that it’s a problem for all the students in the class, not only hers.

“The teachers complete the chapter but as we have not heard them we don’t understand even a bit of it. And without understanding it, it’s very hard to understand other related chapters. This is a serious problem and it’s been a nightmare for us.”

A group of students of the school in their classroom.

Apart from these, students are facing hardship for sitting in the classroom. They are very congested. Dhakal said that there are 41 students in her classroom which is too small to accommodate even half of that number. The congestion is so much that at times, the students feel suffocation in the room. “We cannot move or stretch ourselves while in the classroom. During the summer, we sweated a lot in the classroom. And with the winter coming, I think there is a lot of cold for us in store.” Prior to the earthquake, the school was regarded as one of the prosperous and renowned schools in the district.

Another infrastructure shortage at the school, besides classrooms, is the lack of science lab for conducting physics, chemistry and biology practical classes. Practical classes are important part of these subjects and in lack of laboratory classes the students are worried about their future.

“We have not been able to attend practical classes since the earthquake. I aspire to be a doctor and for that it is important for me to have good knowledge of science subjects. I am worried with the lack of laboratories at the school,” said Dhakal. The lack has directly affected the students’ performance she said, adding that many of her friends are worried about their poor performance in science and other subjects.

It’s not only Dhakal that has such concerns. Her classmate, Sharmila Tamang, is also equally worried. Tamang also says their studies have been greatly affected since the earthquake. Schools, which lost their buildings during the earthquake, have not been able build new ones. And in lack of infrastructure, academic classes are running for namesake, Tamang said.

“This is not just the problem of our school. Students of all schools we know around are going through these very difficulties,” she said. “When you don’t have proper classrooms and education materials, there is little a teacher can do to help you in studying.”

The status quo in rebuilding schools and academic institutions has further dashed off hopes of the students. They feel that the earthquake has destroyed their future beyond repair. “Earlier we had dreams for our future and we had confidence that we could materialize them. Education was good in school and so was the motivation from everyone,” she said. “After earthquake everything changed. Our schools have not been able to recover their past zeal to shape a better future for us.”

Concerns for future are even more acute among students of senior classes. “These are our senior years and our performance in the annual exams will determine our future. We are seriously worried of our future,” Tamang shared.

Rasuwa is one of the worst affected districts by the earthquake. There is hardly any school whose infrastructure is intact, let alone science labs. “The earthquake did not spare science laboratories of any schools around. Otherwise we could arrange students’ visit to them,” Ghimire said.

“Studies of the ninth and tenth graders have been seriously affected. If we are not able to put necessary resources together, we are concerned that studies of junior batches might also suffer, .”

German organization, GIZ Nepal, has taken the responsibility of rebuilding schools in Dandagaun area. Ghimire said that end to suffering of students in schools of Dandagaun is sure to prolong as the rebuilding process has not even begun. As per the data of District Education Office, 99 percent of schools in the district were fully destroyed by the earthquake.

The 24th day of April 2015 was just another Friday for Bishnu Tamang, a sixth grade student in Shree Nawalpur... Read More...