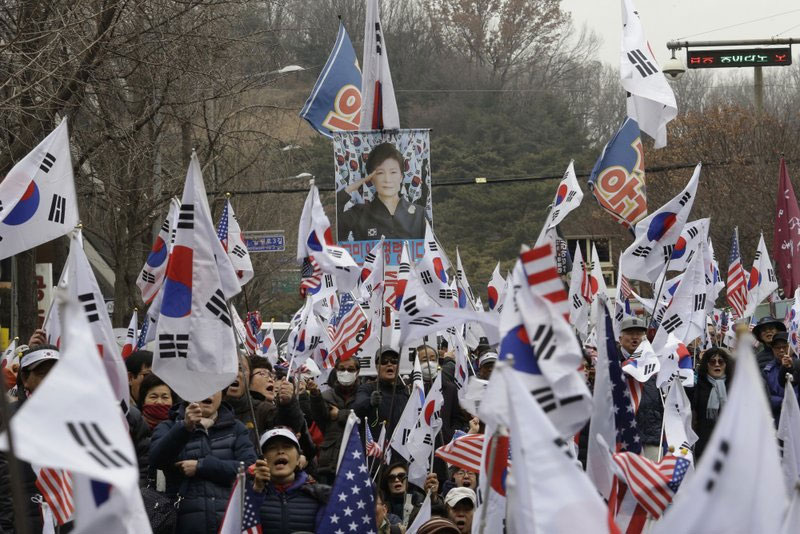 SEOUL, South Korea, Feb 27:  Prosecutors on Tuesday demanded a 30-year prison term for former South Korean President Park Geun-hye for alleged bribery, abuse of power and other crimes in a landmark corruption case that marked a stunning fall from grace for the country’s first female leader and conservative icon.

Park did not attend the court hearing where prosecutors also demanded a fine of 118.5 billion won ($110 million) and said she has shown no remorse for “disrupting constitutional order and damaging the public’s trust in state power.” The court was expected later Tuesday to set the date when it will announce the verdict and sentence if it finds her guilty.

“The defendant thoroughly destroyed the dreams and hope of people — this incident left a permanent scar in South Korean history and yet it also provided the opportunity for people to restore democracy and rule of law with their own hands,” prosecutor Han Dong-hoon told the court, according to a pool report. “A stern punishment by the court is needed to send a message to the public and politicians that the tragic history should not be repeated.”

If the court finds her guilty, Park would be the third South Korean president convicted of crimes. The others were former military generals involved in a 1979 coup and a 1980 civilian massacre.

Park has been boycotting the hearings in Seoul Central District Court since October in protest of its decision to extend her detention by another six months. Park’s lawyers then resigned en masse and she has reportedly been refusing to meet with state-appointed lawyers who have since been defending her in court.

On Tuesday, Park’s lawyers argued that the prosecutors have been unable to fully prove their charges against Park. They said it’s unclear whether the companies were pressured into providing money to foundations controlled by Park’s close confidante.

“The president did not threaten the companies and the companies weren’t victims who paid money because they were scared,” said lawyer Park Seung-gil, saying businesses will always try to maintain a friendly relationship with the government even when they aren’t chasing specific business favors. “To put it in a bad way, it could be described as a close relationship between government and business. But while it would be simple for everyone if we could define what happened as bribery or extortion or both, the whole body of truth isn’t clear-cut.”

If she is convicted, an appeal from her defense team is expected as Park has continuously denied wrongdoing.

The court could force Park to attend her sentencing hearing by taking steps such as issuing an arrest warrant or it could set a second sentencing date. Some legal experts say the court could issue a verdict without her presence in court.

Following massive protests by millions and impeachment by lawmakers in December 2016, Park was formally removed from office and arrested in March last year amid allegations that she colluded with a longtime friend to take tens of millions of dollars from companies in bribes and through extortion. The court sentenced Park’s friend, Choi Soon-sil, to 20 years in prison earlier this month, and more severe punishment was expected for Park.

Current South Korean President Moon Jae-in, who took office last May in a by-election, has said he won’t use his powers to pardon Park.

Former Cabinet ministers, senior presidential aides and business executives have been charged in the scandal. Lotte Group Chairman Shin Dong-bin was sentenced to 2 ½ years in prison for offering more than $6 million in payments to foundations controlled by Choi in exchange for business favors. Samsung scion Lee Jae-yong was initially sentenced to five years in prison for offering bribes, but some of his convictions were overturned on appeal and the sentence was suspended.

In jail, Park reportedly has seen only a few visitors and her lawyers. Before she began boycotting the hearings, Park sat mostly expressionless in court, sometimes burying her face into the desk apparently out of fatigue.

It’s hard to imagine a more absolute fall for Park, who won the 2012 presidential election by more than a million votes. She enjoyed overwhelming support from conservatives who remember her father, staunch anti-communist dictator Park Chung-hee, as a hero whose aggressive industrial policies lifted the nation from the devastation of the 1950-53 Korean War and rescued millions from poverty. Critics see the elder Park as a brutal dictator who tortured and executed dissidents.

As president, the younger Park was criticized for what opponents saw as her refusal to tolerate dissent and her alleged mishandling of a 2014 ferry disaster that killed more than 300 people, mostly schoolchildren. The scandal involving Choi further destroyed Park’s carefully crafted image as a selfless daughter of the nation and inspired an angry public to push for her ouster. After she was removed from office, voters elected the first liberal national government in a decade.

To stubborn supporters, Park remains the wronged “mother of the nation.” A declining number of Park supporters — still in the hundreds and mostly in their 50s, 60s and 70s — have been holding regular weekend rallies in Seoul, glumly waving South Korean and U.S. flags and shouting for her release.

Former presidents Chun Doo-hwan and Roh Tae-woo were convicted in 1996 for corruption and also on charges stemming from a 1979 coup and also a bloody suppression of pro-democracy protests that killed hundreds in the southern city of Gwangju in 1980. Both were freed on a special presidential amnesty in 1997.

BANEPA, July 17: After years of initiatives to start it, the country’s first and only IT Park in Banepa is finally... Read More...

Courts across the country to remain closed today
40 minutes ago

Indian capital to stay under weekend, overnight COVID curfew, with some allowances
1 hour ago