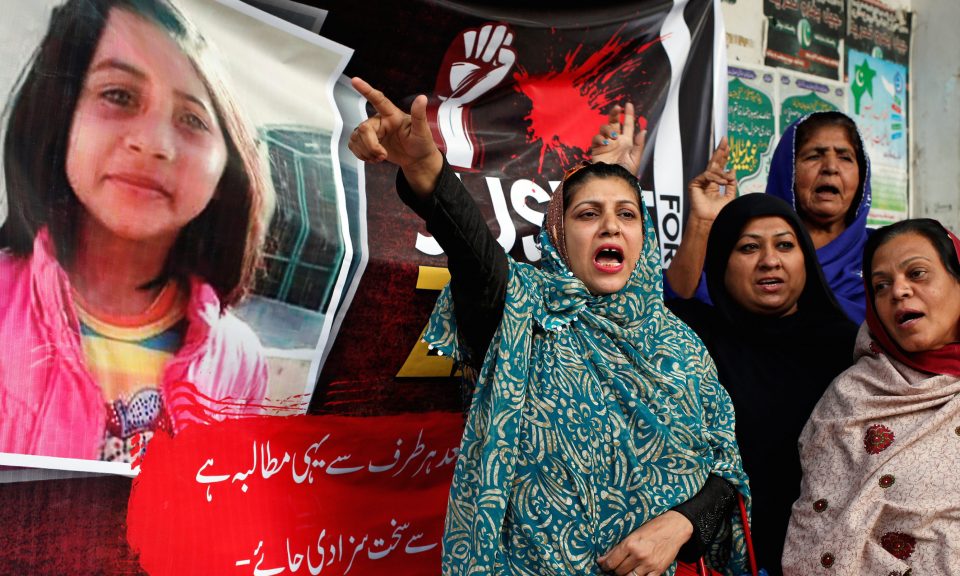 Pakistan was rocked by violent protests when the body of a six-year-old girl, Zainab, was recovered on Tuesday from a trash dump in the border city of Kasur, Punjab. The city remained paralyzed for over 50 hours, and protests were ignited elsewhere in the country as shock over the brutal murder spread.

Punjab’s police, denigrated by critics as a “politicized” force, panicked at first. It failed to control the enraged mobs, which swept through the city burning billboards depicting the state’s chief minister, damaging vehicles, ransacking the houses of ruling PML(N) parliamentarians and trying to set on fire the office of the Deputy Commissioner in Kasur. The police reacted with force and opened fire on the rampaging mobs, killing two people and injuring six others. Finally, the government had to call out the paramilitary Rangers to control the situation.

A postmortem examination conducted by the Medico-Legal Officer of District Headquarters Hospital, Kasur confirmed that Zainab wassexually assaulted before she was strangled to death. While the police are still clueless about the identity of the murderer, Punjab Chief Minister Shahbaz Sharif immediately formed a Joint Investigation Team (JIT) headed by Additional Inspector-General (AIG) Abubakar Khuda Bakhsh, who happens to be a member of the Ahmadiyya community. Sharif is the brother of ousted prime minister Nawaz Sharif, and the family still dominates Pakistan’s most important and influential state.

Meanwhile, the case took an unexpected turn when the victim’s father, Ameen Ansari, demanded that the Punjab government replace the JIT head. Instead, Ansari wanted another officer appointed because he did not trust a ‘Qadiyani’ (a derogatory reference to an Ahmadi) as head of the JIT.

With the complexities of religious identities becoming intertwined in the case, the Punjab government accepted the demand made by Zainab’s father. On Friday, it replaced the AIG, Abubakar Khuda Bakhsh, with Regional Police Officer Multan Muhammad Idrees as the new head of the JIT.

“I am now satisfied that the JIT will proceed in the right direction and will succeed in apprehending the killer,” Zainab’s father, Ansari, toldAsia Times, adding that the inclusion of members from the Inter-Services Intelligence and Intelligence Bureau will add to the credibility of the investigation team.

Although he deflected a question whether someone forced him to demand a replacement of the JIT head, his family links with the religious and political forces inimical to the Ahmadiyya community potentially explained why he opposed an Ahmadi officer to lead the investigation.

A dozen rapes have occurred in the vicinity of where Zainab’s body was found. This case appears to have ignited long-simmering anger. The city has witnessed brutal murders of children recently but none of the earlier cases triggered any protests. This time, the Pakistan army chief Qamar Javed Bajwa, and Chief Justice Mian Saqib Nisar have announced extra determination to apprehend the killer.

Only a day after Zainab’s body was discovered, another girl was raped and murdered in Punjab. The body of a 16-year-old was recoveredfrom a field in the Bhalwal sub-district of Sargodha district but the incident failed to cause any protests.

A senior police officer, speaking on the condition of anonymity, told Asia Times that the sense of outrage over Zainab’s murder was “politically motivated.” According to him, the previous child rape and murder cases in Kasur district happened to apolitical families. But Zainab’s relatives were active members of the Pakistan Awami Tehrik (PAT) and Tehreek-e-Labbaik Ya Rasool Allah party (TLY).

Both, the PAT and TLY are opposed to the PML (N) government. The PAT has mobilized opposition parties and announced a protest against the government. Earlier, the TLY had laid a siege to Pakistan’s capital, Islamabad for 152 days in November last year. It culminated in the resignation of the federal law minister, Zaid Hamid, under a military-led agreement which guaranteed the radicals a role in the nation’s statehood.

The sexual abuse of children is a growing problem in Pakistan. The criminal justice system is considered to be broken, having failed to prevent many crimes against children. According to recentstatistics, 4,139 children –  2,410 girls and 1,729 boys from five to 18 years old – have either been abducted, raped, gang-raped or sodomized in Pakistan in 2016.

According to the report ‘Cruel Numbers 2016‘ compiled by Sahil, a Non-Government Organization working on child sexual abuse, the figures show a 10% increase over 2015. On average, 11 children are attacked by pedophiles in Pakistan every day. The report recorded a new trend in child sexual abuse cases in 2016, which has never been reported before. It revealed that organized gangs with political links were active throughout the country making pornographic videos of children being sexually assaulted. Police have confiscated hundreds of porngraphic pictures and videos from these gangs.

It took Zainab’s brutal murder and sexual assault to spark a raging debate on the continuing violence against Pakistan’s children.

KATHMANDU, Dec 8: The civil society continued to protest against the government's inability to give justice to Nirmala Panta. Today,... Read More...