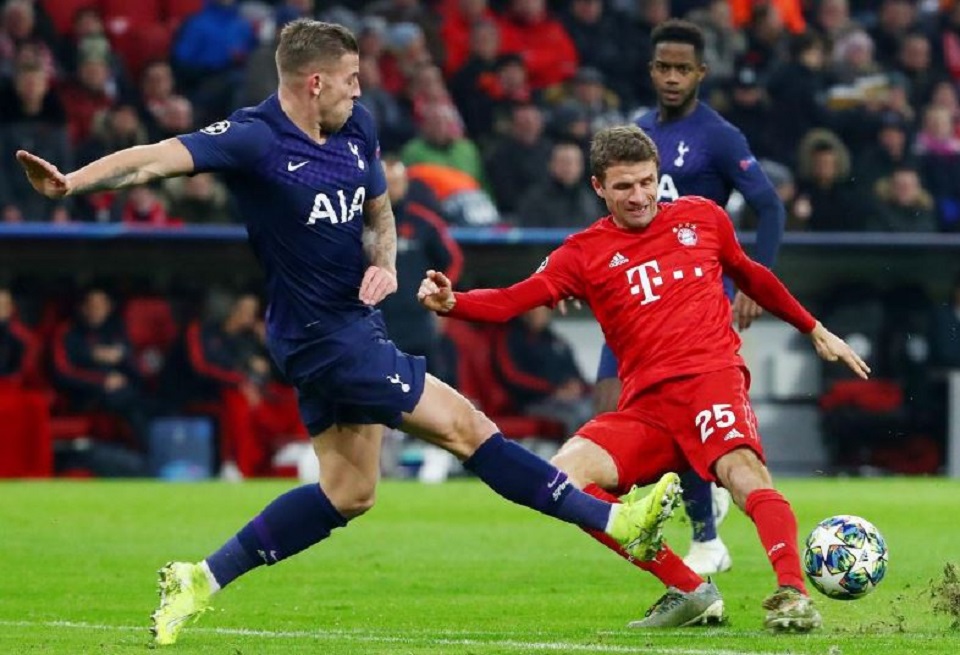 MUNICH, Dec 12: Bayern Munich made it a perfect six victories from six games in Champions League Group B as goals by Kingsley Coman, Thomas Mueller and Philippe Coutinho earned them a 3-1 home win over Tottenham Hotspur on Wednesday.

Five-time European champions Bayern had already qualified for the last 16 as group winners and with Tottenham also through as runners-up, there was little at stake, but the hosts turned on the style.

They became the first German team, and only the seventh in all, to win all six group games in the Champions League.

The first side to achieve the feat since Real Madrid in 2014, Bayern’s 24 goals was also only one shy of the group stage record set by Paris St Germain in 2017-18.

“I’m happy with the way we played,” Bayern boss Hansi Flick said. “We kept trying to break our opponents down, we created chances that we didn’t take, but still won 3-1, deservedly.”

The bright spot for Jose Mourinho’s much-changed Tottenham side was a goal for 19-year-old Ryan Sessegnon whose thumping 20th-minute equaliser on his first start in the competition made him the club’s youngest scorer in the Champions League.

While Tottenham rested Harry Kane, Bayern left Robert Lewandowski on the bench but the Bavarians looked potent in attack and it was no surprise when French forward Coman slotted them ahead in the 14th minute after good work by Serge Gnabry.

Sadly for Coman, his evening came to a premature end when his knee appeared to buckle shortly afterwards and he was helped off the pitch in clear pain.

“His injury obviously overshadows the win,” Flick said. “We don’t know how serious it is yet.”

Mueller, who replaced the stricken Coman, restored Bayern’s lead shortly before halftime, stabbing in from close range after Alphonso Davies’s shot had rebounded across goal off the post.

Bayern, who put seven past Tottenham on matchday two, packed too much firepower for the Premier League side again.

Coutinho, who hit the bar in the first half with a thunderbolt, punished Spurs’ defence for backing off by bending a low shot inside the post after 64 minutes.

The Bundesliga side would have scored more but for Spurs keeper Paulo Gazzaniga although their defence occasionally looked vulnerable, especially when Tottenham substitute Son Heung-min twice burst through late on.

“We didn’t want a result that leaves a shadow on us,” Mourinho, who suffered his second defeat in his sixth game in charge of Spurs, said. “I think there were positive things about many of the boys. There was some important information.”

With Bayern finishing on a maximum 18 points and Spurs second with 10, Greek club Olympiakos secured third spot in the group and a place in the Europa League as they beat Red Star Belgrade 1-0 to move on to four points.

In the name of Development Aid
23 hours ago

Youth attacked with Khukuri outside High Court
15 hours ago

Taliban hang body in public; signal return to past tactics
17 hours ago