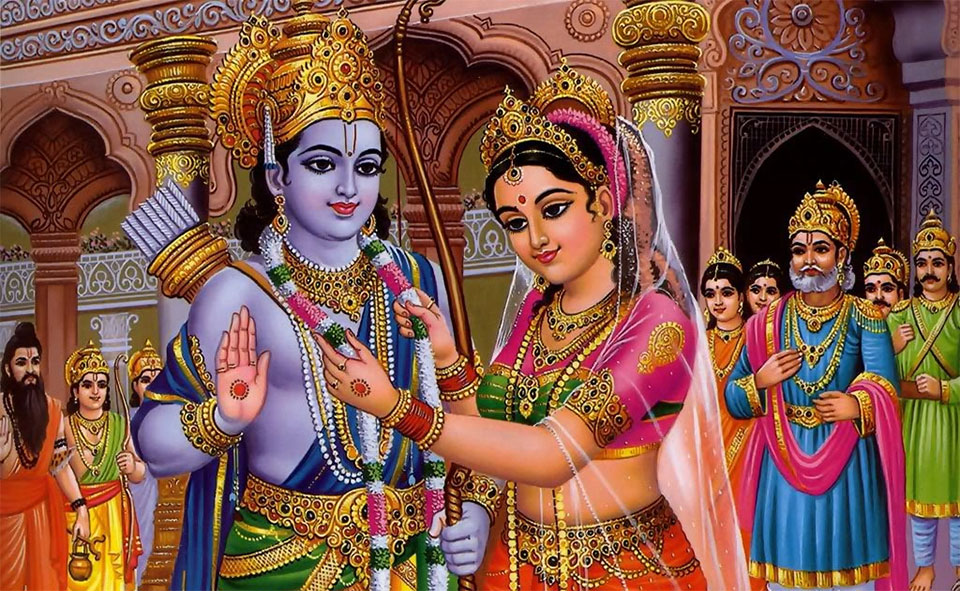 JANAKPURDHAM, Dec 11: Janakpurdham, the city in the historic Mithilanchal region, is all geared up for the celebrations of the Sitaram Vivah Mahotsav, the festival that is observed honouring the wedding of Hindu god Ram and goddess Sita.

The people of Mithila observe the festival commemorating the Day when Sita, daughter of the then Mithila King Janak was married off to Ram, the crown prince from Ayodhya, India. Devotees from Nepal, India and other countries arrive here to attend the festival. The festival also known as the 'Vivah Panchami' falls on the fifth day of the Shukla Paksha (the period of bright moon) in the month of Margasirsha (November-December) in the lunar calendar.

The main celebrations are taking place in the famous Janaki Temple on Wednesday whereas the wedding rituals have begun a week ago in advance.

According to temple assistant priest, Mahantha Ram Roshan Das, this time Chief Minister of Uttar Pradesh of India, Yogi Adityanath, will be arriving to witness the grand celebrations. A sea of people is already in the town to observe the festival.

The Chief Minister is scheduled to land in Janakpurdham from Lucknow, India Wednesday morning on a special aircraft and perform puja at the temple. Later, he will participate in the engagement ceremony to be held at Barhabigha. The province 2 government will be hosting a reception in his honour. He will fly back to Lucknow same evening.

Nepal Army's helicopter will shower flower petals for the engagement ceremony. Meanwhile, a wedding procession from Ayodhya is already in the town. The members of the marriage party representing the bridegroom’s side arrived here riding on camels, horses and elephants.

The wedding between Ram and Sita was held after the Shiva Dhanush (the symbolic bow of Lord Shiva) broke into three pieces in course of the attempt by the crown prince from Ayodhya to lift it up. Janak, the Mitihila King of Tetra Yuga who was taken a great surprise by knowing that his daughter could easily lift up the bow of a great weight announced that he would give the hand of his daughter to a man who was able to lift the bow and competent.

The wedding was organized at the Bahrabigha ground of Janakpurdham in accordance with the Ramayana epic written by Goswami Tulasidasa. The people of Mithila, who consider Sita as their daughter or a sister, make their presence throughout the wedding rituals. It is also believed that various gods and goddesses are present there unseen.

Besides Hindus, people following Buddhism, Sikhism, Christianity and other faiths also participate in this festival.

The Ram-Sita wedding ceremony comprises various rituals like Tilakotsav, Matkor, Swoyambar and the Bibaha (the wedding proper) as per the Mithila culture. In accordance with the provisions mentioned in the ancient scriptures, a lavishly decorated idol of lord Ram mounted on a throne is carried in a palanquin from the Ram Temple to the Bahrabigha ground, accompanied by a procession. Similarly, the idol of Sita is carried in a specially decorated palanquin from the Janaki Temple to the Bahrabigha ground.

With the conclusion of the rituals of Swoyambar, Parikshan (the groom’s test) and the wedding at the Bahrabigha, the idols of Sita and Ram are brought to the Janaki Temple where the ritual of tying the knot or marriage is performed in keeping with the Mithila tradition. Devotees and visitors from various places on the country as well as the bordering places of India partake in the procession carrying the palanquin.

The wedding ceremony is lively and colourful accompanied by jest and frolicking between the bride’s side and the bridegroom’s side that takes place at the Bahrabigha ground, the symbolic tableaus that are brought to the ground from different villages and the thousands of devotees.

Mithila folks consider themselves to be honoured by and take pride in this symbolic wedding between goddess Sita and god Ram, incorporating the Fulbari context to the Swoyambar ritual.

On the day of the Mahotsav, the devotees take holy bath in the early morning in the ponds, offer worship and make resolutions. Singing of hymns, staging of the drama depicting the life of Ram and Sita, organization of

Women and her two children found hanging from ceiling fan

JANAKPURDHAM, Nov 28: A woman and her two children have been found dead inside their home at Barthawa Municipality-1 in... Read More...

India to provide Rs 1 billion for the development of Janakpurdham

Special arrangement for Dashain in Janakpurdham

JANAKPUR, Oct 6: With the renovation of the ancient Rajdevi temple of Janakpur just completed, special arrangement has been made here... Read More...