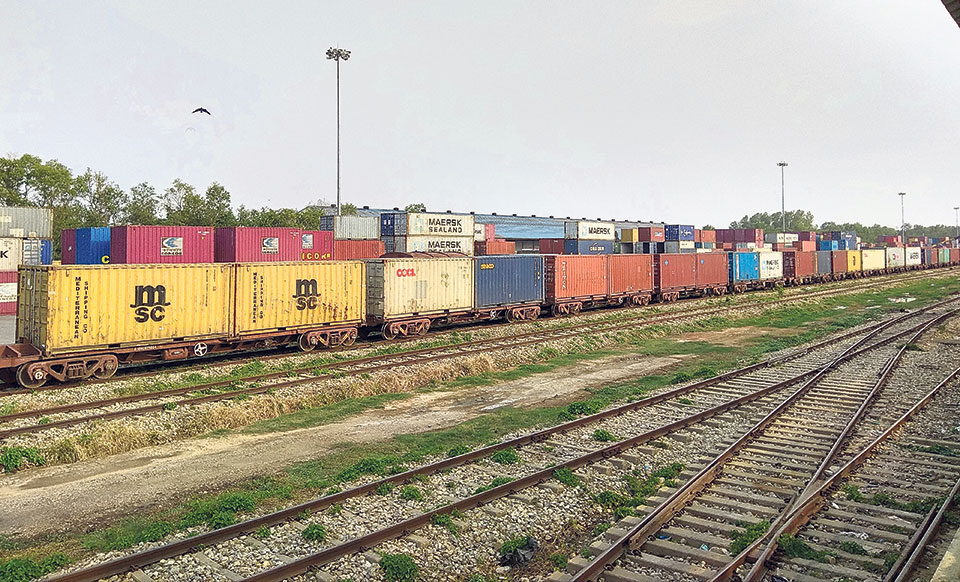 BIRGUNJ, May 19: Sirsiya dry port located in Birgunj is struggling to handle the increasing import of fertilizer, livestock feed, maize, beans, raw materials for iron products and container cargo from third countries. During its establishment in Fiscal Year 2004/2005, a total of 55 racks of goods had arrived at the dry port. Over the years, the import quantity has increased. In FY2017/18, the number of racks coming to the port has already reached 914, and it is expected to cross 1,000 by the end of the fiscal year.

“Analyzing the increasing transaction, we can assume that 100 racks will enter the port per month from the next fiscal year. As the port is struggling to handle imports now, we are more concerned about the future,” said Ashok Temani, executive member of Federation of Nepalese Chamber of Commerce and Industry (FNCCI). Currently, around 100 racks of clinker are unloaded at Muzaffarpur of India, 50 racks of goods are being unloaded at Raxaul of India, which will be transported to the dry port. There are more cargo containers that are coming here through the roadway, diverted by the Indian railway.

Nepal has to accommodate about 150 racks per month but there is nowhere to keep them at the dry port, Temani added. “Problems are raising but no one has the exact solution for it. We don’t have the infrastructure too,” Temani told Republica. Railway is preferred over roadway for more secure, faster and cheaper imports.

“Indeed the size of import is increasing and we are serving the importers taking a risk,” said Bishnu Kanta Chaudhary, CEO of Himalayan Terminals. Chaudhary further said that the Himalayan terminals are not the one to expand the infrastructures. “We are just a manager of the dry port. Nepal government and concerned authorities have to sort out the problem,” Chaudhary added.

On the other hand, Temani said that policymakers are indifferent toward the problems of trade and transportation. According to him, to handle the increasing imports, the dry port needs to get renovated, new Inland Container Depot (ICD) should be added, and a separate railway yard should be constructed for the dusty cargo.

Importers have also complained that the lack of space has troubled them to import goods. “If we rely only on the dry port for importing raw materials, our industries will find it difficult to run even for a week. Indeed we are facing the lack of space at the dry port,” said Anurag Sharma, director of Jagadamba Steels.

In the previous fiscal year, around 72,000 containers entered Nepal, among which more than half were imported via the Sirsiya dry port. And this year, the number has been expected to cross 72,000. Similarly, demand for import of construction raw materials is high.

Cement production increasing, and so is clinker imports

KATHMANDU, Sept 28: Though the government has set a target of becoming self-sufficient in cement and its raw materials, the import... Read More...

Foreign envoys and diplomats taking part in ‘hiking’
8 hours ago

Make arrangements for students who returned from China due to COVID-19 to go back: Parliamentary committee
12 hours ago