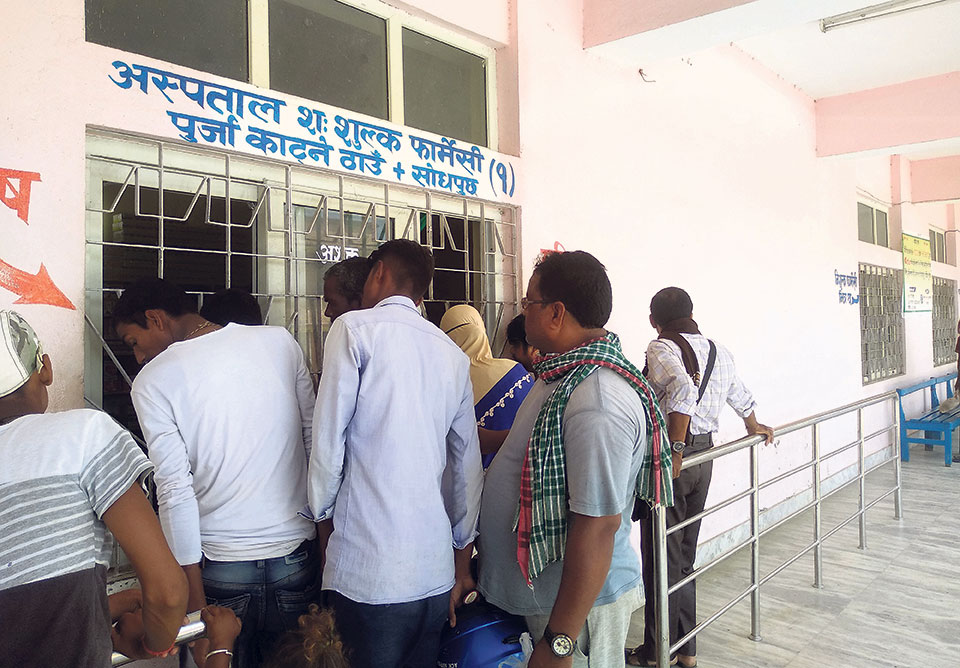 Visitors line up at the Siraha District Hospital pharmacy in this recent picture. Photo: Mithilesh Yadav/Republica

SIRAHA, April 21: Rinku Kumari Yadav of Siraha Bazar had a little money in her pocket when she went to the district hospital for her pregnancy check up last week. She was straight away told to have a video x-ray, blood culture, urine and stool tests done. This cost her a lot. After that, she was handed a long list of medicines. She thought that buying the medication would not be expensive as the government provides 70 kinds of essential drugs for free. More so, for a pregnant woman.

“I had heard they provide vitamin and calcium capsules for free. Along with that, there are many other medicines that the government offers for free,” she said. However, she did not get anything for free. The pharmacy inside the hospital told her she had to buy the medicines as the free medicines were out of stock.  “Then I had to buy all those medicines from private pharmacies.”

Though she thought she might be able to pay for the checkup and medicines with around a thousand or two, she had to spend over Rs 10.000 for the tests only. Medicines incurred almost half the amount.

“I am anxious about the expenses for my regular pregnancy check. Considering the cost, it does not feel like I am doing my check-up at a government hospital. Overall costs of the checkup are way costlier than even in private clinics,” she lamented.

Due to rampant early marriage in the region, early motherhood has remained pervasive here. It is considered one of the significant factors affecting women’s health. Amid this scenario, if government hospitals are not able to provide efficient services to such women, they are hit even harder.

Due to the shortage of free medicines at the government hospitals, patients have to struggle to buy those medicines from private pharmacies. “On one hand, they don’t keep all kinds of medicines in the hospital’s store and on the other hand they don’t like to provide even the medicines they have,” Yadav accused.

Storekeeper at the Siraha District Hospital, Umesh Gaud, where Yadav had visited for a checkup, refuted the accusations that the hospital does not provide medicines even though they have the stock.  “We never turn away patients for free medicines if we have them in stock. But what can we do when there are no medicines with us? We don’t have stock of many medicines at the hospital for a long time now,” he said.

Because the district hospital does not have even essential medical equipment and accessories, patients are made to pay for everything, he stated. “As we don’t have stock, we have to ask the patients to pay for everything including cotton, saline water or bandages. We cannot afford to pay for those materials from our pockets,” he said. He further maintained that the hospital does not have even condoms and other family planning kits.

Medical Superintendent of the hospital, Dr Nagendra Yadav, also shared the same situation. He blamed the municipality office for not availing medicines and necessary tools and kits to the hospital and of depriving patients of primary health care facilities. “After the restructuring of the country, the responsibility to manage health care services has come under the authority of the municipal office. But our municipality has not taken any initiatives towards fulfilling its duty in this regard. It hasn’t released a budget till now for purchasing medicines also,” he said.

Visitors are however not ready to buy this argument. Many of the doctors and even staffs of the hospital operate personal pharmacies, polyclinics and clinics outside the hospital, they say. For instance, Sunil Kushuhawa, a doctor at the hospital runs a private polyclinic at the hospital. Patients are referred to this polyclinic for various tests. According to a patient, Sita Devi Yadav, most of the clinics around the hospital belong to the hospital doctors only. Some staff try to make feel that the government hospital is useless, she accused. “They try to lure us to their private clinics. If they give good service at the government hospital, they won’t be able to earn at their clinics. It’s all a business strategy,” she said.