Sikta canal damaged at over 100 places 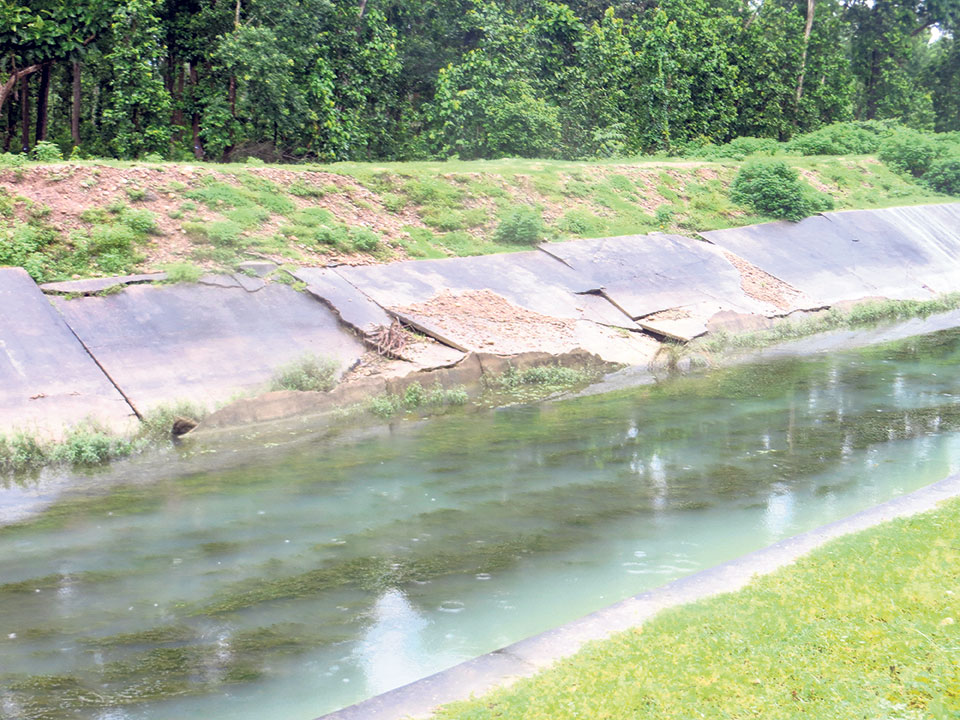 A portion of the damaged canal of Sikta Irrigation Project. Photo: Republica

BANKE, Aug 12: The major canal of the Sikta Irrigation Project is badly damaged in more than 100 places along its 45-kilometer total length. The sections built in the first and second phases are not in a condition to be used any longer.

Several holes can be seen in some places along the canal while in several other places the slabs have been dislocated.

The canal is in a vulnerable state at various points. The water was seen leaking at different places. There is some problem or other with most sections of the canal. The water flow is smooth only at a few points. There are also 30 to 40 meter-long cracks at places.

The stretch from Agaiya to Dhakeri is so badly damaged that it can no longer be used. This 35-kilometer section lies in Raptisonari Rural Municipality. Dhani Kumari Khatri, deputy chair of the rural municipality, said that most portions of the major canal had collapsed immediately after the completion of the construction work.

“We had raised our voice against the sub-standard construction in the initial stages of the work,” said Khatri. “But they ignored us. Now it has become a big problem.” According to her, at least 24 kilometers of the canal is vulnerable.

A 42-kilometer section of the national pride project was built by CTCE Kalika Construction. The section that collapsed even before supplying water to the fields was built by the same contractor. The section built in the third phase (36 to 45 km point) is comparatively better. Locals said this section lies in the market area that can be constantly observed by the public.

They accuse the contractor of using sub-standard construction materials in the most-damaged section from the 0 to 35-km point, as this section falls within the National Park and Chure range areas.

Shova Oli of Mahadevpuri in Raptisonari Rural Municipality believes one reason behind sub-standard work was sub-contracting by the major contractor to unskilled local contractors at a minimum price.

“Those who bagged the sub-contracts further sub-contracted the work to other locals for a commission,” he said.

Locals accuse the engineers and consultants responsible for monitoring and inspection of doing nothing even when the contractors were openly using sub-standard materials.

Ramdas Tharu of Raptisonari-2 said the quality of the work was compromised as the contractors were working in collusion with project officials.

The canal collapsed on June 28, 2016 during a trial run and again on July 23 this year in a similar trial.

The locals feel threatened by the canal. Ward Chair of Raptisonari-8 Khum Bahadur Basnet said at least 12,000 locals were at risk due to the sub-standard construction. The locals of Mahadevpuri, Shamsergunj, Dhakeri, Kachanapur, Tikulipur and other areas are at risk, he said.

CTCE Kalika built the major canal section between 2009 and 2015. It has refused to rebuild the damaged section, arguing that it wasn’t responsible for repairs a year after the completion of construction.

Locals of the municipality are happy that the Ministry of Energy, Water Resources and Irrigation is forming a probe committee and the Commission for Investigation of Abuse of Authority (CIAA) is also initiating investigations on its own.

They stressed that there should be no compromise in the investigations.

Former minister Bhandari demanded that officials doing the investigation must inspect the damaged sites and talk to the locals before reaching any conclusion.