Shrouded in obscurity: The living gods of Nepal 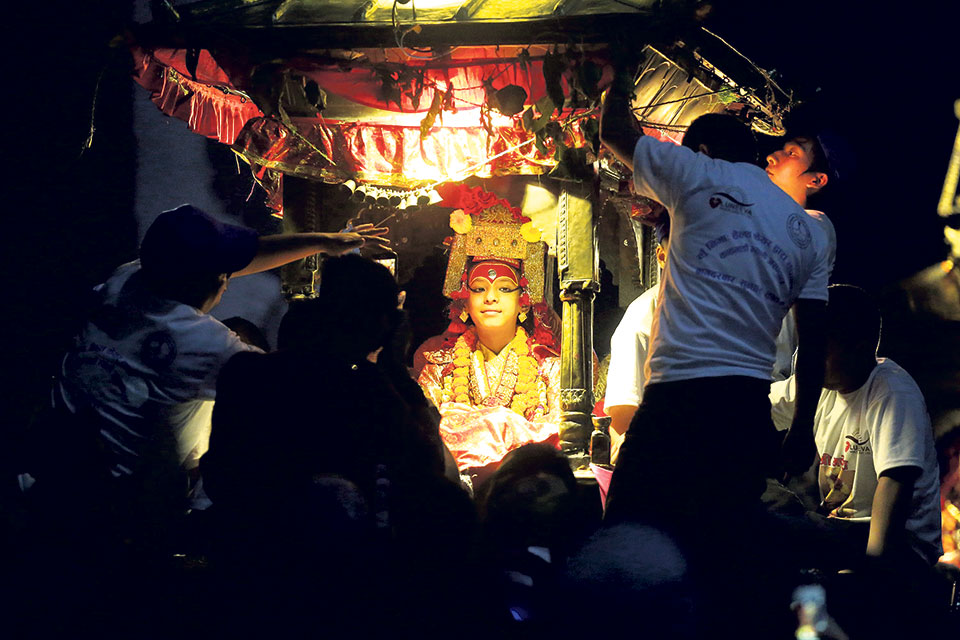 We have all heard of the Kumaris of Nepal. In fact, it might even be safe to say that the world knows of them – many books and documentaries have been made on them. They are the living embodiment of the Goddess Taleju and an integral part of the Nepali culture.

Every year, during festivals such as the Indra Jatra, thousands of people flock to the streets of Basantapur in Kathmandu as a massive chariot is hauled, along with a long procession trailing behind, only for a glimpse of the revered Goddess. She is enthroned in a magnanimously decorated chariot, illumined in the late hours of the evening, and lauded with cheers of worship.

However, leading these processions are the chariots of two living deities whose existence, save for the cultural devout, few realize. Clad in identical clothing to that of the Kumari, with the same stylized kohl drawn across their faces are Lord Bhairava and Lord Ganesha.

The reigning Bhairava (manifestation of Lord Shiva) is 12-year-old Rojan Shakya while the reigning Ganesha is Sambeg Shakya, also 12 years of age. Both have held their positions from the time they were infants. Yet for someone who has forsaken all possibilities of a normal childhood in acceptance of their godliness, their existence is perhaps grossly overlooked.

The head priest of Taleju Temple for 23 years, Uddhav Karmacharya, explains that it is because the Newari community and the Nepali government have only ever given Kumari her share of due. Let alone their share of reverence, Lord Bhairava and Lord Ganesha aren’t even allotted quarters of their own despite several appeals to allow them quarters in conjunction to those of the Kumari in the Kumari Ghar. It was only very recently that they were given a monthly allowance in recognition of their status.

“No one is serious about this and I personally think it’s a great pity. They are the living manifestations of our Gods and none outdoes the other in importance,” says Karmacharya.

The caretakers of the lords have, for a very long time, expressed their concerns on the matter. In the eyes of believers, their lack of quarters in the vicinity of the Kumari Ghar and the mediocrity with which they are forced to live hampers the purity of their divinity and lessens their importance.

The norm of selecting the living gods, Bhairava and Ganesha is singular only to Kathmandu. While Patan and Bhaktapur have Kumaris of their own, they have no Bhairavas and Ganeshas. This custom took roots during the rule of King Jaya Prakash Malla. At the time, the Kumari was already an integral part of the culture. During the processions of Indra Jatra, however, the idea of worshipping the other gods along with Kumari gained popularity.

Bhairava, the god of strength and the destroyer, bears great importance in the Newari community. Similarly, Lord Ganesha has forever been the god of beginnings (think Shree Ganesh). The two were thus included in the processions. Since then the chariot for Lord Ganesha has headed the parade during Indra Jatra followed by Lord Bhairava and finally Kumari. Together, the three form the holy trinity of the Newari community.

The process of selecting the Bhairava and Ganesha is similar to that of the Kumari. They must belong to the Shakya clan and reside within the 18 bihars of the Newari dwellings (extending from Lagan to Ason in Kathmandu). Any deformities or anomalies in the child can lead to abrupt disqualification. The idea is to discover a child innocent in his bearings in whom the lords may reside.
Children fulfilling all the criteria are then appointed the lords after a series of rituals and processes. They abide by the same protocol as the Kumari and don similar clothing (granted a little modest in appearances). But while the Kumari is limited within the confines of her palace, Bhairava and Ganesha aren’t.

Bhairava and Ganesha both reside in their own homes. On regular days, they are young boys with aspirations of becoming engineers and athletes. Their divinity is only attested by their elaborate kohl makeups and their long hairs gathered in a tight bun. They play and live as any boy their age would. They assume their roles as living gods only during certain festivities.

They are the living gods but ones who live in the crowd. They are given the liberties to attend school, run about the grounds with friends and aren’t mandated by strict codes of conduct as the Kumari is. They answer to their call of duty a few times a year and, for the rest, they live comparatively normal lives.

But this laxity isn’t because they are any less important, assures Karmacharya. “They just haven’t had the same privileges as Kumari. The head of state visits the Kumari once a year to receive blessings but she does nothing of the sort with Lord Bhairava or Ganesha,” he adds further elaborating that even visitors and cultural enthusiasts only ever come looking for Kumari.

However, the causes for lack of acclaim for the deities have varying perspectives. Mohan Ratna Shakya, a Kathmandu local, explains that the Newari culture at large has always been matriarchal in its leanings.

“Female deities have always been more revered and recognized in the Newari community,” he says adding that every holy Newari temple has a female deity as a counterpart to the male deities. The evidence lies in the preferential treatment of Mata Harati to that of Lord Swayambhunath, despite the latter being the chief deity of the historical monument. Perhaps this preference of female deities explains the disparity between the Kumari and the Bhairava and the Ganesha.

Karmacharya counters that it isn’t so. Religiously neither deity outranks the other or is holier than the other. “The claim of females bearing more importance in our culture is baseless. Females have divinity but so do males. And both have to be acknowledged. Kumari getting more love is just how it evolved,” he says. The society did it, he maintains.

Most families of the Shakya clan these days hesitate to enroll their sons as possible candidates for the position of Bhairava or Ganesha. The reason is simple – despite equal status in importance, the Bhairava and the Ganesha are overlooked. Their holiness and importance are acknowledged only during the eight days of the Indra Jatra and that too only by enthusiasts.

It is no secret that the masses favor the Kumari. This is evident by massive cheers during her entry in a chariot of grand designs. While the Bhairava and the Ganesha are paraded in palanquins or smaller chariots, they are less in grandeur to that of the Kumari’s.

But perhaps the discussion that the Lord Bhairava and Lord Ganesha should be revered just as much as the Kumari is a futile one. The culture of living gods as a whole is one that is dwindling, says Purna Sundar Dhoubhadel. “We lived in bihars previously but with settlement moving away from the main original squares, there are few people involved in the processes now,” he says adding that the danger may not be imminent as of now but it is a possibility.

Religiously, Kumari is the royal goddess. But Bhairava and Ganesha are the protectors from the many evils. They may not be hailed but their presence is one of silent strength and a representation of a culture extraordinary in its richness and depth. Granting them their much-deserved honor is importance but cultural experts believe it’s a lost cause.