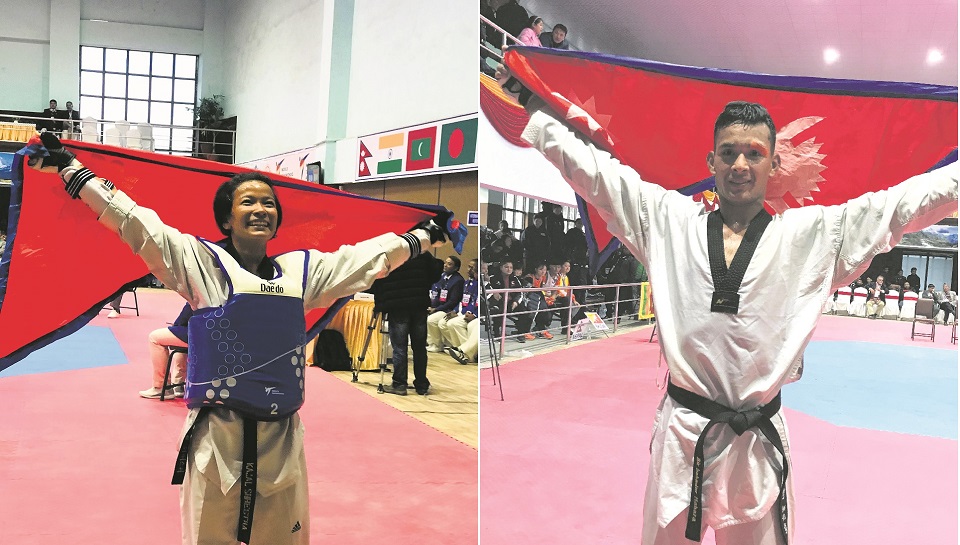 In 43 kg category, Shrestha carved an underdog story, defeating Pakistan’s Saida Jaidi Sidra who was physically superior than the winner.

Shrestha fought fatigue after a struggling win of 50 against 39 in the semifinal against India’s Radha Bhati. The loser of the semi, Bhati, shared the bronze with Sri Lanka’s Isara Samarakoon.

At the end of the first round, Shrestha had taken a lead of 14-9 against Jaidi. This was the moment when home crowd went behind her. Eventually, Shrestha defeated Jaidi in a dominating score of 50-14 to claim the gold.

Despite the difference in score, Shrestha acknowledged that Jaidi was a strong opponent as anyone else in the final match.

“She was strong and tall. I kept blocking all the kicks on my face. I had to take all my chances,” said Shrestha after the match.

Mahara, who was injured during his semifinal bout against India’s Prithvi Raj Chauhan, defeated the title contender in the semi with a score of 32-24.

After losing the first round against Fahim, Mahara comeback to win second round 15-13 and eventually the match to give Nepal another gold in taekwondo.

Another gold for Nepal, Bir Bahadur Mahara wins in Taekwondo

KATHMANDU, Dec 3: Nepal's Kajal Shrestha has clinched a gold medal in the Women's Taekwondo under 46kg category at the... Read More...

SAG date to be finalized Saturday

Is Nepal's coronavirus different from the rest? A study will unravel the mystery of the virus structure at the genetic level
7 hours ago