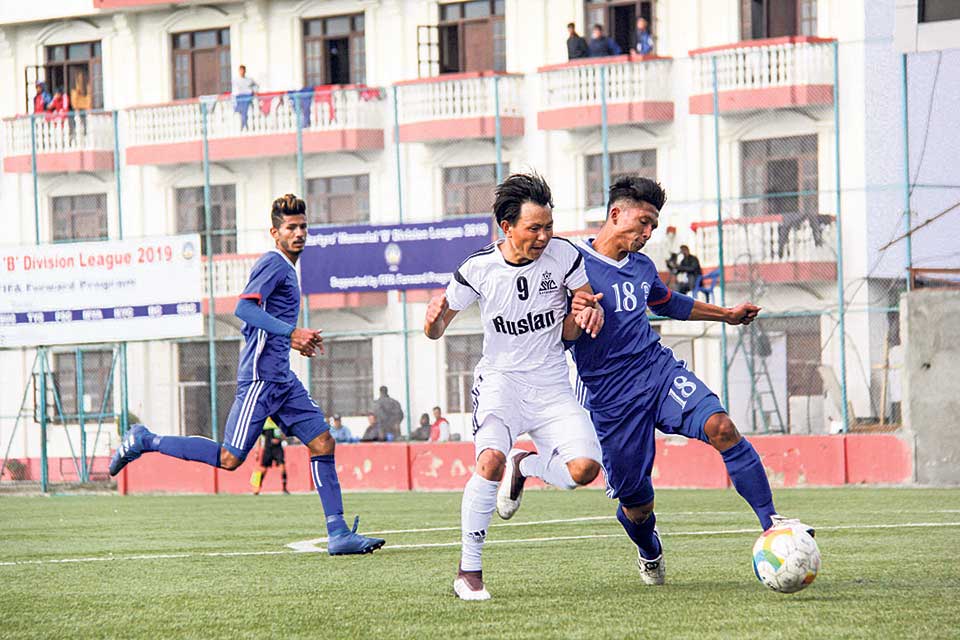 Players of Ranipokhari Corner Team (RCT) and Satdobato Youth Club in action during a football match of the Martyr’s Memorial ‘B’ Division League at the ANFA Complex in Satdobato, Lalitpur on Sunday. Photo Courtesy: ANFA

With the win, Shree Bhagwati is at the top and RCT is second, while Satdobato and Tusal are out of the contention to win the title as both of them are yet to register a single point with a game in hand each.

At the All Nepal Football Association (ANFA) Complex in Satdobato, two goals each from Darshan Gurung and a strike from Tshering Pasang Sherpa sealed the win for Shree Bhagwati, while Kasim Rai pulled one back for Tusal.

Despite holding Shree Bhagwati to a 1-1 score, Tusal could not control the game and conceded two goals in the second.

Gurung gave Shree Bhagwati the lead in the 41st minute, while Rai equalized in the first half injury time. Gurung completed the brace in the 60th minute, while Sherpa sealed the win for the team in the 81st minute.

In the other match played on the same day, RCT’s Sansar Nanda Palanchoke scored a brace to defeat Satdobato.

Satdobato held RCT in a goalless draw in the first half.

Palanchoke gave RCT the lead in the 68th minute, while he doubled his tally scoring in the 83rd minute.

Shree Bhagwati and RCT have six points respectively, while both have a +3 goal difference. They will take on each other on the last fixtures of the round on Tuesday to declare a winner.

Tusal and Satdobato both are winless, while both have -3 goal difference. They will face each other in a bid to win their first game.