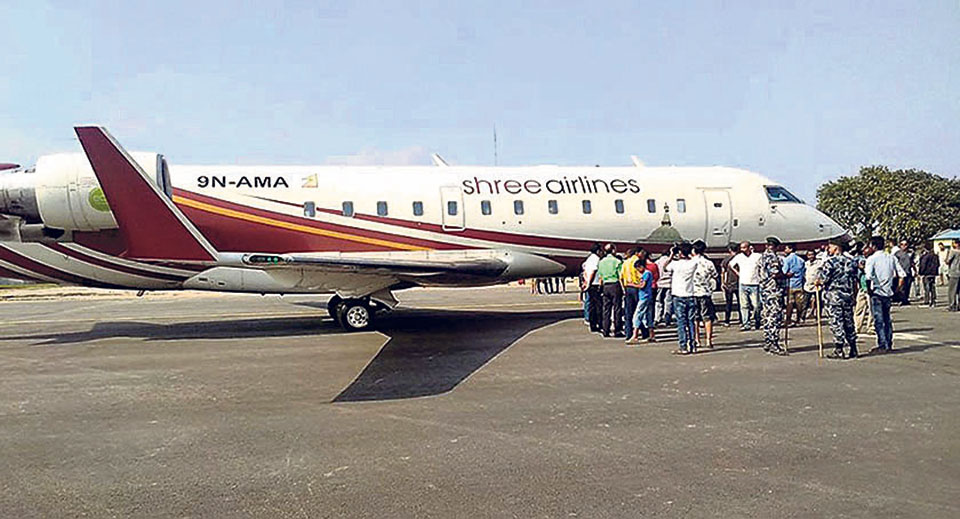 KATHMANDU, June 16: Private sector airline operator, Shree Airlines, is all set to begin its air service on the Kathmandu-Rajbiraj route from June 24. The 25-minute flight will cost minimum Rs 4,000 per person.

After a successful test flight on May 24, the company came up with the plan of operating commercial flights on the sector.

The company said it would run only five flights a week for now, as it is just a beginning phase of air service in the Rajbiraj airport.

According to Anil Manandhar, corporate manager of Shree Airlines, the flights will run only on Sunday, Monday, Wednesday, Thursday and Friday. “We could find hardly any passenger for Tuesday and Saturday from Rajbiraj, so we are operating only five flights a week in the beginning,” Shrestha told Republica. “We took forward this initiation in order to extend air service for the comfort of the public,” Shrestha added.

The opening of the Kathmandu-Rajbiraj route is expected to serve the people of several eastern districts including Udayapur, Siraha, Saptari, Janakpur and Biratnagar.

Shrestha further said that people who are willing to go to Janakpur and Biratnagar from Udayapur, Siraha or Saptari can take this route. “If we get a positive response from the public, then surely we can add more flights. But for now, we will be operating only one flight a day,” he added.

However, although the airline company has only nine days left to begin its service, the infrastructure at Rajbiraj airport is yet to be readied for the flights to operate. The company has already opened ticket booking for this route.

Rajbiraj airport has started operation from February 20, 1960. But it could not come into commercial operation. A decade ago Tara Air had started flight operation however it could not go longer than a month. After that, Shree Airlines successfully conducted its test flight on May 24 in the presence of Minister for Culture, Tourism and Civil Aviation, Rabindra Adhikari. Reopening the Rajbiraj airport is one of the actions included at the 100-day action plan of the minister.

DHANGADHI, Aug 12: The duration of air travel from Dhangadhi to Kathmandu, the longest among the domestic routes, has come... Read More...

POKHARA, Nov 9: Chinese airlines, which had stopped their flights to Kathmandu due to earthquake and blockade, have resumed their services. Read More...