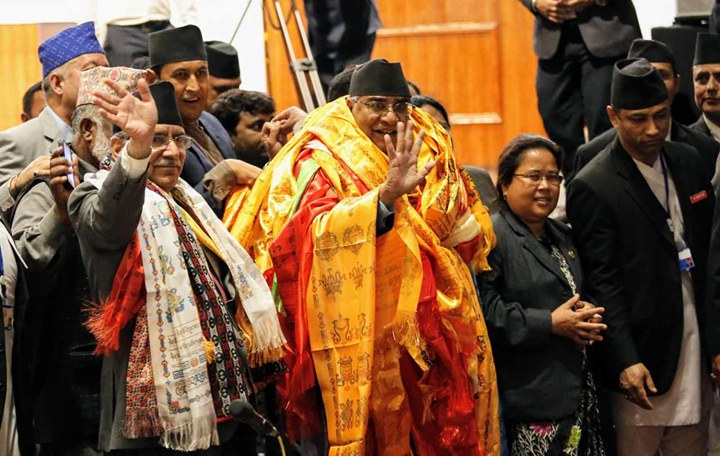 Lone candidate for the post of Prime Minister, Deuba secured 388 votes out of 593 votes in the parliament. A total of 170 lawmakers voted against him.

A total of 297 votes are required to elect the new prime minister.

Speaker Onsari Gharti floated Deuba’s candidacy in the parliament to elect him as the new prime minister of Nepal in line with the Article No 298 (3) of the Constitution and the Parliament Regulations 2073's chapter-9.

The election for the new PM had begun after the Prime Minister Pushpa Kamal Dahal resigned from the post on May 24. With the approval of the PM'S resignation, President had called political parties to form consensus government providing seven days for the same.

President Bhandari had called the parties to elect the PM on the majority basis after parties failed to forge consensus within the given deadline.

He is the president of the Nepali Congress elected with more than 60% votes in NC convention held in 2016.

Deuba, originally from Asigram - 3, Dadeldhura, had become the Parliamentary Leader of Nepali Congress in 1994 following street protests against the UML government led by Man Mohan Adhikari.

In the election held to select the Parliamentary Leader for Nepali Congress following the resignation of G. P. Koirala, in 2001, he had defeated Sushil Koirala by a huge margin.

Deuba is married to Dr. Arzu Rana Deuba and has a son, Jaiveer Singh Deuba.

KATHMANDU, Feb 15: KP Sharma Oli, chairperson of CPN-UML and a common candidate of the Left Alliance has been appointed... Read More...