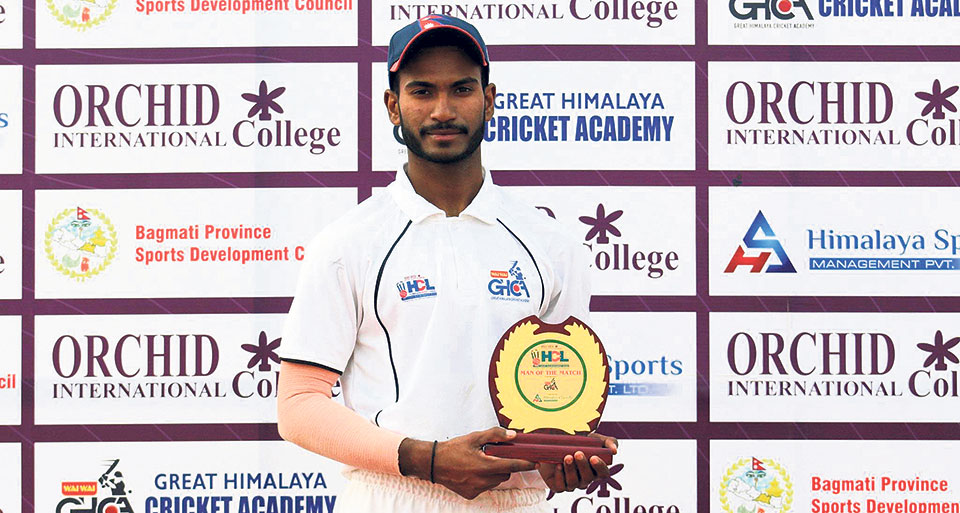 In the second day match played at the Mulpani Crikcet Ground, Sheikh added 41 runs off 49 balls to his first day total of 100 runs to seal the win for GHCA with the game closed at 61/3. He scored eight fours on the second day to help GHCA register a win.

HCA opener Deepak Bohora scored the highest 53 runs off 103 balls in the game consisting of six fours, while he was supported by Rajat Timalsina, who added 37 runs off 73 balls with four boundaries.

Likewise, Birat Bhandari made 31 runs off 53 balls with five fours, while Gajendra Bohora scored 22 off 46 balls including two fours. Also, Pratish GC added 21 runs off 30 balls which included two fours and a six, while Deepak Bohora and not out Sandeep Shahi hit 14 runs each.

Bhupi Singh Kunwar hit 13 runs off 50 balls with a four and a six, while Amrit Thapa contributed 11 runs off 12 balls which included two fours.

The other batsmen failed to reach the double figures.

GHCA’s Rashid Khan was the pick of the bowlers as he pocketed five wickets giving away 51 runs in 20.1 overs which included five maidens.

Likewise, Sonu Devkota and Ariyo Paudel picked up two wickets each, while Abhishek Basnet claimed one.

In reply, Sheikh was not out on 41 runs off 49 balls with eight fours, while Ayushman Bam and not out Ashok Paudel hit nine and seven runs respectively.

With the score of 61/3 in the second innings for GHCA, the total reached to 381, which was two more than HCA, and the team won the match with seven wickets in hand.

Sandeep Khadka claimed two wickets for the team on day two, while Pratish GC managed to take only one.

KATHMANDU, May 15: Biratnagar Titans spent the most in the first ever players’ draft ceremony held for the upcoming first... Read More...