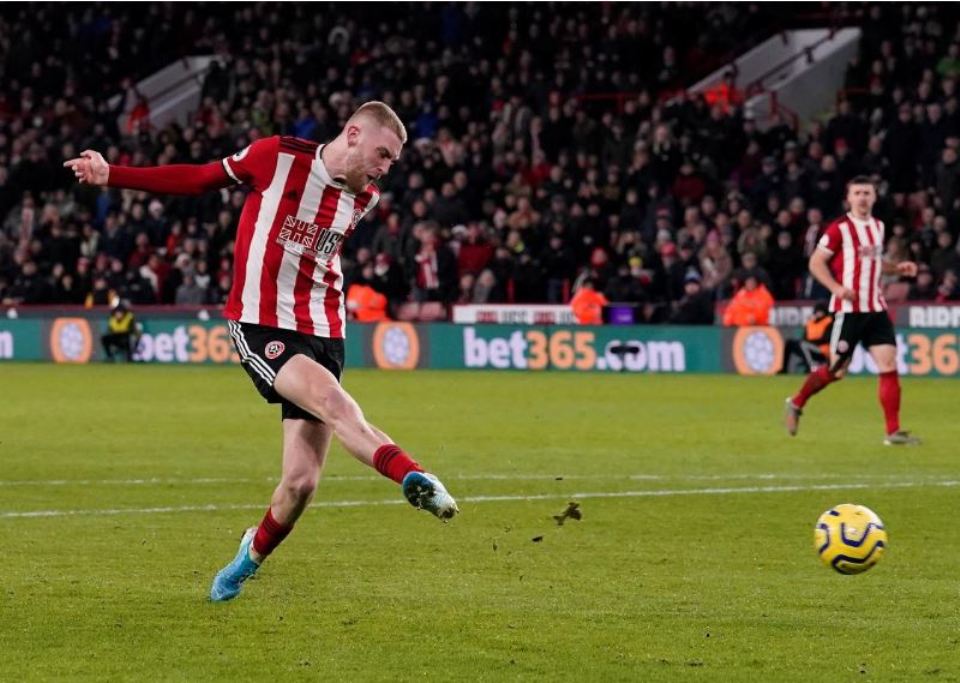 SHEFFIELD, Jan 11: Oli McBurnie’s goal earned Sheffield United a 1-0 home win over West Ham United but they needed a stoppage-time VAR intervention to secure the points that moved them to fifth place in the Premier League on Friday.

After a dismal opening period, the hosts were far livelier after the break and McBurnie tapped home after a mix-up between West Ham’s substitute keeper David Martin and defender Fabian Balbuena in the 53rd minute.

West Ham thought they had equalised in stoppage time when Robert Snodgrass fired home but a VAR check harshly ruled that Declan Rice had handled the ball in the build-up.

It was a let-off for Chris Wilder’s side as the ball was headed against the on-running Rice’s arm by a Sheffield’s John Egan before the midfielder played in substitute Snodgrass.

“We’re fuming, we’re livid,” Rice said. “It’s tough to take. He knocked the ball into my hand. There was no intention, it’s a real kick in the teeth. I think it’s the thought of every Premier League player, we don’t want to have VAR in the game.”

While West Ham, who lost keeper Lukasz Fabianski to injury early on, could feel hard done by, Sheffield United would have been kicking themselves if they had not won after failing to kill off the visitors having taken the lead.

“We got a decision but we have had two or three against us this season,” Wilder said. “We dodged a bullet late on but I thought we were in control in the second half.

“It’s a huge three points for us.”

It was a first loss for West Ham since David Moyes returned for a second stint in charge after Manuel Pellegrini was sacked on Dec. 28 following defeat by Leicester City.

They remain in trouble in 16th place, two points above the bottom three.

A flat first half was almost devoid of action, although Egan headed a chance over for the hosts and Felipe Anderson spurned a chance for West Ham after running on to a flick.

Sheffield United were far livelier after the break and John Fleck had a shot blocked by Pablo Zabaleta before firing a follow-up effort wide of a gaping goal.

West Ham then imploded. Keeper Martin played a pass out towards Balbuena who appeared to have his feet stuck in concrete, allowing Fleck to nip in before squaring for McBurnie whose shot went under Martin’s body and in.

Martin redeemed himself by saving well from Lys Mousset who failed to capitalise on other opportunities before West Ham belatedly began to threaten.

Sebastien Haller had a goal ruled out for offside and bounced a header over while Manuel Lanzini’s free kick was well-saved by Dean Henderson who has now kept eight clean sheets this season, the joint most in the Premier League.