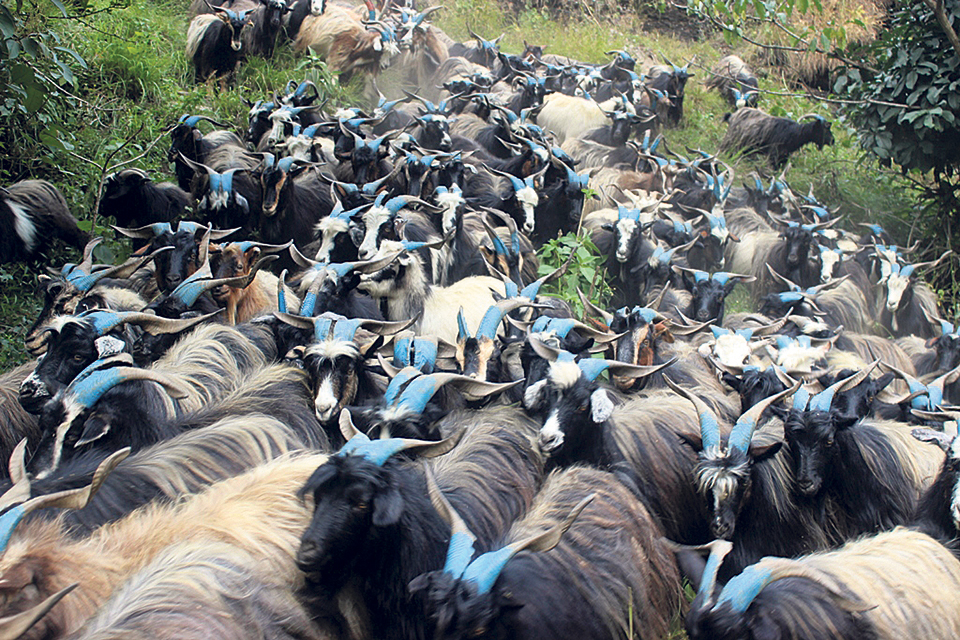 MYAGDI, Sept 22: Pashupati Silwal, a trader from Kathmandu, reached Upper Mustang for fetching sheep and mountain goats for Dashain, the great festival of Nepalis that is just round the corner.

Silwal, who has been trading goats and sheep for more than a decade, reaches the farmers' barns every year to buy the herd for Dashain. This time, he bought mountain goats for Rs 18,000 to Rs 24,000, slightly dearer than the price he paid last year.

It is expected that the price would go up Rs 2,500 to Rs 3,000 per mountain goat this year, in comparison to previous years.

"We book after traveling to the upper regions. The price increases every year," Silwal said.

He said the increased demand of mountain goats from Upper Mustang has resulted in increased price even in the farm.

The sheep and goats are supplied to the Nepali market from different rural municipalities of Mustang, Dolpa, Mugu, Jumla district of Nepal and Jhongwasen district of Tibet. Charang, Lomanthang, Ghami, Surkhang, Chonhup, and Choser of Upper Mustang are considered pocket areas for sheep farming.

Narayan Kusum, chief of Veterinary Hospital and Livestock Service Expert Center for Myagdi-Mustang, said there has been increased attraction toward sheep and mountain goat farming because of sufficient grazing land, good market price, and availability of technical assistance.

"It is the main source of income for farmers residing in the upper regions. We only send healthy sheep and mountain goats to them," he said.

According to him, approval for transportation is provided only after health examination followed by the issuance of health certificate. Livestock technical team is deployed at the border point of Mustang and Myagdi for health examination and collection of statistics.

The condition of the Beni - Jomsom road section is not good enough, making it hard for the traders to transport goats and sheep out of the district.

"The price is high in the farm, and we need to pay taxes at different places," Mekh Bahadur Nepal, a trader, said. He said the numerous taxes make it difficult for traders to sell the products at lower price.

On an average, sheep and goat worth over Rs 10 million are traded from Myagdi and Rs 350 million from Mustang during the Dashain season.

Import of sheep and mountain goats starts through Tatopani