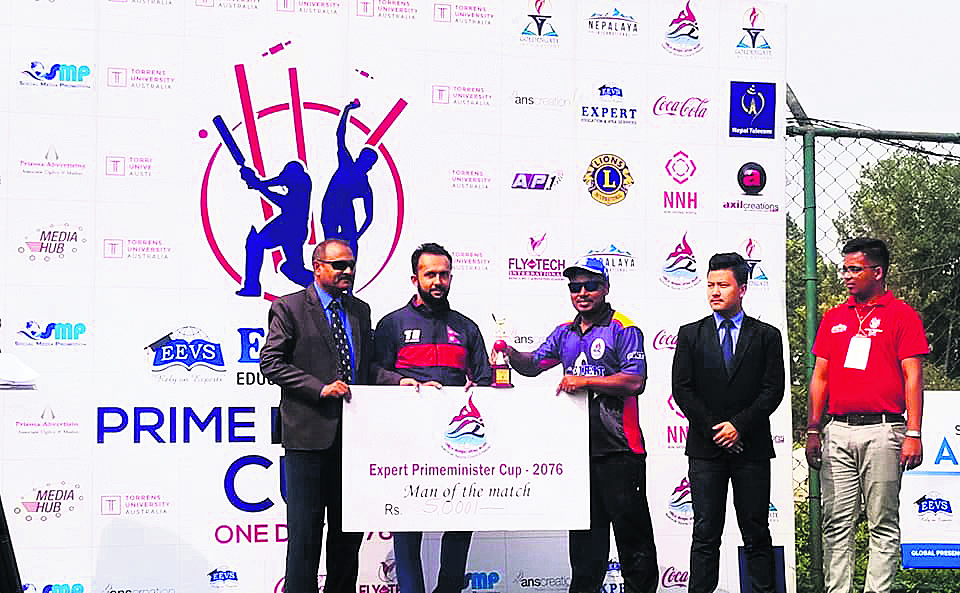 Puspa Thapa (right) of Province 1 poses with the player-of-the-match award after the Prime Minister Cup one-day cricket tournament match between Province 1 and Karnali Province at the Tribhuvan University Cricket Ground in Kirtipur on Friday. Rajan Shah/Republica

Karnali was chasing the target of 229 runs before getting bundled-out for 47 runs in 20.1 overs to succumb to a 181-run defeat against the Province 1 during the Group B match.

Nischal Rawal scored 17 runs as none of the Karnali batsmen were able to reach double figures. Skipper Rabindra Jung Shahi’s six runs was next individual high score of the innings which collapsed like a pack of cards.

Player of the match Thapa conceded 19 runs from his 9.1 overs in the match and dismissing six batsmen including Rawal and Shahi.

Similarly, off-spin bowler Mukund Yadav chipped in with three wickets completing his 10 over spell conceding 22 runs. Both bowlers registered a maiden each. Province 1 used three bowlers in the match with Kamal Khatri, the third one, scalping one.

Earlier, Karnali had won the toss and invited Province 1 to bat first. Former national player Siddhant Lohani scored 63 runs off 90 deliveries which included seven boundaries before getting retired out at the end overs.

Lohani twisted his ankle in an attempt to take a run. The injury is said to be a minor one and he is expected to be fit for next match.

Similarly, Firdose remained not out on 45 runs off 37 deliveries which included two boundaries and two sixes. Likewise, opening batsman Sunny Pun and skipper Thapa chipped with 34 (off 63 deliveries) and 29 runs (off 42 deliveries) respectively.

Province 1 scored 228 runs for the loss of eight wickets at the end of 50 overs. Province 1 became second team to play full 50 overs after Province 3 did the same in the opening match of the tournament.

In the second match of the day, Armed Police Force (APF) Club registered its third win on the trot defeating Gandaki Province by six wickets in the Group-A match played at Mulpani Cricket Stadium in Kathmandu on Friday.

Sharad Vesawkar was adjudged player of the match for his all-round performance as APF shoot up to the top of the points table. APF won the toss and elected to bowl first. Bowlers evenly distributed the wickets as Bhuvan Karki led the charge with a three-wicket-haul in a one-sided affair.

Aakash Thapa, Bipin Khatri, Rahul Sharma and Kishore Mahato contributed 19, 17, 14 and 15 runs respectively in a rather forgettable day for Gandaki.

Opening the batting for APF, Vesawkar top-scored 35 runs during the chase. He shared a partnership of 26 runs with Aasif Sheikh, who contributed 20 runs, for the first wicket.

Similarly, he and Pradeep Airee in partnership added 53 runs. Airee stayed unbeaten on 33 runs. Sheikh smashed two fours and two sixes each during his 19-ball stay whereas Airee faced 30 deliveries and hit five boundaries and a six.

APF completed the chase in 23 overs for the loss of four wickets.  Shrestha picked up three wickets for Gandaki whereas Mahato supported with a wicket.

Tribhuvan Army Club will face Nepal Police Club in a departmental derby scheduled at Kirtipur on Saturday whereas Province 1 and Province 2 will face off at Mulpani.