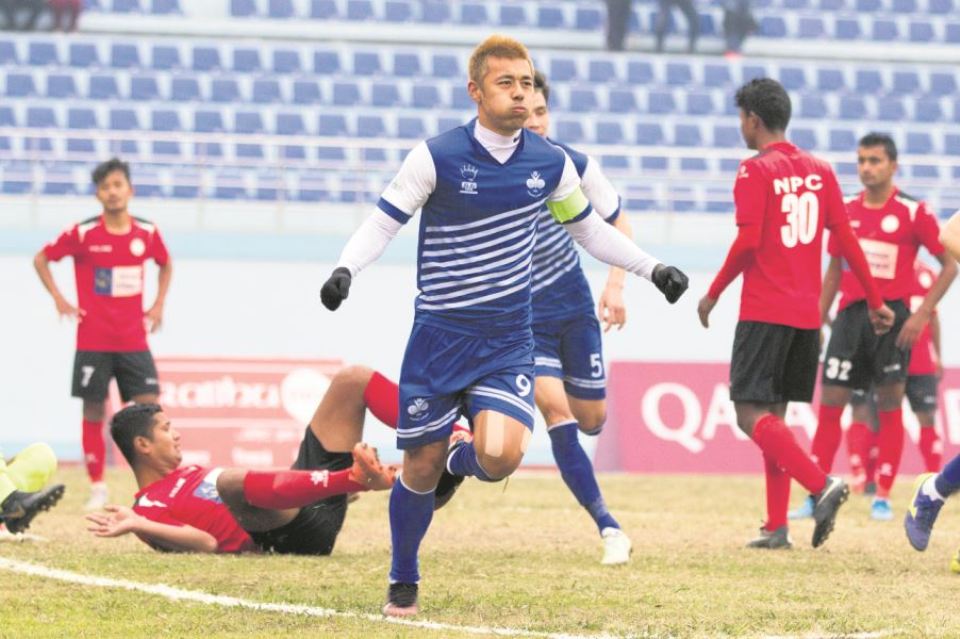 Earlier, Three Star Club recovered from a 2-0 slump at the hands of the other departmental team Tribhuvan Army Club to defeat Brigade Boys Club 3-1 and move third with its third win in the league campaign so far.

In the late kick-off at the Dasharath Stadium in Tripureshwar, much was expected from Shahukhala as he was on 99 goals after scoring three in the first two league games against Sankata Club and Machhindra Club, but he went goalless in the next two against New Road Team (NRT) and Jawalakhel Youth Club. In the game he could not score, Chyasal lost both its matches.

“I always used to play good in league, but I did not get chances in the national team as a first choice player. I used to feel very bad because of that,” Shahukhala said, “I will surely return to the national team if required.”

Shahukhala added that completing 100 goals in the league was not his top priority.

“I don’t have any feeling of the 100 goals I’ve scored in the league. I am focused on how to get good results for my team and take them to a good rank,” Shahukhala explained. “It is my individual achievement to score 100 league goals, but winning games for my team is more important.”

“There was no pressure for me to complete the century of goals,” Shahukhala joked, “I don’t follow the social media too much. So I didn’t feel any pressure.”

Both the teams were in attacking mode in the first half as they created chances and got some opportunities from the set pieces. Police dominated Chyasal in the early part of the first half, but Chyasal got back to rhythm and played balanced football.

Shahukhala scored his 100th A-Division League goal as he equalized in the 18th minute as he scored through a rebound as Police shot-stopper Shatrudhan Kumar Chaudhary could not get the ball to his grasp after a free-kick from Chyasal midfielder Hemant Thapa.

Suman Lama restored Police’s advantage five minutes to half time as he scored his third goal of the season smashing the ball into the top corner from inside the box.

Shahukhala again proved to be a headache for Police as he converted in a searching pass from Hemant Thapa Magar and put it past the keeper with a delightful finish into the bottom corner.

Shahukhala has been fantastic this season, except in the games against Jawalakhel and NRT as the team could not keep up with the rhythm of their attacking prowess.

Shahukhala already has five goals in as many games this season for Chyasal helping the team register a win and denying Machhindra and Police of losses with equalizing goals against both of them.

Police got a chance to add more in the first half as Tej Tamang hit a strong shot, but Chyasal goalkeeper Alan Neupane saved it in the 37th minute.

It got another chance in the 45th minute as goal scorer Rai took a free-kick, but the ball hit the crossbar after keeper Neupane managed to get a fingertip to the ball.

Chyasal started building attacking momentum in the second half with good passing football and pressed high denying Police to break through counter attacks and blocking the en route to goal from the flanks.

Bal, who was pretty silent in the last two Chyasal games, took a shot from inside the box in the 60th minute, but Police keeper Chaudhary saved the shot. He had another shot in the 89th minute, but Chaudhary was well onto the shot to save it. Playmaker Hemant Magar, who made two goals for Chyasal, hit a shot from outside of the box 10 minutes from time, but the ball grazed over the crossbar.

Sushan Shrestha gave Three Star the lead in the 15th minute, while center back Ananta Tamang scored his second goal of the season heading in a corner from Mikchhen Tamang in the 41st minute to make the score 2-0.

Wasiu Olandiran Hazmat put the game beyond all doubt scoring in the 58th minute for Three Star.

Brigade’s Dipenk Raj Singh was directly shown a red card after his poor tackle on Ashok Khawas in the 66th minute that led the team to a big defeat.

Roshan Rana Magar pulled a goal back for consolation for Brigade in the last minute of the match.

On Thursday, Armed Police Force Club will take on Sankata Club, while Tribhuvan Army Club will have a chance to go top with a win against Saraswati Youth Club later on the same day.

KATHMANDU, Sept 23: The most important aspect in the development of football in a country is considered to be a regularly... Read More...