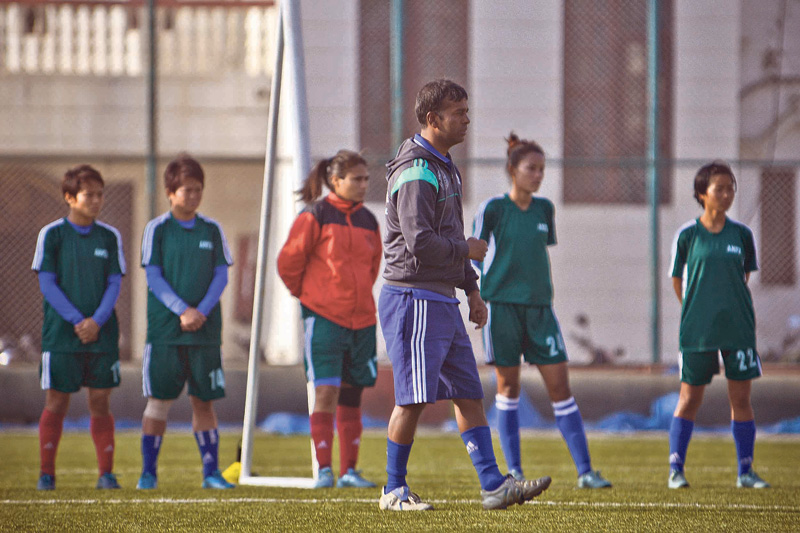 KATHMANDU, Dec 10: Seven new faces have appeared in the final 20-member squad of Nepal’s national women’s football team announced on Thursday for the upcoming fourth edition of SAFF Women’s Championship to be held in Siliguri, India from December 26 to January 4.

The remaining 13 members of the national squad were part of the team that reached the final of the last edition of the SAFF Championship held in Pakistan.

“As the new players in the team are young, they are very quick and physically strong. We chose them as they offer something different to the squad,” head coach Kumar Thapa commented on the new faces.

Among the new players, Anjana is goalkeeper while Gita, Kabita and Manjali play in defense. Similarly, Sharmila, Saru and Nirmala are forwards.

“They also have better fighting spirit which will be key for the team to cope the pressure in the championship,” added Thapa.

While finalizing the squad, head coach Thapa stated that he has given priority to the players who can play in multiple positions.

Players like Dipa, Saru, Nirmala, Sharmila can play both in midfield and attack. “We have midfielders who can play as attackers and attackers who can drop to the midfield and do the job. Our two full backs are very quick and can help the attack when needed. So these kind of players will be very useful to fully implement our playing style,” added Thapa.

Nepali team which will leave for India either on December 22 or 23 is in the last phase of preparation and will face Malaysia women’s national football team on December 17th at ANFA ground, Satdobato.

“We are in final phase of preparation. So now we are focused on the tactical part of our game. We are working on team set up and preparing the players to adjust well to their positions,” said Thapa.

The women’s team had played two practice matches against ANFA Academy U-16 team which it lost by 5-0 and 5-1 respectively. “We played against boys’ team and those friendly matches were played to check whether the players can cope with physical challenge or not,” added Thapa.

Nepal, which had reached the finals of the last three editions, is pitted in Group A along Bhutan, the Maldives and Sri Lanka while Group B comprises of India, Afghanistan and Bangladesh.

Nepal will kick off the championship facing Bhutan on December 26 while it will vie against the Maldives two days later. Similarly, Nepali will play against Sri Lanka on December 31 in the last group stage match.

Five killed, 37 others injured in bus-truck collision in Kohalpur
13 hours ago