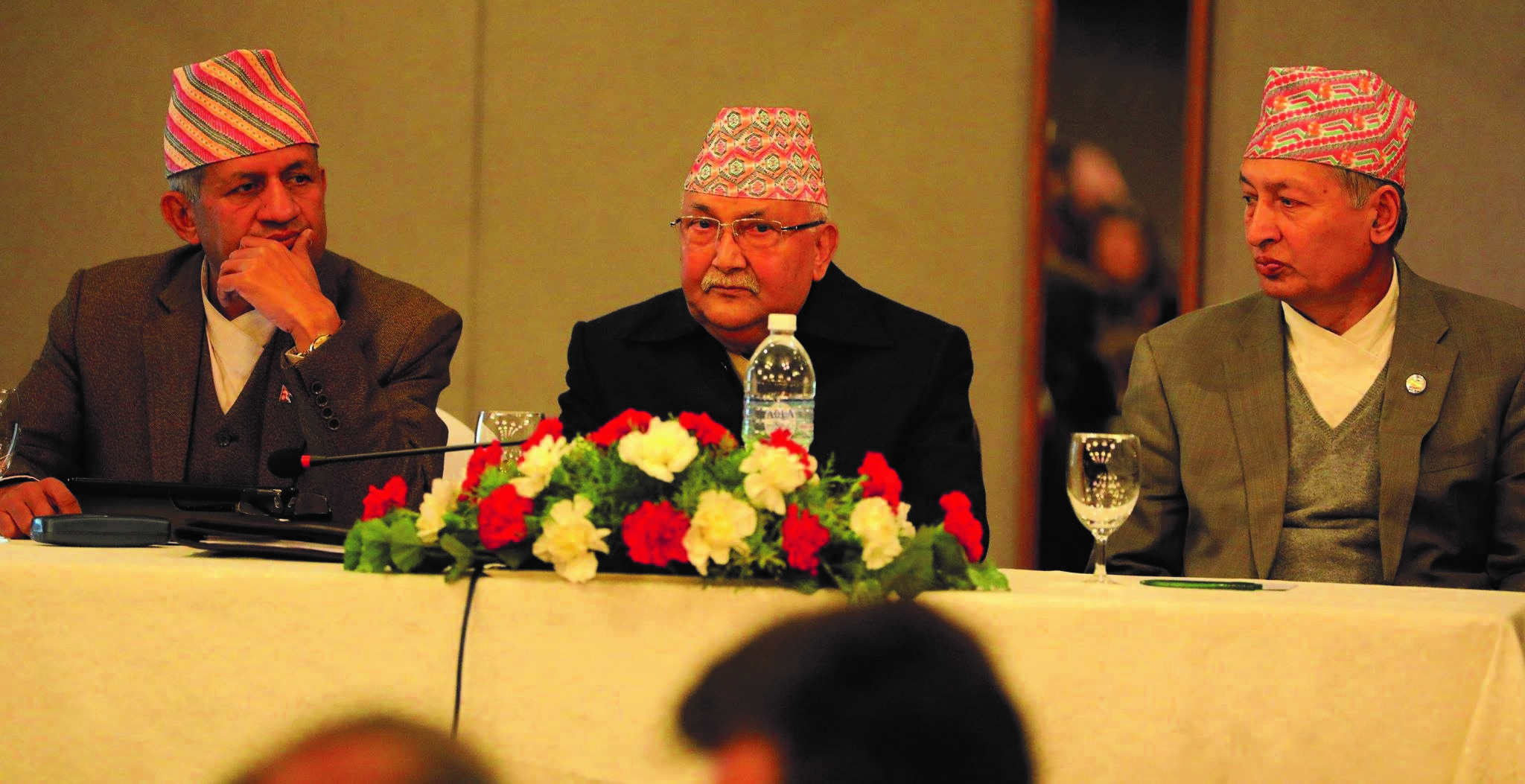 The government of K P Sharma Oli has completed one year. He was appointed the head of executive with the support of then Maoist Center and CPN-UML (which later merged into Nepal Communist Party) on February 15. Even though Rastriya Janata Party has pulled out, the government still enjoys overwhelming majority support in the parliament.

At a time the government has been criticized for failing to deliver as per its promises, PM Oli and his co-chairman in the party Pushpa Kamal Dahal are discussing cabinet reshuffle. They are reportedly trying to bring in new faces in the cabinet by replacing some of ‘underperforming ministers’ and changing the portfolios of others. People are closely watching how they will be able to reshuffle the cabinet, for remaining works of party unification at the grassroots level are yet to be accomplished.  Meanwhile, PM Oli has ruled out immediate reshuffle.

Prime Minister Oli has insisted that the government has a clear vision, steadfast commitment and result oriented action plan and has asked his ministers to perform accordingly. He keeps saying that leaders are obliged to serve the nation at any cost and they will be penalized if people question their performance. That’s how it actually should be but reshuffling cabinet alone won’t ensure accountability and enhance performance. Even if new leaders are selected as ministers, they will take at least six months to be familiar with the system and start delivering.  Within these months, these new ministers will be questioned for underperformance. So how long will the PM keep changing ministers?

Instead, if the prime minister and his existing cabinet colleagues work on to deliver on the promises they made before the elections, cabinet reshuffle would not be needed in the first place. The ruling party had come into power with the slogans of prosperity and development. Fed up with the chronic political instability, people pinned high hopes of peace, stability and development on Oli-led government. The failure to deliver on those fronts has deeply disillusioned the people.

The strong government formed for five years will be no different from the governments that served for nine months in the past if it fails to address the dissatisfactions among the people and within the party. Cabinet reshuffle is not the effective idea to do this.

As a matter of fact, the government has failed to deliver mainly because it continued with the tendency of nepotism and favoritism. Unless this is avoided, the government will remain weak.

An end to political instability is decisive for social development. We do not have the fear of instability anymore. Thus the government should create a favorable environment for attracting foreign investment and initiating long-term policy changes. The slogan of ‘Prosperous Nepal, Happy Nepali’ is good. It will take time to realize this vision, but if the government can take the right steps at the right time (which is now), it won’t be impossible to achieve prosperity and development. But one after other controversy the government is dragging itself in is not sending the good message. Controversial statement on Venezuela’s political crisis, failure to book the culprits of Nirmala Panta’s rape and murder and ban on political activities of Netra Bikram Chand led communist party have earned more criticism than praise.  Party members accuse the government of taking these decisions without discussing the issues with them.

Chand’s party is a breakaway faction of Maoist party. The government should have tried to address its concerns through negotiations. Even if some action had to be taken, it should first have been discussed inside the party. Chand has already hinted at retaliation. Some of his leaders are already underground and are carrying out violent activities. The government should be carefully dealing with them so as to avoid another round of conflict in the country.

The government should rule without compromising with core democratic principles. Any attempt to centralize all powers in the office of prime minister, as PM looks bent to, will surely become the subject of criticism.

The government that looked all powerful until a month ago is slowly losing support. While Rastriya Janata Pary Nepal (RJP-N) has opted out, Sanghiya Samajwadhi Forum also seems to be unhappy. If the latter also leaves out, the PM might have to prove vote of confidence in the parliament. Thus before restructuring the cabinet, it is important to keep the house in order and address the aspirations of people. This will keep the government strong and help it regain the public trust.

Exclusive: Up to 1 million COVID vaccines expired in Nigeria last month
9 hours ago