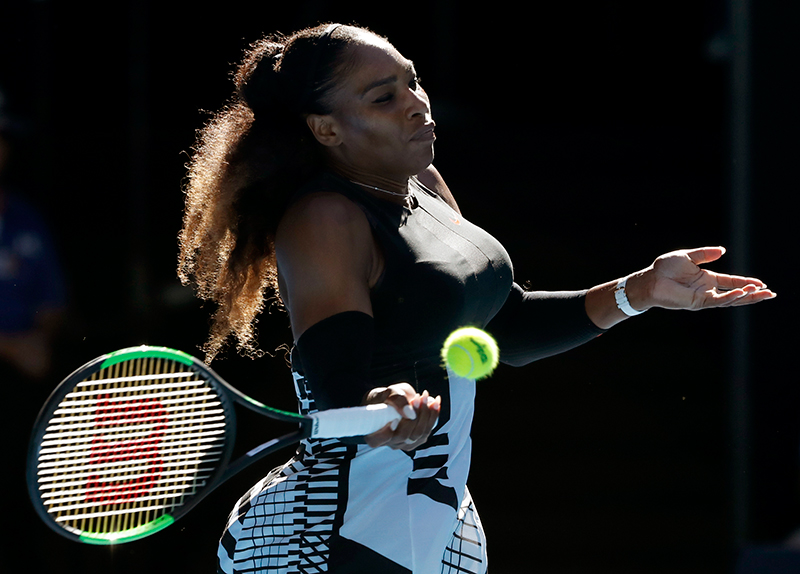 MELBOURNE, Australia, Jan 21: Serena Williams made the net seem much higher and the court much smaller for Nicole Gibbs, a first-timer on Rod Laver Arena.

It is little wonder Williams has an imposing presence — she's been playing on the Australian Open center court since 1998, and has won six of her 22 Grand Slam titles there.

Williams beat Gibbs 6-1, 6-3 in the third round on Saturday, and hasn't dropped a set as she progressed to the fourth round and continued her bid for an Open-era record 23rd major title.

The 35-year-old Williams didn't face a break point until she was serving for the match.

Dropping serve in that game was her only lapse in a match that then extended just beyond the hour — to 63 minutes to be precise. That made it one minute and one game longer than her only previous match against Gibbs.

"I don't have anything to prove in this tournament here. Just doing the best I can," Williams said. "Obviously I'm here for one reason."

Williams started the tournament with difficult assignments in the first two rounds, but also got through those — against Belinda Bencic, with a career-high ranking of 7, and Lucie Safarova, a French Open finalist in 2015.

"She makes the court feel very, very small," Gibbs said. "I was definitely feeling a lot of tension from early on in the match and it was showing in my serve and my forehand. I was catching the net a lot — the net felt 10 feet high today."

"An amazing fight," Makarova said of her first win over sixth-seeded Cibulkova, the 2014 finalist at Melbourne Park. "I got, to be honest, a bit tight at 4-0 in the second set. But I'm still here."

"We played fourth round last year and we had an incredibly close one," Konta said after her 6-3, 6-1 win over former No. 1-ranked Caroline Wozniacki. "I'm ready for a battle and it will be nothing short of that."

Mirjana Lucic-Baroni continued her unlikely run with a 3-6, 6-2, 6-3 win over Maria Sakkari, and so did American qualifier Jennifer Brady.

Before this week, the 34-year-old Lucic-Baroni hadn't won a match at Melbourne Park since her debut at the Australian Open in 1998. The 19-year gap in between match wins at a Grand Slam tournament broke the record set by Kimiko Date-Krumm, who went 17 years between match wins at Wimbledon.

Lucic-Baroni reached the semifinals of Wimbledon in 1999 as a 17-year-old and captured the Australian Open doubles title a year before that with Martina Hingis.

She next plays Brady, ranked No. 116, who had never played in the main draw of a major before she qualified for this week.

By saving five match points before rallying to beat Heather Watson in the second round, Brady effectively doubled her number of career wins.

On the men's side, Uzbekistan wild-card entry Denis Istomin followed his upset win over defending champion Novak Djokovic with a 6-4, 4-6, 6-4, 4-6, 6-2 victory over Pablo Carreno Busta.

Istoman became the lowest-ranked player — at 117 — to beat a second-seeded player at the Australian Open in a match played on Rod Laver. His third-round match was out on Show Court 2. He probably won't mind — it's the first time since 2015 that he's won three straight matches at tour level.

The 37-year-old Karlovic's win in the first round set an endurance record — the 84 games in the win over Horacio Zeballos, which ended 22-20 in the fifth, was an Open-era mark for the tournament.

At 37, Venus Williams into 10th Wimbledon semi; Konta next