Seminar on Hydropower held at Embassy of Nepal in Beijing 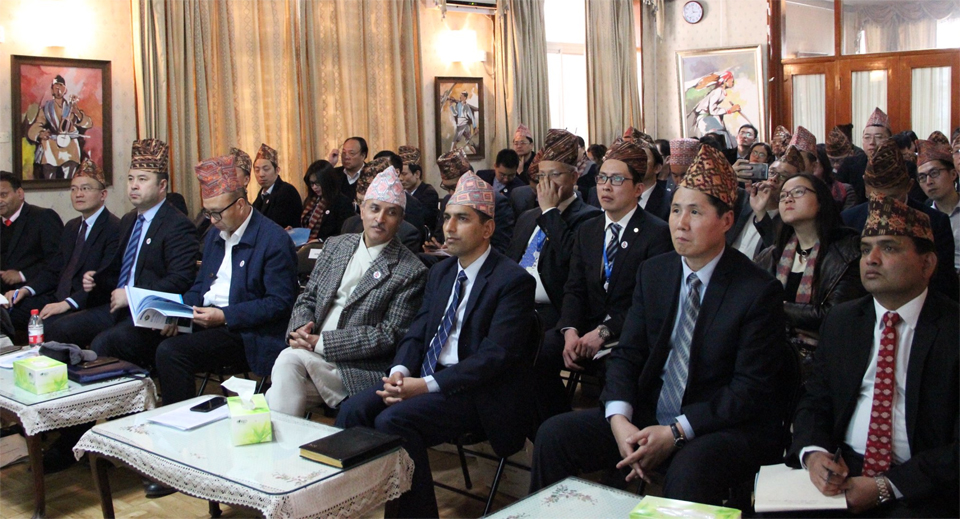 KATHMANDU, Mar 24: A seminar on Investment Opportunities in Hydropower Projects in Nepal was held at the Embassy of Nepal, Beijing on Friday.

The program brought together prospective Chinese investors as well as senior officials of three hydropower-related companies of the Government of Nepal for interactions on facilitating Chinese investments in Nepal’s hydropower sector.

More than eighty participants including representatives of the National Energy Administration of the People’s Republic of China, and public and private sector companies, as well as government officials and media persons, participated in the event, according to the Press Release issued by the Embassy of Nepal in Beijing.

The Minister for Energy, Water Resources and Irrigation of the Government of Nepal, Barsha Man Pun sent a message of good wishes for the success of the Seminar.

In his message, the Minister said that there are ample opportunities for investment and cooperation in power sector development in Nepal, and invited Chinese investors in the development of the country's hydropower projects.

In his opening remarks, Nepali Ambassador to China Leela Mani Paudyal said that the year 2018 is a year of new beginnings in Nepal after the successful conclusion of three tiers of elections, paving the way for political stability and good governance, reads the statement.

Highlighting the Government’s policy of attracting foreign investment, he called on Chinese companies and entrepreneurs to utilize the opportunity for investing in Nepal's hydropower sector by taking full advantage of its enormous possibilities and the government's favorable industrial and investment policies.

The seminar featured presentations on various aspects of hydro-electricity development in Nepal, and the areas for potential investments in the generation, transmission and distribution of electricity in the country. Dr. Surendra Kumar Upreti, Board Member of Electricity Generation Company Ltd, introduced the government's policies and legal instruments for the generation, transmission and distribution of electricity, as well as on the financing requirements and modalities of hydropower projects in the country.

In his presentation, Dr. Netra P Gyawali, Chief Executive Officer of National Transmission Grid Company Ltd., focused on the investment potentials in the transmission networks to evacuate the power generated from hydropower generation stations in various parts of the country, and described the Government’s Transmission Master Plan with a target of building 1500 Transmission Lines and 20 substations by 2025.

Similarly, CEO of Hydroelectricity Investment and Development Company Ltd., Chhabi Raj Pokhrel, outlined the strategies for resource mobilization and the company's business models for the development of hydro-electricity projects in the country.
The Seminar had constructive discussions on streamlining legal, institutional and procedural mechanisms for further attracting foreign investments in Nepal’s hydropower sector.

Earlier, Binod Prasad Acharya, Minister (Economic) made a brief presentation on the prospects for investment in Nepal and shed light on the industrial and investment policies of the Government of Nepal.

Sushil K Lamsal, Minister and Deputy Chief of Mission, in his closing remarks, summarized the seminar's deliberations and said that the discussions indicated that Chinese investors have a lucrative outlet for investment projects in Nepal's hydropower sector.

He also thanked the participants for their constructive suggestions and assured that a comprehensive follow up would be made based on their suggestions to further facilitate Chinese investments in Nepal.

Indian Embassy Camp In Nepal, hit by minor blast In April, to be shifted

The Biratnagar camp office, 380 kilometres from Kathmandu, was opened in 2008 for relief work after the embankment along the... Read More...

There is no point in asking for resignation of Working Committee: CAN President Chand
44 minutes ago