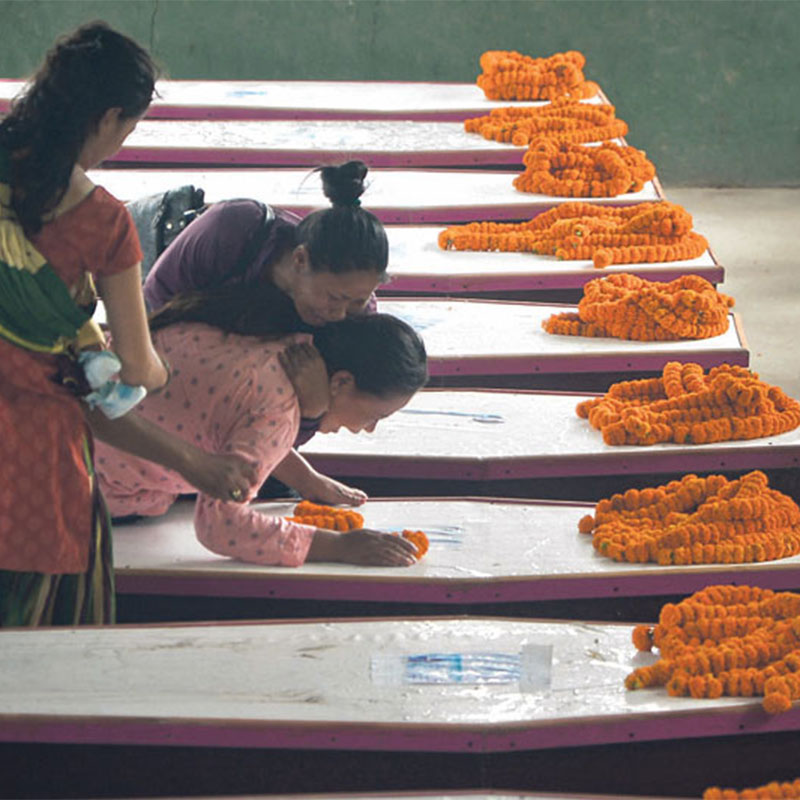 We should prioritize employment generation, while also looking to ensure the safety, security and dignity of migrants
The senseless killing of 12 Nepalis at the hands of the Taliban in Kabul last month sent shockwaves across Nepal. The deaths plunged the country into deep anguish. The recurrence of heinous crimes against innocent Nepalis who go abroad in search of opportunities is disheartening, with serious implications for the country’s future.

It was a heart-wrenching scene at the airport on June 22nd when a Nepal Airlines flight brought home the bodies of 12 Nepalis from Afghanistan—a fellow South Asian country. Government and opposition leaders strongly condemned the terror attack. Prime Minister KP Oli along with several senior government officials went to the airport to receive the bodies of fallen Nepalis. UN Secretary General condemned the Kabul attack and called for those responsible to be brought to justice. Government announced compensation of a million rupees each to the families of the Nepalis killed in Kabul.

Over 500,000 young Nepalis enter the labor market every year. Millions more are underemployed, unemployed, undereducated, and are struggling to eke out their daily living. They are forced to migrate because of perennial political instability, pervasive poverty, institutionalized corruption and chronic unemployment at home. It is sickening to see that 1,500 to 2,000 energetic and talented youths leave the country every day.

Some leave formally and some informally. Informal channels take them to unsafe destinations. There are no government mechanisms to trace and take care of these migrant workers. There are 110 countries open for foreign employment.

Nepal partially opened Afghanistan for employment in 2006-07. But after the Kabul attack, the government revoked permit for its citizens to work in Afghanistan as security guards at the UN offices, foreign embassies and other missions, and decided to impose a blanket ban on the travel of Nepali people to Afghanistan, along with bans on other destinations like Syria, Iraq and Libya. But the desperate youths continue to find loopholes to break such bans.

Nepal is the third largest recipient of remittance in the world relative to its economy (29 percent of GDP in 2015). Remittance has acted as a safety net for the balance of payment, contributed to development initiatives and for maintenance of rural people’s livelihoods. Though remittance supports the subsistence economy of Nepal, the country is also losing dynamic and energetic talent needed for nation-building.

The exodus has made agricultural lands barren and devastated livestock farming. Rural dwellers prefer consuming readymade products such as chow-chow, biscuits, breads and powder milk purchased from distant urban centers instead of producing them in their farms. The booming business is house construction, while productive sectors remain stagnant. Though some migrants come back with new ideas such as utilizing rainwater, using biogas and solar power, their talents hardly get utilized.

Family disintegration is growing. Large number of women come back home with unwanted pregnancy from rapes at their workplaces. Many people return sick and with disabilities. Long-time separation of married couples leads to divorces. Villages are turning into elderly homes. Social decay is on the rise. As the best and brightest brains go abroad, it has drained Nepal of much-needed skills. Since those going abroad are between 15 and 45, it affects human capital formation, leading to unintended long-term consequences.

Nepali people have demonstrated rare resilience and unique unity amidst diversity. They have great mobility and migration. Cross-border migration to India has been taking place since time immemorial. There has been more and migration to overseas countries in recent times.

About 75.5 percent of migrant workers are unskilled. Only 1.5 percent are skilled while 23 percent are semi-skilled. At least 10,000 Nepali migrant workers have died working abroad. More than 8,000 of these deaths were recorded in Malaysia, Saudi Arabia and Qatar: the three largest labor destinations. Deaths are also reported from other destinations, almost every day. It is sad that the desperate Nepalis are dying so young on foreign soil.

The country is struggling to retain intellectuals. It is thus time to have employment officially regulated and arrangements put in place for safety, security and dignity of migrant workers. The government is in no position to provide employment and guarantee rights to social security and unemployment benefits.

Government should prioritize investment in employment generation, and at the same time work to ensure the safety, security and dignity of its migrants. Investing in people is about securing the country’s future. So the government should establish ‘connective tissue’ between education and labour market. Increasing government capacity to spend could create employment opportunities for workers, even those without high education.

Long-term dependence on remittance poses serious challenges. With the current trend, Nepal might soon be a crippled nation. Only the fortuitous combination of honest leadership and democratic institutions backed by strong moral foundation will improve things.

Empty mind and stomachs are devil’s workshops. In the absence of sound policy, these workshops will manufacture only radical and destructive masses, and impose colossal social costs. Violent extremism is a growing threat. Strong region-wide anti-terror networks and sharing of intelligence are called for in order to alert migrant workers of dangers abroad and to address problems associated with terrorism. Political rhetoric without well-planned programs will only breed anger and despair, no matter how populist and patriotic such narratives may be. Only sound political leadership will secure the country’s future.

Declining water levels in our snow-fed rivers means that our hydroelectricity potential is slowly being depleted ... Read More...

LONDON, June 23: Voters in Britain are deciding Thursday whether the country should remain in the European Union — a... Read More...

Two arrested with drugs in Rautahat
15 minutes ago