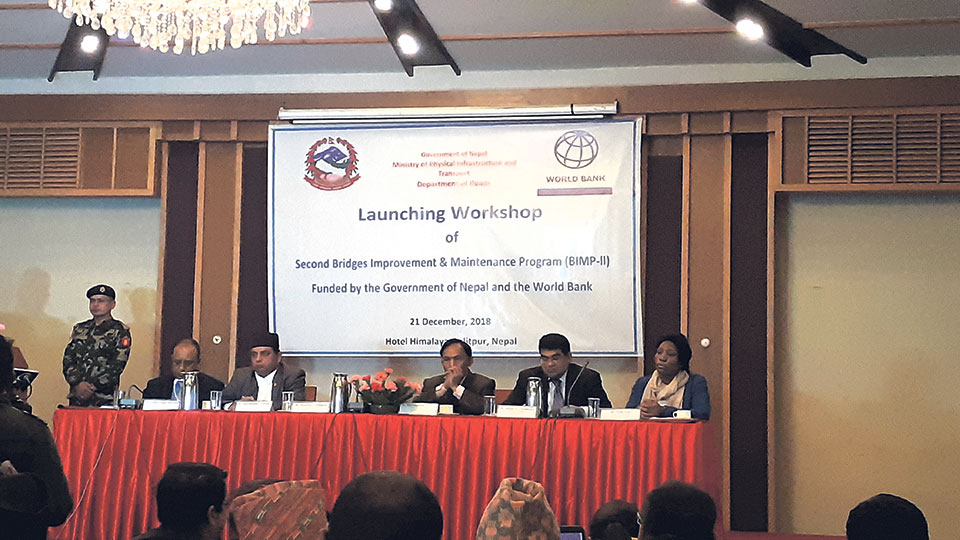 KATHMANDU, Dec 22: The Department of Roads has started the second phase of nationwide bridge maintenance project on Friday.

The project aims to repair vulnerable or damaged bridges along the major highways across the country and enhance their durability.

The project, named Second Bridges Improvement and Maintenance Program-II (BIMP-II), is a joint project of the Government of Nepal and the World Bank, who are contributing US $ 63 million and US $ 119 million, respectively.

The five-year-long project was preceded by another five-year project of bridge maintenance worth Rs 7 billion, which maintained several bridges across the East West Highway and other highways.

The first phase that ran from 2012 to 2017, with contribution of US $ 60 million from the World Bank and the rest from the Government of Nepal, had upgraded bridges in different states.

The percentage of bridges in good condition was 85 at the end of the first phase, up from 50 percent in 2012 when the project started.

The second phase will also build 14 new bridges along the Mugling-Narayangadh road section, which was completed this year. Bridges for maintenance are yet to be identified.
The project will conduct risk assessment of the vulnerable bridges along the main highways. New bridges will replace the old ones if needed.

There are about 2,200 motorable bridges across the country and about 400 of them are along the main highways. Another 1,450 bridges are in different stages of construction, according to Rabindra Nath Shrestha, director general of the Department of Roads.
Naresh Man Shakya, senior divisional engineer, said details are yet to be prepared about particular bridges to be included in the project.

“We will prepare a three-year maintenance project based on need assessment. Construction of new bridges begin thereafter,” said Shakya.

RUKUM, Dec 4: Work on a bridge at Garaghat over the Sani Bheri River that connects Musikot Municipality-1 and Bafikot Rural... Read More...