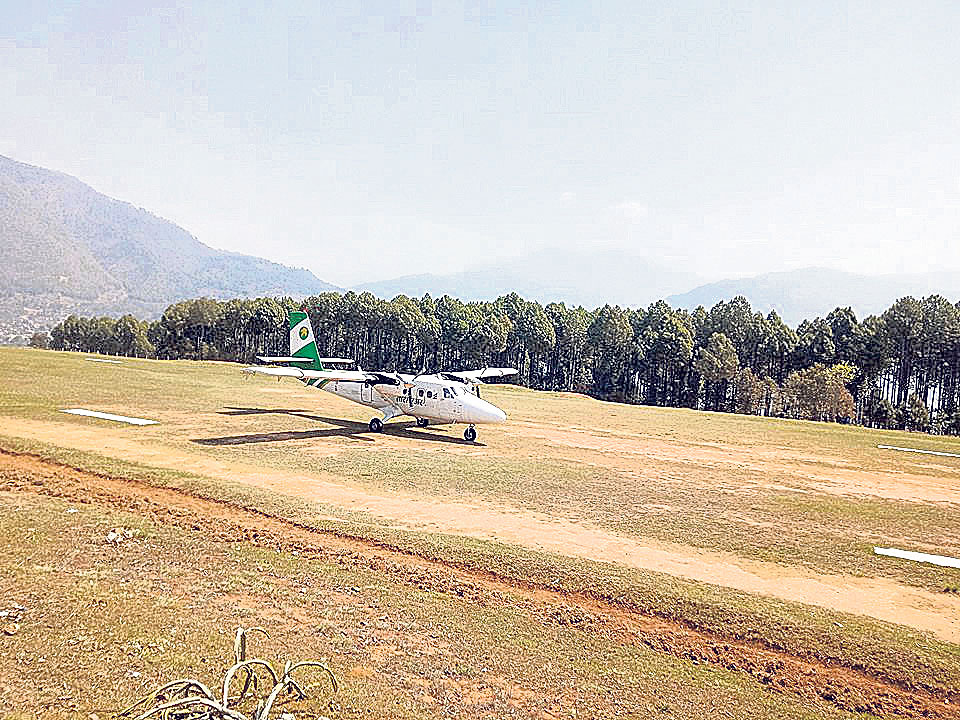 KATHMANDU, March 24: Along with the assurance of seat occupancy from local level bodies, domestic airlines companies have started flight operations to several domestic airports that have remained non-operational for many years.

Flights resumed at Balewa airport in Baglung district on Friday, after almost three decades of the airport’s closure. With the resumption of the airport, Baglung will now be just 45 minutes away from Kathmandu via air route. There will be two flights every week, on Sundays and Thursdays, to be operated by Tara Air and Nepal Airlines Corporation (NAC). The airport remained shut after the construction of Pokhara-Baglung Highway in 1991.

“We considered the locals’ requests and worked toward getting the airport back into operation,” Poudel said, adding that the airport could be an alternative of Pokhara airport.

Likewise, Dang airport also resumed operation two months ago following understanding between Dang Chamber of Commerce and Industries (DCCI) for seat occupancy. Tulsipur Sub-Metropolitan City has now taken up the responsibility of handling the airport. The airport is supposed to operate one flight per week.

Established in 1961, the airport was in operation until 1995 and since 2014 the airport gets completely closed. “Currently we are facing a problem meeting the local’s demand,” Jhalendra Kharel, information officer of Tulsipur Sub-Metropolitan City, said. “There is a demand for more aircraft on this sector.”

Meanwhile, air service providers have recently assured that flights on the Kathmandu-Surkhet sector would resume soon. Flights in this route were halted since the Indian blockade in 2015.

Birendra Prasad Shrestha, spokesperson for Civil Aviation Authority of Nepal (CAAN) hoped that more non-operational domestic airports will come into operation soon. He said that if airlines companies agreed to operate flights, CAAN would have no problems to bring the airports back into operation.

DHANKUTA, Jan 29: Opening of the Tamor Corridor Track remaining as the shortest route to link hills and Tarai has... Read More...