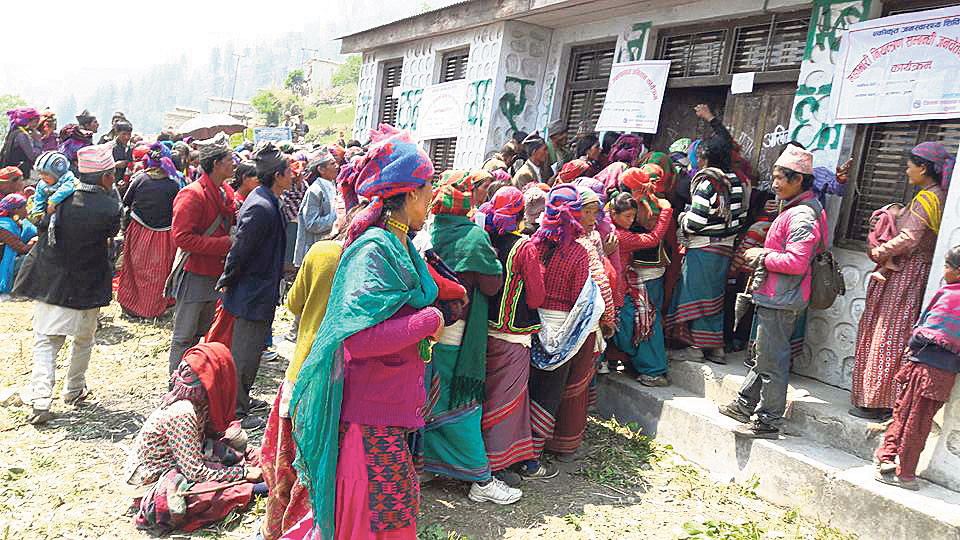 People form queues to get their health checked at a health facility in Humla district in this recent photo. Photo: Dhan Bahadur Budha/Republica

People are dying in lack of medicines, say local authorities
HUMLA, Jan 27: Seven people from several parts of Humla have died reportedly due to seasonal flu over the last three weeks. The deceased are from Chankheli, Kharpunath and Sarkegand areas, according to government authorities.

The deceased have been identified as Madan Shahi, 45, Junkala Shahi, 50, Datiram Sarki, 65, Gori Sarki, 60, and Pauri Shahi, 60, from Masidhara of Chankheli Rural Municipality – 6. All the deceased were chronic patients of asthma, according to doctors.

“They were suffering from seasonal flu. Cold, cough, fever had bothered them,” said assistant CDO of Humla Duttaraj Hamal.

Referring to the reports collected from the locals, assistant CDO Hamal said that the victims were showing symptoms of cough, cold, fever and fainting which later resulted in deaths.

“In our village, hundreds of children and elderly people are affected by flu. They need medical intervention, but to no avail,” said Guru Karki, a local of Sarkeghat Rural Municipality. “You won’t find doctors or medicines at health posts and even in hospitals. Small health-related issue can easily kill you,” he added.

Meanwhile, assistant CDO Hamal assured that the problem would be addressed. He said that the District Administration Office has already directed the authorities concerned to supply medicines to all health posts without any further delay.

“As soon as we heard about people dying from seasonal flu, we issued strict directive to the health departments of all the rural municipalities to supply medicines to all health posts right away. We have also urged health workers to remain on high alert,” he said.

The district hospital data shows about 40 to 50 patients are now visiting the hospital every day. Th number is slightly higher than in normal days and the rise in the number is attributed to outbreak of flu, according to the hospital.

“Around seven people come with symptoms of flu. For other kinds of problems we have to properly examine the patients before saying anything,” said Dr Nabin Rokaya of the hospital. “We have noticed constant rise in the number of patients with flu over the past few weeks,” he added.

Kali Bahadur Budha, chief of health branch of Chankheli Rural Municipality, lamented that the rural areas remain extremely neglected in terms of health facilities. “Even when so many people have been suffering from flu, the department concerned pays no attention. People are dying simply in lack of medicines,” he said.

According to health workers at Unapani of Sarkegad Rural Municipality–3, they cannot provide medicine to service seekers as there is no stock of medicines in health posts. “Over 30 patients visit every day asking for medicines, but we have to send them empty handed,” said Nanda Ferara, a health worker from Unapani. “The rural municipality has not supplied medicines here,” she added.

Health Directorate of Karnali Province however stated that it has not been formally notified of the issue. According to spokesperson of the Ministry of Health and Population, Mahendra Shrestha, the ministry is yet to receive formal information about the spread of seasonal flu. “But informally, we have taken notice and have asked for reports from health posts,” he said.

(Ganesh Bishu from Birendranagar also contributed to this report)

HUMLA, June 14: Locals at Galfagad at Adanchuli Rural Municipality-2 in Humla district have been suffering from viral fever for... Read More...

Jeep airlifted to Humla at a cost of Rs 1 million

HUMLA, August 9: A pick-up jeep was airlifted by a helicopter to Simikot, the district headquarters of Humla, after it... Read More...