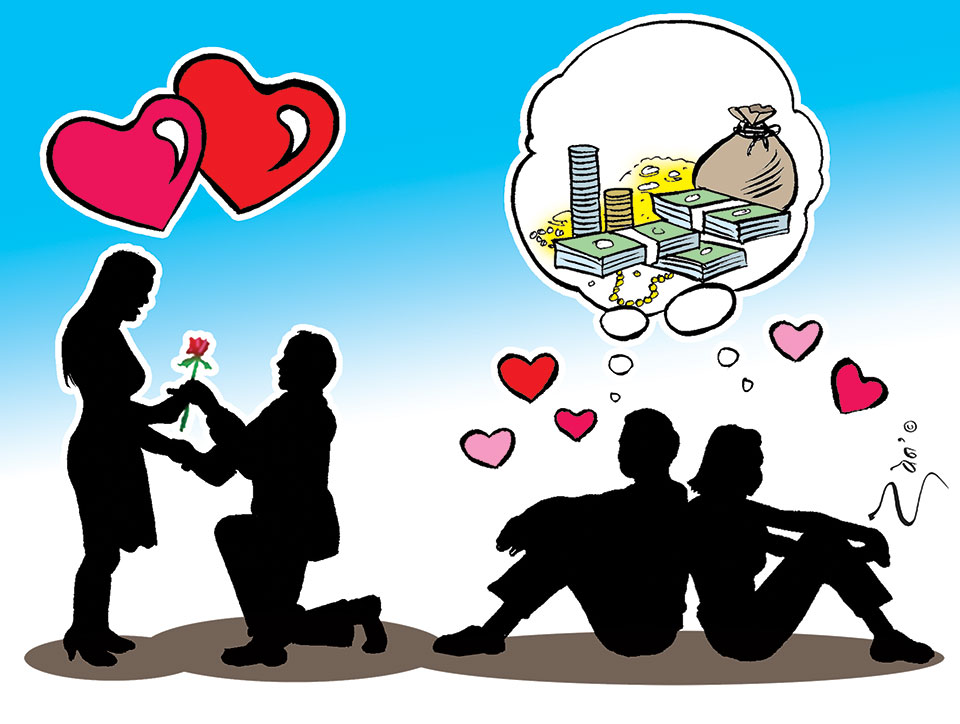 February comes forth as a month of romance for everyone. It brings in thoughts of spring. Blooming flowers, birds and so many other nice things, but recently something else made its presence felt in our part of the world:  The Valentine’s Day. Just the word brings forth visuals of balloons, flowers, candies, gifts and cards exchanged by the young generation on that day. A look at the stores, before Valentine’s Day, gave ample representation of the importance placed on it, especially, by the younger generation.  All the lavish cards and candies and everything in red and pink were all gone off the shelves by the day’s end on Valentine’s Day.
This February 14, youth of Nepal celebrated Valentine’s Day. But it took me way back to Boston, during the 80s.

I recall my sons’ bringing in cards they made at school, and giving them to me saying, ‘will you be my Valentine?’ Every year, I would laugh, hug them and say ‘yes’.  It was all the same.  There was nothing out of place considering the lifestyle in the US.   All children did that to their moms every Valentine’s Day. When we returned to Nepal, February 14 was just like any other day of the month.  The only reason I remember it is because my friend’s birthday falls on that day.

For some people, it holds some sort of symbolic meaning. My conversations with young people regarding Valentine’s Day brought forth some very interesting comments and reactions.  Some professed to have friends praying to God to help them find their dream boy/girl friend to celebrate with every year but without success. While some others thanked God for finding that special person for them. Almost like Valentine was the God of love. I don’t want to disappoint them, but Valentine is not a God. It is entirely possible that the youth of Nepal have no idea as to who Valentine is and why the day to commemorate him is celebrated. Let me explain.

Know Valentine
St Valentine is that mysterious saint after whom the day is celebrated. What exactly did he do to get all that attention?’Well for that we will have to get into a bit of its history. Don’t be surprised if I tell you that this particular celebration contains remainders of both Christian and ancient Roman tradition. Still it’s not clear as to who Saint Valentine was, and how his name became associated with this celebration? There seem to be three different saints by the name Valentine or Valentinus, recognized by the Catholic Church in the past, who were killed because of their beliefs.

Of the many stories, one story has it that Valentine was a priest who served during the third century in Rome.  At the time Emperor Claudius II ruled Rome.  He thought single men were more efficient and made better soldiers, than those with wives and family.  So he decided to outlaw marriage of young men.  Priest Valentine realized the injustice of the decree. Hence he defied Claudius’s decree and continued to perform marriages of young people in secret.  Of course this could not stay hidden for long. When Priest Valentine’s actions were discovered, he was punished, as Claudius ordered him to be put to death.

There is another story that suggests Valentine helped imprison Christians to escape the harsh Roman prisons, where they were tortured and beaten. It is entirely possible he was killed for that. Now all these stories do not quite mesh in with today’s celebration.

There is yet another story that suggests Valentine to be one of the prisoners facing prison cruelty.  He actually appears to be the first to write a “Valentine” greeting to a young girl, probably the jailor’s daughter, who frequently visited him in the jail. As a result of her frequent visits, he fell in love with her. Supposedly, before his death, he wrote her a letter and signed, “From your Valentine,” at the end of the letter. This expression is still very much used.  It is also believed that Charles, Duke of Orleans, wrote a poem to his wife, while he was imprisoned in the Tower of London, following his capture at the Battle of Agincourt. Several years later King Henry V, hired a writer, named John Lydgate, to compose a valentine note to Catherine of Valois.

Although the truth behind the Valentine’s story is murky, one thing is clear.  All the stories emphasized the Valentine as a sympathetic, heroic and romantic person. By the middle ages, his reputation prevailed and Valentine became one of the most popular saints in England and France. Now this makes more sense. But why does he have to be commemorated in February?

Celebrating romance
Some believe Valentine’s Day was celebrated during the middle of February to celebrate the anniversary of Valentine’s burial probably around 270.  Still others believe the selection of this particular time for the Valentine’s Day celebration, might be the Christian church’s decision to “Christianize” the pagan celebration of Lupercalia: a fertility festival, dedicated to Faunus, the Roman God of agriculture, as well as to the Roman founders Romulus and Remus.

At the end of the fifth century, Lupercalia was outlawed because of its cruelty and “un-Christian” behavior.  That is also the time Pope Gelasius declared February 14, St Valentine’s Day. Much later the day became definitively associated with love. The popular belief during the middle ages in France and England was that February 14 was the beginning of birds’ mating season, which also reinforced the idea of celebrating Valentine’s Day as a day for romance.

Finally, there is no doubt Valentine’s Day is special for everyone believing in love.  Would you believe approximately 145 million Valentine’s Day cards (not counting classroom-made valentines) are exchanged annually, making Valentine’s Day the second most popular card-sending holiday after Christmas in the US?  Now that is something. There is so much hatred, fear and negativity in the world, compared to love, compassion, respect and positivity. Learning to love or share love is definitely an asset. Loving and learning to love does not need to be prompted by Valentine’s Day. Parents should teach their children to love, and to share love as an everyday affair.

Singer and actor, Harry Styles was reportedly robbed at knifepoint while on a night out in London. International websites state that the 26-year-old was... Read More...

Chocolatebox Nepal has been in operations since November 2017 and it’s well on its way to live a long life.... Read More...